Hit a home AV run with these choices 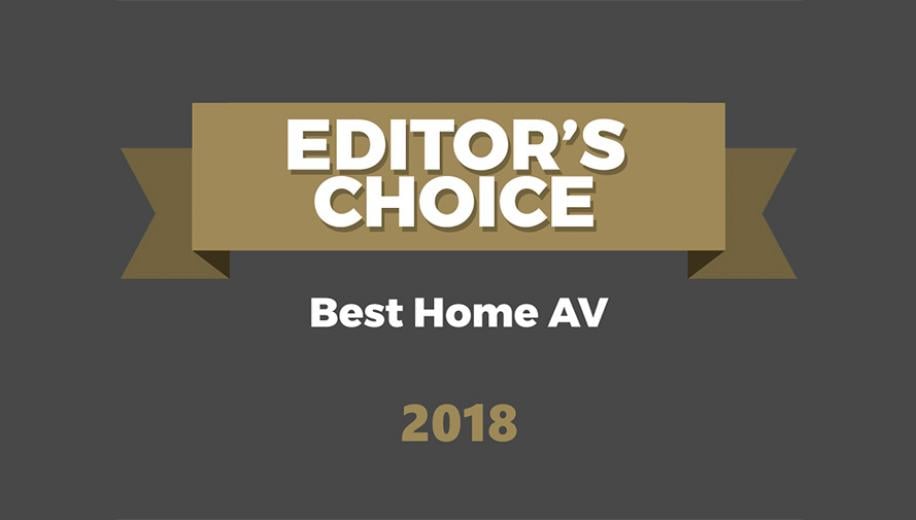 Welcome to our second annual Editor’s Choice awards.
The Editor’s Choice Awards celebrate the best products of the year. They are the items we think stand head and shoulders above the rest. The criteria for being eligible are simple. It must be a product that has been reviewed by AVForums in the last 12 months and it must currently be available as part of the official product range from a manufacturer and not discontinued before the end of 2018.

This year we present the awards for TVs & Projectors, Home AV, Hi-Fi and Mobile. In this article, we select our favourite products of the year in Home AV: Q Acoustics are no stranger to awards and their revamped 3050i Cinema Pack picked up a Best Buy badge thanks to its competitive price and superb sound quality. The 3000i Series includes innovations first introduced on the Concept 500, which explains the impressive performance of these updated speakers. The package includes the excellent 3050i floorstanders, combined with the equally as impressive 3090Ci centre speaker, resulting in a solid front trio. The 3010i bookshelf speakers make for a decent set of surrounds, creating a tonal balance that seamlessly steers effects from speaker to speaker.

The dispersion of the speakers could be a little wider, so some toe-in isn't a bad idea, but otherwise they're hard to fault at this price. The front floorstanders, and even the surrounds to a degree, are capable of a surprising amount of bass extension but the 3060S slimline subwoofer fills in the sub-sonics. It could be better in terms of getting down deep, but the combination of the 3050i and 3010i speakers means the entire system has a cohesive sense of bass. In fact they're ideal for movies, TV and music, making them our choice for the best home cinema speakers under £1,500. The Bowers & Wilkins 700 S2 Series is another set of speakers that have benefited from innovations first introduced in the flagship range, in this case the company's 800 Series. The new Continuum cone is particularly effective, but the Carbon Dome tweeter and Aerofoil Profile bass driver play their part too, resulting in speakers that are significantly more neutral than previous B&W models. However, they also retain a sense of excitement and joy, that is so important when dealing with speakers aimed at the home rather than a professional environment.

This 5.1 system worked as a genuinely cohesive unit with the floorstanders, centre speaker, and standmounts delivering an effective tonal balance. The high frequencies were precise, the midrange well-defined, and the bass was ably assisted by the DB4S subwoofer. The 700 Series sounds best when partnered with amplification that has the power to really push them, delivering a taste of the performance found on the flagship 800 Series but at a relatively affordable price. In fact, you'll struggle to find a better all-round set of speakers, which is why they're our choice for the best home cinema speakers over £2,000. REL may have been concentrating on subwoofers for two-channel use recently, but the company still makes some excellent budget home theatre models as well. The HT/1003 is a case in point, which not only offers exceptional value but also punches well above its weight. It's relatively small but well-made, nicely styled and discreet, making it easy to install in your lounge or dedicated home theatre. The HT/1003 has been specifically designed for use with movies, so it drops certain features normally found on REL subs that are intended for movies and music. Set-up is straightforward, and the HT-Air is a useful option that allows you to connect the sub wirelessly, thus eliminating the need to run cables across your room.

The HT/1003 will seamlessly integrate with your multichannel speakers, adding plenty of depth to the low frequency presence of the system. REL knows how to make a subwoofer, which explains how they have managed to get so much power out of something so small. However, the HT/1003 isn't just powerful, it is also controlled, fast and responsive, making it ideal for watching movies. If you're looking for a sub-sonic upgrade to your system, then this is the subwoofer for you. It's an affordable, compact and highly capable performer that will enhance any system or good quality soundbar that it's paired with. For that reason the REL HT/1003 is our choice for the best subwoofer under £1,000. The SVS PC-4000 is the cylindrical model in the company's 4000 range that also includes the PB-4000 and PS-4000. This range replaces the Ultra 13 range and incorporates innovations introduced in the Ultra 16 range. The SVS PB-4000 ported sub is a beast, but the cylindrical version delivers an almost identical experience with the added benefit of a much smaller footprint. In fact, if space is an issue then the SVS PC-4000 might be the ideal solution because it offers the kind of low-end performance that only a physically large subwoofer can create, but does so in a relatively small area. It's also flexible in terms of positioning, so you can place it in the corner and you'll be amazed at how unobtrusive it is.

Perhaps more importantly it's also good, delivering deep, clear and distortion-free bass with a surprising degree of subtlety. As a result, it can handle both music and movies, with a responsive tightness that suits the former, and the ability to deliver bass impact when required by the latter. The PC-4000 is also a bit of a bargain when you consider its build quality, features and performance, making it hard to fault. There's no auto EQ feature, which means for an optimal setup you may need to do certain things manually, but the smartphone app is excellent and is sure to delight tweakers. Overall, the SVS PC-4000 is a well made and expertly engineered subwoofer, and our choice for the best subwoofer over £1,000. The Sonos has made soundbars before, but they have been rather expensive and lacking key features. All that changed with the Beam, an excellent addition to the manufacturer's line-up. This compact soundbar delivered a surprisingly big soundstage from its diminutive cabinet, but is also considerably cheaper than the larger PlayBar. Crucially for AV enthusiasts, it now includes an HDMI connection with support for ARC (audio return channel). Of course, there's also Sonos's highly effective multiroom system, which includes the option to expand the soundbar to a full 5.1 system if you wanted. The Beam is easy to setup, although the lack of a remote control means you either use the Sonos app or your TV remote via ARC.

The manufacturer has taken a sensibly agnostic approach to voice assistants, and the Beam is already integrated with Amazon Alexa and, thanks to AirPlay 2, Siri. Google Assistant will be added later in the year. The Sonos app is well-designed and easy to use, even though it hasn't been fully optimised for AV products. The Beam's overall performance is impressive, with great stereo imaging, clear dialogue, good localisation of effects and a nice musical quality. The only area where the soundbar reveals its limitations is in terms of its low-end performance, which understandably lacks bass. However, the Sonos Beam certainly makes for a great all-rounder and is our choice for the best soundbar under £1,000. The Samsung HW-N950 builds on the success of the HW-K950 by addressing the limitations of that earlier model. The result is one of the best soundbars we've reviewed, and the only one that can deliver a Dolby Atmos and DTS:X experience using actual speakers. In fact the N950 is the first soundbar that can genuinely be considered an alternative to an object-based audio receiver and speaker package. The Samsung is a superb performer, delivering a genuinely immersive surround experience. The front soundstage is big and open, with added width thanks to the side-firing drivers, but the dialogue always remains clear. The wireless subwoofer is also very effective, providing a solid foundation of bass to the entire system.

The use of identical drivers gives the system excellent tonal balance and the steering of effects is particularly effective, while the upward-firing drivers at the front and rear work extremely well, delivering a clear overhead presence. Whatever the content, the N950 will excel, but it really gets a chance to shine with Atmos and DTS:X soundtracks. The attractive design, decent build quality and extensive features round off what is an impressive package. There are no other soundbars that offer this level of genuine immersion, and while it isn't cheap, you'd struggle to build a comparable separates system for less. As a result, the Samsung HW-N950 is our choice for the best soundbar over £1,000. The Denon AVC-X8500H is the company's new flagship AV amplifier and, with its 13 channels of amplification, it is clearly aimed at the enthusiast. As a technological statement of intent it's genuinely impressive, boasting all the features you would expect from a modern AV amplifier, with the exception of a built-in tuner. However it's the addition of 13.1-channel processing that elevates the X8500 above any other AV amplifier or receiver that's currently available, offering a level of immersion that can only be achieved with considerably more expensive high-end AV processors. Thankfully, Denon has also made sure that the included amplification is up to the job, ensuring there is actually sufficient power to drive all 13 speakers without running out steam and retaining a degree of headroom.

As a result, the X8500 sounds fantastic with both music and movies, but it's with immersive audio content that it really gets a chance to shine. Regardless of the particular speaker configuration you choose, this amplifier can handle the soundstage with remarkable assurance, effortlessly steering effects around the room. It also has sufficient power to deliver impact where necessary, whilst retaining a delicate touch when it comes to the more subtle aspects of the soundtrack. This remarkable amp not only takes multi-channel surround sound and immersive audio to a level previously only available on high-end AV processors, but it does so whilst also providing all the necessary amplification. For that reason the Denon AVC-X8500H is our choice for the best AV amplifier of the year. Oppo won this award last year but, sadly, the company withdrew from the AV market in 2018. Thankfully, the Panasonic DP-UB9000 arrived in the nick of time, helping to keep high-end enthusiasts happy. It's a fantastic 4K Ultra HD Blu-ray player that's beautifully designed, well made, and has state-of-the-art video features. There's the latest version of the HCX processor, Dolby Vision and HDR10+ support, as well as the HDR Optimiser feature which can help with the tone mapping on less capable displays. There are also all the main video streaming apps, with 4K, HDR, Dolby Vision, and even Dolby Atmos options, where available.

The audio side of things is equally as impressive, with separate power supplies, studio grade DACs, and audiophile components. There are dedicated two-channel phono and balanced XLR analogue outputs, along with 7.1-channel analogue outputs. The UB9000 is fully certified by THX, has an excellent remote control, and boasts some very useful on-screen displays. It's also extremely quiet in operation, and the video and audio is superb over HDMI. Our only complaint is the lack of SACD and DVD-Audio playback, but aside from that, this is a worthy successor to the Oppo and our choice for the best 4K Ultra HD Blu-ray player of the year.