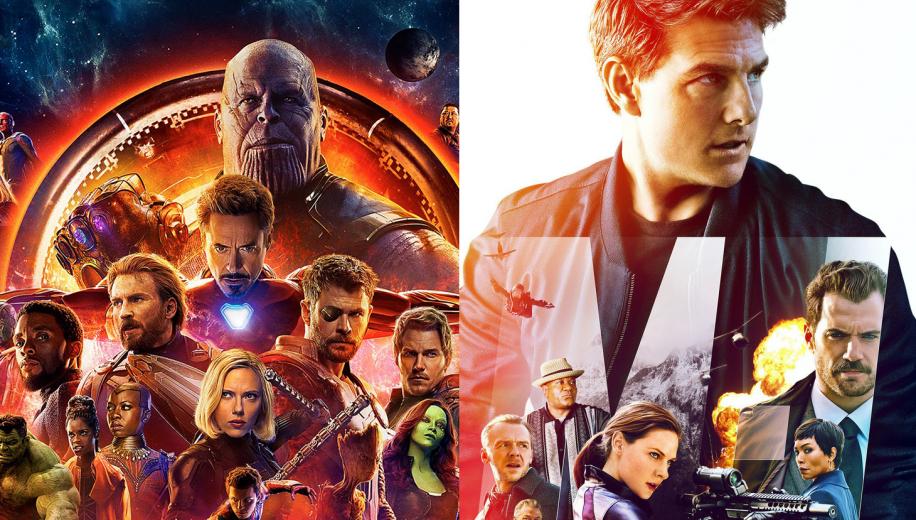 From superhero ensemble to spy thriller ensemble, 2018 has been packed with immense big hitters as well as quieter gems, managing to actually deliver two blockbuster outings which comfortably make the top 10, whilst providing plenty of potential Oscar Winners, Box Office hits and future Cult Classics along the way.

There are really too many to include on complete list, so noteworthy mentions go to everything from Tully to First Man, I, Tonya to Netflix's Annihilation, Isle of Dogs to Creed II, Leave No Trace to Galveston, Mary Poppins Returns to Bumblebee. Whatever your individual Top 10s may be, these are 10 movies from 2018 which you have to see. Writer/director Paul Thomas Anderson's eighth film makes for a fitting end to the illustrious career of master actor Daniel Day Lewis, reuniting after the magnificent There Will Be Blood for an unsurprisingly mesmerising, and finely nuanced tale of love and meticulous obsession.

Out now on disc: Phantom Thread 4K Review.
Also recommended: Netflix's The Other Side of the Wind Review. Doubling down on laughs and effects, Deadpool 2 is a superb sequel, enjoying all the irreverent humour that made the first one so great. Although the plot absorbs a hell of a lot of action movie cliches, it also juggles them surprisingly well, retaining a witty light edge to the proceedings which helps them just about escape the fatal flaw of being completely and utterly predictable (which they are, if you weren't too busy laughing your ass off to realise). Having Sheridan back to do the screenplay, and the late, great composer Jóhann Jóhannsson (who did all of Villeneuve's work so far, including Blade Runner 2049) replaced by his collaborator and cello soloist on Sicario, Hildur Guðnadóttir, almost compensates for the lack of Villeneuve himself, with Gomorrah director Stefano Sollima cutting his teeth on his first US production by cleverly electing to follow the line of imitation being the best form of flattery, placing the coolest man on the planet Benicio del Toro front and centre, going full tilt.

Adapted from an article in the New Yorker, The Old Man & the Gun is understated and subtle in all the right ways. Forget your fancy editing and shiny effects, it harks back to a bygone era of old style good storytelling with Robert Redford supplying all the goods to make this film exquisitely charming with a wonderfully understated and nuanced performance.

Out on disc in the New Year.
Also recommended: All is Lost Blu-ray Review. Bradley Cooper delivers a dazzling directorial debut with this third remake of A Star is Born, catapulting Lady Gaga to Big Screen stardom and perhaps even earning himself an Oscar in the process. The perfect marriage of ingredients, A Star is Born is a slow-burning but nonetheless captivating drama, bursting with some tremendous song tracks, an intoxicating chemistry between its two leads, and career-definining roles for the both of them. It's no surprise that the film has already received Oscar whispers.

Out on disc in the New Year.
Also recommended:The Greatest Showman 4K Review.

5. YOU WERE NEVER REALLY HERE

Taxi Driver meets Man on Fire by way of Nicolas Winding Refn in Lynne Ramsey's tremendous Joaquim Phoenix-starring thriller. Gifted a Cliff Martinez-esque score from Radiohead member Jonny Greenwood (who did the tremendously oppressive score for There Will Be Blood, along with just about all of Paul Thomas Anderson's films) which anchors the brutal and intoxicating feature in a world of pulsing beats and discordant tones, You Were Never Really Here is to Taken what Drive is to a Fast & Furious film, with Ramsey exhibiting a trademark Refn style in her exploration of brutal, sudden violence, unspoken trauma and haunting symbolism. Chocked full of memorable moments and standout setpieces, A Quiet Place benefits most from a commitment to character depth and natural family interaction, and even if you enjoy it above the level of its symbolic parental horrors - with Krasinski (and Blunt spurring him on behind the scenes) intent on emphasising the parental metaphors, addressing both the fear that even the slightest mistake on the part of parents could cost their children dearly, as well as the cost of said fear on both parents and their children - it still provides one of the most memorable horror journeys of recent times, sitting comfortably alongside its standout brethren like the Oscar-nominated Get Out. A minor future classic. Three Billboards Outside Ebbing, Missouri is a fabulously acted mystery drama, rich in characterisations and compelling in subject. It's stars well-earned their respective awards for Best Actress and Best Supporting Actor, and writer/director Martin McDonagh's third feature is his best yet; a perfectly tuned blend of black comedy and tense drama that is utterly unmissable. Marvel's Avengers return for the world's biggest ever blockbuster ensemble - superhero or otherwise - with the stunning Infinity War. After an unprecedented build-up of some 18 films, Marvel have accomplished the seemingly impossible, delivering an all-star climax to a journey they've had plotted out for a decade. With the climax, End Game, prepped for imminent release, the only thing preventing this from hitting the top spot is the big question as to whether or not the conclusion will be able to make good on the game-changing shocks of Infinity War. Considering we're six films into this franchise, it's astounding that they've managed to build it up to quite this degree, and credit to Cruise and McQuarrie for delivering on all counts. It's not only the best entry in the series, and not only one of the best summer blockbusters of the year (although, admittedly, Infinity War - were it not Part 1 of 2 - would otherwise best it), but also the best of its kind - better than any Bond film of late, or any of the last three Bourne films. It'll take quite some effort for the next film to beat this one but I can't wait to see them try. This isn't Mission: Difficult, after all, it's Mission: Impossible!

Should we keep the TV licence?