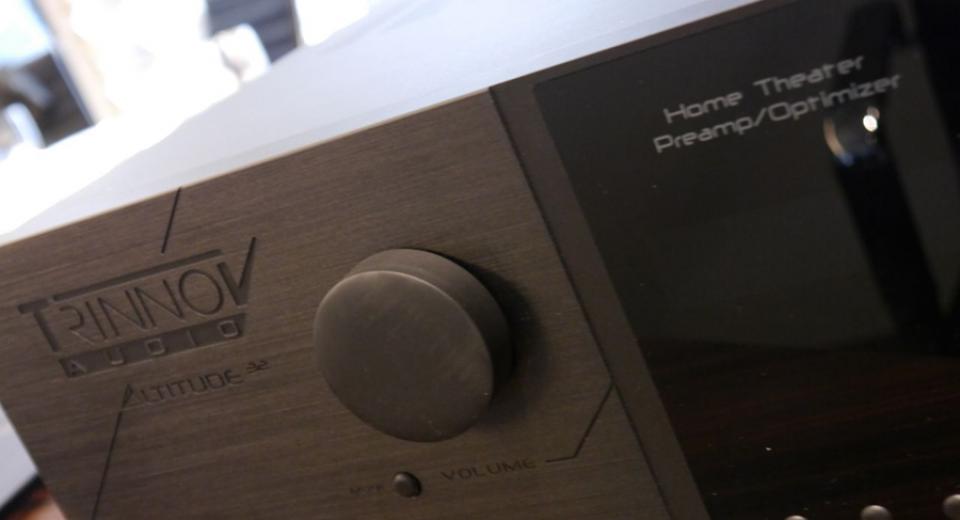 Trinnov Audio Altitude16 AV Processor (2014)
SRP: £13,000.00
With at least two, and possibly more, immersive audio formats being launched, what you really need is a processor that can handle all the current variants and add more when necessary.

Enter Trinnov Audio’s new Altitude32, a 32-channel processor that can handle both Dolby Atmos and Auro3D, as well as anything else the consumer electronics industry plans to send our way. The reason for this incredible processing power, flexibility and upgradability is evident when you look at the back. The Altitude32 is built around an Intel motherboard - the rear connections for which give away the secret inside - and as such it uses a Linux platform to perform all its processing. There are no DSP (Digital Signal Processing) chips inside, at all, and Trinnov Audio are not dependent on third parties.

What this basically means is that not only is the processing in the Altitude32 more powerful than any currently available DSP chipset but it also means that you don’t need to add new chips if another format becomes available. Instead you can just perform a flash firmware update, allowing the Altitude32 to always remain current. Of course, all this technology doesn't come cheap and the 16-channel version of the Altitude32 with both Dolby Atmos and Auro3D will set you back a cool £19,900. So, who are Trinnov Audio and what makes the Altitude32 surround processor worth that kind of investment? Trinnov Audio are a French company that was originally started back in 2000 doing research into 3D sound. They produced the world's first fully-working 3D immersive audio chain (recording - transformation - reproduction) in 2001. This early work was based on an ambitious approach that used high order ambisonics to process the acoustic fields rather than audio signals. They registered their first patent in 2002 and formed Trinnov Audio in 2003. Since then, the company has been working closely with a number of industry partners, helping to push the boundaries of more immersive 3D surround formats.

Trinnov Audio realised that increasing the channel count in a surround system means more speakers and thus more room interaction, so they have been working in ways to effectively optimise all these additional speakers. In 2007 they installed a Trinnov Optimiser at McGill University to handle 24 speakers and 12 subwoofers. In 2008 they launched a 22-channel home theatre in the United States and in 2009 they worked with Japanese broadcaster NHK to develop a 22.2-channel system. The following year they installed a 2 x 24-channel optimiser at Toho Studios and in 2010 IMMSound used a Trinnov Optimiser in their immersive cinema sound system

The latter was bought by Dolby after the release of Atmos, giving Trinnov Audio an opportunity to be involved with the new format from the very beginning. In 2012, France Televisions installed a Trinnov Optimizer into its 22.2 system and last year Technicolor installed a 40-channel Trinnov Optimiser into their 3D sound research lab in Hanover. As you can imagine, it's Trinnov Audio's expertise at room optimising multi-channel surround formats that has been their primary business over the last few years and their algorithms and processing are considered the best currently available.

Trinnov Audio have been been researching into multi-channel room optimisation for over a decade.
It was this expertise that led to their Magnitude32 32-channel room/speaker optimiser, a revolutionary product that was designed to handle acoustical issues in any multi-channel installation. In fact, even the best installation can suffer from non-linear energy spread, late reverberations, early reflections and phase issues from perforated screens; whilst typically speaker placement is also almost never ideal. The Magnitude32 can cure these problems through a suite of conventional processing features such as EQs, delays and bass management but also 3D acoustic analysis, 4-way intelligent crossovers, digital room/loudspeaker correction and 2D/3D speaker remapping.

Naturally, the impact of the room on a systems' acoustics applies just as much to two-channel audio as it does to multi-channel and Trinnov Audio has also applied their expertise to this area. The Amethyst is a two-channel preamplifier that can accept 11 sources, including phono, and includes a digital media renderer, 24-bit/192kHz DAC, built-in WiFi client and access point, 2-way intelligent active crossover and room/speaker optimisation. Now Trinnov Audio have combined all their experience with room/speaker optimisation and especially the Magnitude32, into a 32-channel pre-amp and processor that can handle any of today's - and tomorrow's - immersive multi-channel surround formats.

The result is the Altitude32 which combines an Intel-based hardware platform with Trinnov's proprietary room/loudspeaker optimising and speaker remapping technology. The Altitude32 has been designed to support even the most ambitious 3D sound installations. It already supports both Dolby Atmos and Auro3D decoding and upmixing, as well as being the only processor that can decode, render and process up to 32 Dolby Atmos channels. It can also perform 3D loudspeaker remapping and be upgraded for any new 3D sound formats, such as DTS UHD, via a software implementation. There will also be an upgrade to HDMI 2.0 (specified for 32 channels) in the near future. The technology behind Trinnov's room/speaker optimisation starts with the basic concept of applying corrections based on measurements of the speakers in the acoustic environment, using pink noise, a graphic EQ, a microphone and RTA (real time analyser). The Trinnov Optimiser uses a unique approach and proprietary algorithms to precisely measure the acoustic response of several points in the room; any variations in the acoustic responses are due to acoustic problems. The system then classifies these problems and corrects each of them using the most appropriate method. The Optimiser uses multi-point measurements and a time/frequency analysis engine, along with 4-way active crossovers, loudspeaker/room optimisation, bass management and EQ.

The problem for any processor or receiver that offers both Dolby Atmos and Auro3D, is that the speaker placements for each format are very different. That means it isn't as simple as just decoding the two formats and sending the audio to each channel. The Altitude32 uses 2D and 3D remapping to address this problem. The optimisation process uses a 3D measurement microphone to localise the speakers in the room and retrieve an accurate multidimensional loudspeaker map, which can also be used to provide speaker coordinates to object-based rendering engines. Since the input format and recommended speaker layout are known, along with the actual position of all the speakers in the room, remapping allows the Altitude32 to virtually reposition sources accordingly.

This mapping does not consist of simple gain and delays but relies on the patented acoustic field processing of Trinnov's early work. Using this technology, it is possible to establish a speaker layout that complies with several formats by using both angle tolerances and 3D loudspeaker remapping. A notion of focus is being implemented to create the required level of diffusion in the multidimensional soundstage. In the current context, Trinnov feels that loudspeaker remapping is the only real solution to the format war. This is because it ensures inter-compatibility between existing and future 3D audio standards, with an optimal use of speakers and the best possible spatial resolution.

The Altitude32 offers an unprecedented level of flexibility and upgradability, making it the most sophisticated processor currently available.
The Altitude32 already has the Dolby Atmos upgrade, the Auro3D one will be coming soon, so for the purposes of the demonstration the Dolby Atmos configuration was used. The demo was being held at Ideaworks, whose custom built £250,000 home cinema uses a 7.4.4 configuration for Dolby Atmos, that's seven surround channels, four subwoofers and four overhead speakers. The home theatre uses a JBL synthesis speaker and amplification package with a room within a room construction for effective soundproofing. Ideaworks actually built the Dolby Atmos cinema at Dolby's Soho offices where were recently had a demo and the cinema in the Bulgari Hotel where Sony held an AVForums event a couple of years ago.

The demonstration used the Dolby Atmos Demo Blu-ray that was first released at CEDIA back in September and this disc includes all the Dolby Atmos trailers, as well as various film clips including Star Trek Into Darkness and Oblivion. Currently the only commercially available Dolby Atmos Blu-ray is Transformers: Age of Extinction but more are coming, including The Expendables III. For the demo we watched the 'Unfold' and 'Thunderstorm' trailers, as well as a scene from Oblivion.

The sound was absolutely stunning, almost as good as the demo we had in the Dolby's own Atmos cinema, with a perfectly realised three dimensional sound field. The placement of objects and the panning of sounds was very distinct, whilst the tonal balance was quite exceptional. The room simply disappeared and you were transported to the audio environment of whatever was appearing on screen. The overhead sounds of rainfall during the 'Thunderstorm' trailer were clearly delineated and the four subwoofers delivered the enveloping thunder with frightening impact. The Oblivion clip showed what was possible with a well designed Atmos soundtrack and the audio completely immersed you in the overall experience.

The Trinnov Audio Altitude32 certainly lives up to its billing but, as we said, this kind of performance doesn't come cheap. The basic 8-channel configuration with a black chassis will set you back £14,950. There's also a 16-channel version (which is the minimum you'll need to take advantage of Dolby Atmos and Auro3D) which costs £17,950, a 24-channel version which costs £21,950 and the full 32-channel version which will set you back a whopping £24,950. That's before you add any extras such as the 3D codecs option (Dolby Atmos and Auro3D) which will cost £1,950, the silver finish which is an extra £650 and the Trinnov 3D Measurement Probe which is an additional £550.

What that basically means, is that for the full package you'll have to shell out a total of £28,100, which makes it significantly more expensive than even Datasat's RS20i. Obviously the Altitude32 will be primarily used in custom installations, where else would you be able to fit 32 channels of amplification and the necessary speakers, but clearly if you're looking for uncompromising performance, total flexibility and a genuine upgrade path, then the Trinnov Audio Altitude32 will be music to your ears.
To comment on what you've read here, click the Discussion tab and post a reply.
Article Specs Discussion (28)

Datasat launch the LS10 with Auro-3D

Samsung Blu-ray players not working for many owners