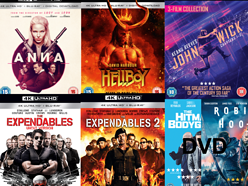 In this third instalment of the adrenaline-fuelled action franchise, super-assassin John Wick (Keanu Reeves) returns with a $14 million price tag on his head and an army of bounty-hunting killers on his trail. After killing a member of the shadowy international assassin's guild, the High Table, John Wick is excommunicado, but the world's most ruthless hit men and women await his every turn.

Sylvester Stallone stars as Barney Ross, leader of The Expendables, a tight-knit team of skilled combat vets turned mercenaries. Hired by a powerful covert operator, the team jets off to a small South American country to overthrow a ruthless dictator. Once there, they find themselves caught in a deadly web of deceit and betrayal. Using every weapon at their disposal, they set out to save the innocent and punish the guilty in this blistering action-packed thriller.

The Expendables are back in a sequel that J. Rentilly of MensHealth.com calls "a high-octane" adventure with non-stop action!" The team signs on for a mission that looks like an easy paycheck for Barney and his band of old-school mercenaries. But things quickly go wrong, and one of their own is killed by a psychotic terrorist-for-hire. Hell-bent on payback, they cut a swath of destruction through enemy territory and wreak havoc upon their opponents. In the midst of the mayhem, they must also shut down an unexpected threat in the nick of time - preventing five tons of weapons-grade plutonium from falling into the wrong hands.

An assassin caught between the KGB and the CIA plays the two against each other in an attempt to reclaim her life in ANNA; a sophisticated and satisfying action-thriller written and directed by Luc Besson. Anna (Sasha Luss) is discovered by a modeling scout while selling tchotchkes at a craft market and is whisked off to Paris where she becomes an instant sensation in the fashion world. But behind her exquisite exterior, Anna has a deadly secret - she is a KGB-trained assassin. Startling plot twists, breath-taking action and unexpected double crosses propel a smart, stylish espionage thriller set in the glittering world of high fashion.

Hellboy is back, and he’s on fire. From the pages of Mike Mignola’s seminal work, this action-packed story sees the legendary half-demon superhero (David Harbour, “Stranger Things”) called to the English countryside to battle a trio of rampaging giants. There he discovers The Blood Queen, Nimue (Milla Jovovich, Resident Evil series), a resurrected ancient sorceress thirsting to avenge a past betrayal. Suddenly caught in a clash between the supernatural and the human, Hellboy is now hell-bent on stopping Nimue without triggering the end of the world. Mike Mignola’s cult comic book series Hellboy, filled with horrifying vision of monsters and mayhem, is brought to life by director Neil Marshall (The Descent, TV’s “Game of Thrones”).

What better way to blow away the cobwebs and kick-start the festive spirit over the holidays than with some serious high calibre, high octane 4K action, headlined by one of the best action trilogies of all time - the Deluxe John Wick Trilogy.

This competition is open to all eligible AVForums members who are in the Well-known Member User Group and who are subscribed to our newsletter. 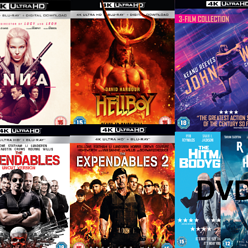