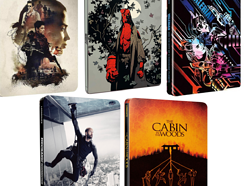 With Christmas fast approaching, Lionsgate are offering up a stunning Steelbook Blu-ray™ package including Sicario, Cabin in the Woods, Hellboy, Valerian and the City of a Thousand Planets, and Mechanic: Resurrection, all on Limited Edition Steelbook Blu-ray™.

In Mexico, SICARIO means hitman. In the lawless border area stretching between the U.S. and Mexico, an idealistic FBI agent [Emily Blunt] is enlisted by an elite government task force official [Josh Brolin] to aid in the escalating war against drugs. Led by an enigmatic consultant with a questionable past [Benicio Del Toro], the team sets out on a clandestine journey forcing Kate to question everything that she believes in order to survive.

The Cabin in the Woods

Writer/director team Joss Whedon and Drew Goddard join forces once again for this teen horror flick. When five college friends arrive at a remote cabin in the woods for a weekend of partying, they soon discover that things are not quite as they seem. As a series of terrifying events unfolds, the friends realise that they have become the pawns in someone's very sick idea of a game.

Hellboy is back, and he’s on fire. From the pages of Mike Mignola’s seminal work, this action-packed story sees the legendary half-demon superhero (David Harbour, “Stranger Things”) called to the English countryside to battle a trio of rampaging giants. There he discovers The Blood Queen, Nimue (Milla Jovovich, Resident Evil series), a resurrected ancient sorceress thirsting to avenge a past betrayal. Suddenly caught in a clash between the supernatural and the human, Hellboy is now hell-bent on stopping Nimue without triggering the end of the world.

Valerian and the City of a Thousand Planets

In the 28th century, Valerian (DeHaan) and Laureline (Delevingne) are a team of special operatives charged with maintaining order throughout the human territories. Under assignment from the Minister of Defense, the two embark on a mission to the astonishing city of Alpha—an ever-expanding metropolis where species from all over the universe have converged over centuries to share knowledge, intelligence, and cultures with each other. There is a mystery at the center of Alpha, a dark force which threatens the peaceful existence of the City of a Thousand Planets, and Valerian and Laureline must race to identify the marauding menace and safeguard not just Alpha, but the future of the universe.

Arthur Bishop (Statham) returns as the Mechanic in the sequel to the 2011 action-thriller. When the deceitful actions of a cunning but beautiful woman (Alba) force him to return to the life he left behind, Bishop's life is once again in danger as he has to complete an impossible list of assassinations of the most dangerous men in the world.

For those Steelbook fans out there, what better bundle of joy could you hope for over Christmas than this trifecta of impressive offerings.

Watch the trailer for Sicario here:

This competition is open to all eligible AVForums members who are in the Well-known Member User Group and who are subscribed to our newsletter. 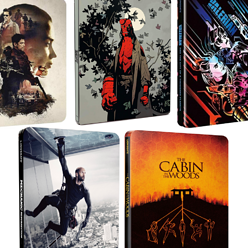