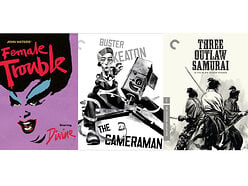 Win a copy of Criterion's July Titles on Blu-ray

Win a copy of Criterion's July Titles on Blu-ray
Competition Discussion
This competition has now ended. The winners will be announced here shortly.
The Criterion Collection and Sony Pictures Home Entertainment are delighted to add three new titles in July 2020 and we are giving YOU a chance to win a copy of ALL of them on Blu-ray™.

Glamour has never been more grotesque than in Female Trouble, which injects the Hollywood melodrama with anarchic decadence. DIVINE, the larger-than-life muse of director JOHN WATERS (Multiple Maniacs), engulfs the screen with charisma as Dawn Davenport—who progresses from a teenage nightmare hell-bent on getting cha-cha heels for Christmas to a fame monster whose egomaniacal impulses land her in the electric chair—in the ultimate expression of the film’s lurid mantra, “Crime is beauty.” Shot in Baltimore on 16 mm, with a cast drawn from Waters’ beloved troupe of regulars, the Dreamlanders (including MINK STOLE, DAVID LOCHARY, MARY VIVIAN PEARCE, EDITH MASSEY, and COOKIE MUELLER), this film, the director’s favourite of his work with Divine, comes to life through the tinsel-toned vision of production designer VINCENT PERANIO and costume designer/makeup artist VAN SMITH. An endlessly quotable fan favourite, Female Trouble offers up perverse pleasures that never fail to satisfy.

BUSTER KEATON (The General) is at the peak of his slapstick powers in The Cameraman—the first film that the silent-screen legend made after signing with MGM, and his last great masterpiece. The final work over which he maintained creative control, this clever farce is the culmination of an extraordinary, decadelong run that produced some of the most innovative and enduring comedies of all time. Keaton plays a hapless newsreel cameraman desperate to impress both his new employer and his winsome office crush as he zigzags up and down Manhattan hustling for a scoop. Along the way, he goes for a swim (and winds up soaked), becomes embroiled in a Chinatown Tong War, and teams up with a memorable monkey sidekick (the famous Josephine). The marvellously inventive film-within-a-film setup allows Keaton’s imagination to run wild, yielding both sly insights into the travails of moviemaking and an emotional payoff of disarming poignancy.

This first film by the legendary HIDEO GOSHA (Sword of the Beast) is among the most canonized chambara (sword-fighting) films. An origin-story offshoot of a Japanese television series phenomenon of the same name, Three Outlaw Samurai is a classic in its own right. In it, a wandering, seen-it-all ronin (TETSURO TAMBA) becomes entangled in the dangerous business of two other samurai (ISAMU NAGATO and MIKIJIRO HIRA), hired to execute a band of peasants who have kidnapped the daughter of a corrupt magistrate. With remarkable storytelling economy and thrilling action scenes, this is an expertly mounted tale of revenge and loyalty.