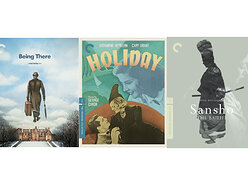 Win copies of Criterion's January Titles on Blu-ray
Competition Discussion
Sorry, but you are not eligible to enter this competition. You do not have the necessary permission to enter competitions.
The winner will be announced here after the closing date on Tuesday February 11, 2020.
The Criterion Collection and Sony Pictures Home Entertainment are delighted to add three new titles in January 2020 and we are giving YOU a chance to win a copy of each of them on Blu-ray™.

In one of his most finely tuned performances, PETER SELLERS (The Pink Panther) plays the pure-hearted Chance, a gardener forced out of moneyed seclusion and into the urban wilds of Washington, D.C., after the death of his employer. Shocked to discover that the real world doesn’t respond to the click of a remote, Chance stumbles haplessly into celebrity after being taken under the wing of a tycoon (Oscar winner MELVYN DOUGLAS), who mistakes his new protégé’s mumbling about horticulture for sagacious pronouncements on life and politics, and whose wife (The Apartment’s SHIRLEY MACLAINE) targets Chance as the object of her desire. Adapted from a novel by JERZY KOSINSKI, this hilarious, deeply melancholy satire marks the culmination a remarkable string of films by HAL ASHBY (Harold and Maude) in the 1970s, and serves as a carefully modulated examination of the ideals, anxieties, and media-fuelled delusions that shaped American culture during that decade.

Two years before stars KATHARINE HEPBURN (The African Queen) and CARY GRANT (North by Northwest) and director GEORGE CUKOR (My Fair Lady) would collaborate on The Philadelphia Story, they brought their timeless talents to this delectable slice of 1930s romantic-comedy perfection, the second film adaptation of a hit 1928 play by PHILIP BARRY. Grant is at his charismatic best as the acrobatically inclined free spirit who, following a whirlwind engagement, literally tumbles into the lives of his fiancée’s aristocratic family—setting up a clash of values with her staid father while firing the rebellious imagination of her brash, black-sheep sister (Hepburn). With a sparkling surface and an undercurrent of melancholy, Holiday is an enchanting ode to nonconformists and pie-in-the-sky dreamers everywhere, as well as a thoughtful reflection on what it truly means to live well.

When an idealistic governor disobeys the reigning feudal lord, he is cast into exile, his wife and children left to fend for themselves and eventually separated by vicious slave traders. Under the dazzling direction of KENJI MIZOGUCHI (Ugetsu), this classic Japanese story became one of cinema’s greatest masterpieces, a monumental, empathetic expression of human resilience in the face of evil.

Watch this Criterion promo for Being There here:

This competition is open to all eligible AVForums members who are in the Active Member User Group or above, and who are subscribed to our newsletter. 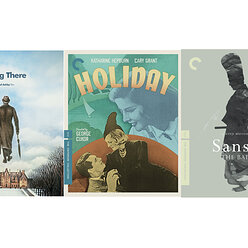