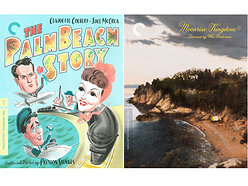 Win copies of two of Criterion's November Titles on Blu-ray

Win copies of two of Criterion's November Titles on Blu-ray
Competition Discussion
This competition has now ended. The lucky winners of this competition are displayed below.
The Criterion Collection and Sony Pictures Home Entertainment are delighted to add these new titles in November 2019 we are giving YOU a chance to win a copy of both The Palm Beach Story and Moonrise Kingdom on Blu-ray™.

This wild tale of wacky wedlock from PRESTON STURGES (The Lady Eve) takes off like a rocket and never lets up. JOEL MCCREA (Sullivan’s Travels) and CLAUDETTE COLBERT (It Happened One Night) play Tom and Gerry, a married New York couple on the skids, financially and romantically. With Tom hot on her trail, Gerry takes off for Florida on a mission to solve the pair’s money troubles, which she accomplishes in a highly unorthodox manner. A mix of the witty and the utterly absurd, The Palm Beach Story is a high watermark of Sturges’s brand of physical comedy and verbal repartee, featuring sparkling performances from its leads as well as hilarious supporting turns from RUDY VALLEE and MARY ASTOR as a brother and a sister ensnared in Tom and Gerry’s high jinks.

An island off the New England coast, summer of 1965. Two twelve-year-olds, Sam and Suzy, fall in love, make a secret pact, and run away together into the wilderness. As local authorities try to hunt them down, a violent storm is brewing offshore . . . WES ANDERSON’s Moonrise Kingdom stars Jared Gilman and Kara Hayward as the young couple on the run, BRUCE WILLIS as Island Police Captain Sharp, EDWARD NORTON as Khaki Scout troop leader Scout Master Ward, and BILL MURRAY and FRANCES McDORMAND as Suzy’s attorney parents, Walt and Laura Bishop. The cast also includes TILDA SWINTON, JASON SCHWARTZMAN, and BOB BALABAN. The magical soundtrack features the music of Benjamin Britten.

Also available from Criterion in November are the Godzilla Showa-Era Films (NOT part of this competition). 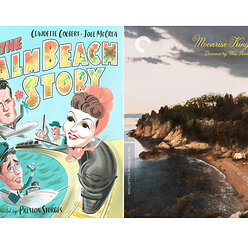