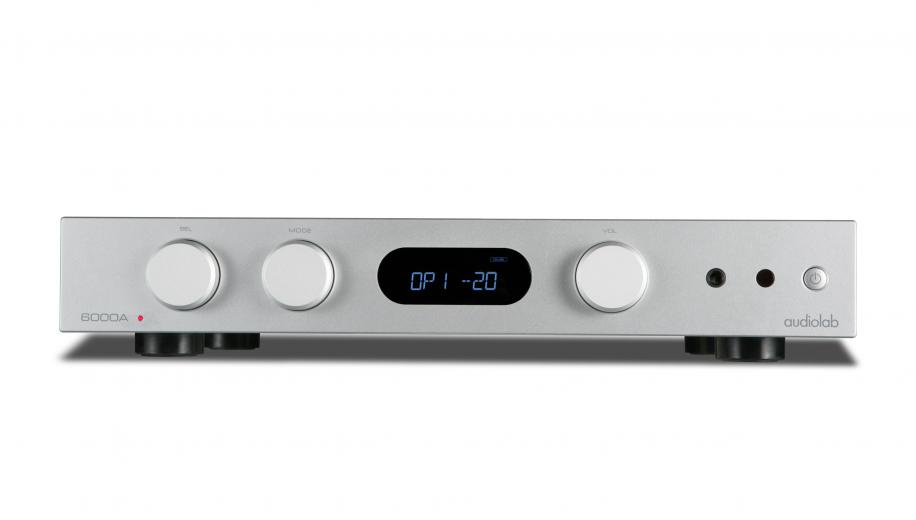 Audiolab 6000A Stereo Amplifier (2018)
SRP: £599.00
Outwardly, the 6000A bears a strong resemblance to the 8300A – Audiolab’s existing, integrated amplifier – with its rotary controls and large, central OLED display. Unlike the 8300A, the 6000A incorporates D/A conversion, enabling digital sources to be connected directly without an external DAC. The amp offers three ‘distinct operational modes’, which Audiolab claims helps it to adapt to its user’s evolving requirements. The primary mode is ‘Integrated’ – this combines the pre and power amp stages, for the connection of digital and analogue sources to the amp’s inputs and a pair of speakers to its binding posts.

‘Pre-Power Mode’ disconnects the pre and power amp stages. The allows the 6000A to be used solely as a power amp – for example, connected to an AV processor in a home cinema system. It also enables additional signal processing to be added, by connecting the 6000A’s ‘preamp out’ socket to an external processor, then returning the processor’s output to the amp’s ‘power amp in’ socket. Finally, ‘Pre Mode’ disables the power amp stage, turning the 6000A into a standalone preamp. This enables external power amplification to be added, thus providing a possible upgrade path. Audiolab asserts that the new amp offers great value for money. Jan Ertner, the project’s lead electronics designer, stated: “......I’m proud of the results we have attained. On DAC performance alone, the 6000A will match standalone DACs in the £500-£600 range.”

The amp will be available from October in a choice of silver or black, at an RRP of £599.