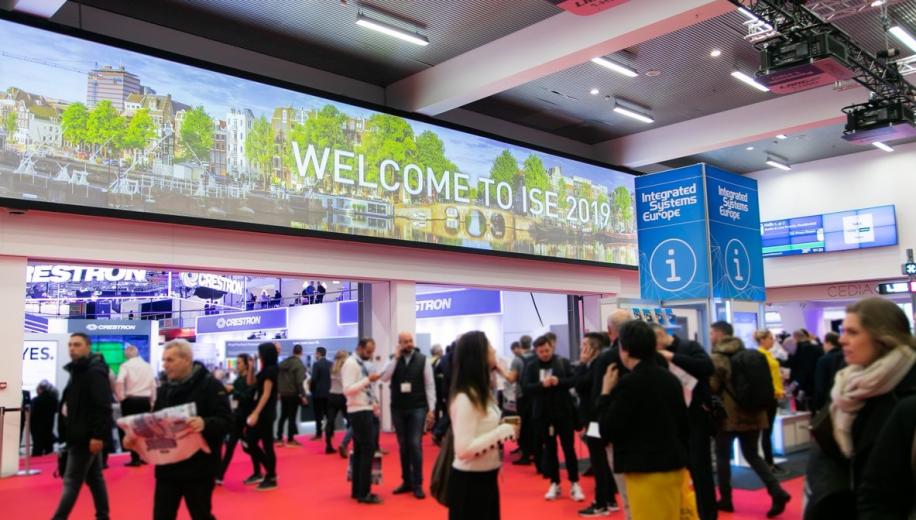 ISE 2019’s penultimate Amsterdam based event comes to a close before the whole shebang moves to Barcelona in 2021. It was the largest ISE to date with nearly 1300 exhibitors. So what were some of the standouts?
Generally speaking, the ISE show doesn’t usually attract the kind of consumer AV equipment that normally finds its way into enthusiasts’ homes in the way that CES, IFA or the Bristol Hi-Fi show does. Instead, the focus is on developments in digital signage, building management and security, education and business AV, lighting and audio design for theatre and the arts, and high-end custom installations.

However, look carefully amongst these professional displays and there are some exhibits to be found that that would be of interest to a typical AV enthusiast. Initially announced at CES last month and proving that 8K isn’t just the domain of high-end TVs, the TXF-3500 is the company’s first 8K projector and it is believed to be based around JVC’s D-ILA platform. It will cast a 35 million pixel image at a resolution of 8,192 x 4,320 from a variety of SD, HD and UHD/4K sources.

Wolf Cinema’s Director of Sales, Jim McGall, said that when viewed close up, the image “looks more like 35 or 70mm film….. and what’s best of all, our TXF-3500 Ultra 8K ensemble is eminently affordable, priced within the reach of many video enthusiasts.”

No word on just much that ‘affordability’ will be. Short throw projectors are finding a market for themselves in facilitating a large screen experience in restricted installation spaces. The UHZ65UST, based on the UHZ65 projector released in 2018, is specifically designed for home cinema enthusiasts, features ground-breaking laser technology, supports HDR and achieves a 4K resolution through XPR (eXpanded Pixel Resolution) pixel shifting technology.

Alexa voice control is supported in the US, UK and Germany and there’s also a built-in Optoma NuForce audio bar. Just plonk it down a few inches from your screen or a suitable wall and off you go with a 120” display. Introduced at CES 2018 as a 146 inch display to show off their new Micro LED technology, Samsung bought 'The Wall' back to CES 2019 in a 219-inch version. Keen to keep the Micro LED ball rolling, the Korean company used ISE 2019 to announce that it will launch a 292-inch version of the modular, self-emissive display by the end of Q2 this year. Clearly, this kind of titanic size is aimed at professional installations but smaller consumer oriented versions of the technology will also become available.

Samsung was also in receipt of a ‘Best of Show Installation Award’ for their 8K QLED digital signage which uses the same technology as that found in their Q900R TV. Sony has used ISE 2019 to launch two new laser projectors, the VPL-FHZ75 and VPL-FHZ70, to cater for the increased demand for large image, high brightness projection in education, corporate and public applications.

Both projectors use a newly-developed 0.76-inch LCD panel with incorporated optical compensator to deliver images with ‘infinite’ contrast. They offer WUXGA (1920 x 1200) resolution, with a colour light output of 6500lm (VPL-FHZ75) and 5500lm (VPL-FHZ70) and both utilise Sony’s ‘Reality Creation’ image processing.

In keeping with the public space installation intent, there’s a choice of four pre-set modes including classrooms, museums, entertainment venues and multi-screen.

“The demand for reliable and versatile laser projectors has grown significantly in recent years,” explained Robert Meakin, European Product Manager at Sony Professional Solutions Europe. “At Sony, we work very closely with our partners and customers to create solutions together that meet their needs, no matter what sector they operate in.”

The new models will be available May 2019. Drawing visitors in with their Vortex display (16 double-stacked laser projectors and a custom 4D multi-channel audio soundtrack), Epson revealed the EB-L1075U, EB-L1070U and EB-L1050U, a new range of 4K 3LCD laser installation projectors which support interchangeable lenses and produce bright images up to 7,000 lumens. Designed for large venue usage from visitor attractions to lecture theatres, museums to meeting rooms, the projector itself is available as a body only, giving the user an option of 12 interchangeable Epson lenses, from short to long throw projection.

The range will be available in September. Winning a ‘Best of Show AV Technology' award, the NEC P525UL low noise projector was designed for ‘near-silent’ operation, in meeting rooms but could also make a difference to home cinema setups too.

Features include [email protected] input processing, 5000 lumens brightness and up to 20,000 hours of maintenance-free operation thanks to the laser light source. Furthermore, the optical laser LCD engine is completely sealed, meaning there is no need to change bulbs or filters over the projector’s lifetime, ensuring reliable colour brightness. Another 'Best of Show Installation' award winner, the FHDQ130 is a full HD 1080p LED display at 130 inches (2.88 x 1.62m). Designed to be easily installed, it is pre-calibrated out of the box to remove the hassle of managing software and the various associated files, whilst ensuring the image is optimised for use straight away.

The FHDQ130 supports a wide viewing angle of 170 degrees, allowing for image retention across a range of viewing locations - important for viewing in public spaces - and supports a range of connectivity and control options including dual HDMI, USB, RS232 and HDBaseT. In addition, users can take advantage of Optoma’s Connect Q application to control the display from smart phone or tablet. New to the award-winning Rotel 14 series, the A11 Stereo Integrated Amplifier and CD11 CD Player were announced at ISE and sit at the more affordable end of the market. Build upon Rotel’s 50+ years of designing and manufacturing Hi-Fi components, they provide plenty of inputs to guarantee support for all popular audio sources.

The A11 amplifier includes an integrated Bluetooth receiver offering support for both aptX and AAC for CD quality, wireless audio streaming. For vinyl lovers, the A11 includes a Moving Magnet Phono Stage input and delivers 50 Watts per channel of Class AB output power.

The A11 and CD11 are available in both silver and black finishes. The range is optimsed for use with the new Sonos Amp which is released in the UK on the 12th Feb 2019 and is already available in the US.
The Sonos In-Wall and Sonos In-Ceiling speakers are $599/pair, while the Sonos Outdoor by Sonance is $799/pair. Taking a step (or three) up from the Sonos Outdoor speaker is the Bose Professional ArenaMatch DeltaQ array loudspeaker which moves outdoor audio from the BBQ patio to a muddy field at Glastonbury. These modules each sport a 14-inch neodymium woofer and six Bose EMB2S titanium-diaphragm neodymium compression drivers and use DeltaQ array technology to allow direction, or “Q,” to vary in each module to more precisely match coverage to audience area.

Perfect for when you’re next strumming away in your back garden!