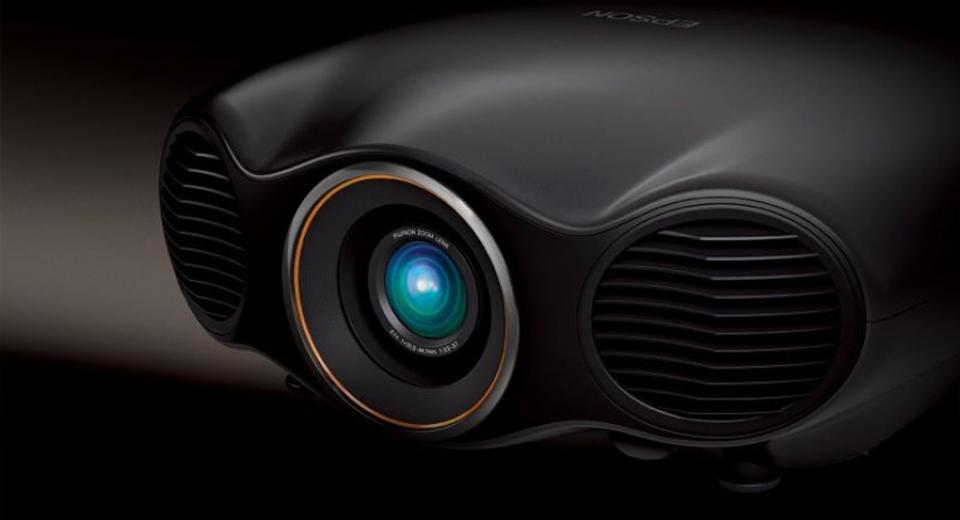 Epson EH-LS10000 Projector (2015)
SRP: £5,999.00
The major problem with bulb-based projectors is that whilst they can be very bright, they also dim quickly and have short effective lifespans.
The Holy Grail of video projection is a light source that is bright, has a long life and is consistent over that life. At first using LEDs looked like a possibility but they proved difficult to keep accurate and struggled to deliver enough brightness. Then we had LED/Laser hybrids, which could deliver bright images, consistency and long life but struggled when it came to colour accuracy. The ideal solution is to use a laser or lasers to create the light because they're bright, consistent and respond really quickly to changes in contrast. That dream may have come significantly closer with the news from CEDIA 2014 that Epson are to release two laser projectors in the US - the LS10000 and the LS9600e.

These new projectors use two blue lasers, one of which creates the blue light, whilst the other is bounced off a yellow phosphor, which is composed of red and green, thus creating those two colours as well. This approach has a number of key benefits. Firstly you can switch laser projectors on and off instantly, no waiting for the UHP bulbs to warm up or cool down. Secondly it offers both consistency and long life, up to 30,000 hours according to Epson. Thirdly lasers can respond to changes in contrast very quickly, thus improving the dynamic range of the projector. In terms of brightness, the LS10000 and LS9600e are rated at 1,500 and 1,300 ANSI lumens respectively, which whilst not super-bright at least puts them in the same category as bulb-based projectors from JVC and Sony. If that wasn't enough, the LS10000 and LS9600e also use a reflective version of LCD which Epson are calling Liquid Crystal on Quartz (LCoQ). This is essentially the same as JVC's LCoS (Liquid Crystal on Silicone) and thus promises much better black levels than standard LCD projectors. We actually saw an Epson prototype using this technology four years ago and the black levels were very impressive but at the time it was too expensive to produce. It looks as though Epson have overcome their production problems and the combination of LCoQ and lasers promises a superior contrast performance. In fact Epson say the combination of LCoQ and laser light will deliver "unprecedented black levels", with zero lumens output during full-black scenes.

Finally, in terms of the LS10000, we also get what Epson are referring to as "4K Enhancement Technology", which sounds a lot like JVC's e-Shift technology currently found on their X500, X700 and X900 models. Epson are a bit thin on technical details but they use the same 0.5 pixel diagonal shift to double the horizontal and vertical resolution that JVC do on their e-Shift projectors. This results in a projected resolution of 3840 x 2160 and Epson also apply image processing including edge, texture and detail enhancement. Like the JVC projectors, the 4K Enhancement Technology only applies to 2D images an is not used with 3D, which is still projected at a resolution of 1920 x 1080.
The Epson LS10000 sounds a lot like a JVC projector with its use of LCoQ and 4K Enhancement but with the addition of a laser source.
In terms of other features the LS10000 has a wider colour gamut, with DCI and Adobe RGB modes, ISF calibration tools and THX certification. The LS10000 also includes a 2.1x motorised zoom, a motorised focus and extensive lens shift (90% vertical and 40% horizontal). There are also 10 memory settings, including zoom, shift and focus settings for different aspect ratio screens and two HDMI inputs, one of which supports HDCP 2.2. The LS9600e includes many of the same features but adds a wireless HDMI transmitter that allows up to five sources to connected remotely.

Needless to say, we're very keen to get one of these new babies in for review but unfortunately we might have to wait. According to Epson UK, the company has identified the US as the best market to launch these new models and will make a decision on whether to roll them out to other territories based upon their performance Stateside. However we'll certainly keep you posted on any further developments, as well as any firm pricing.