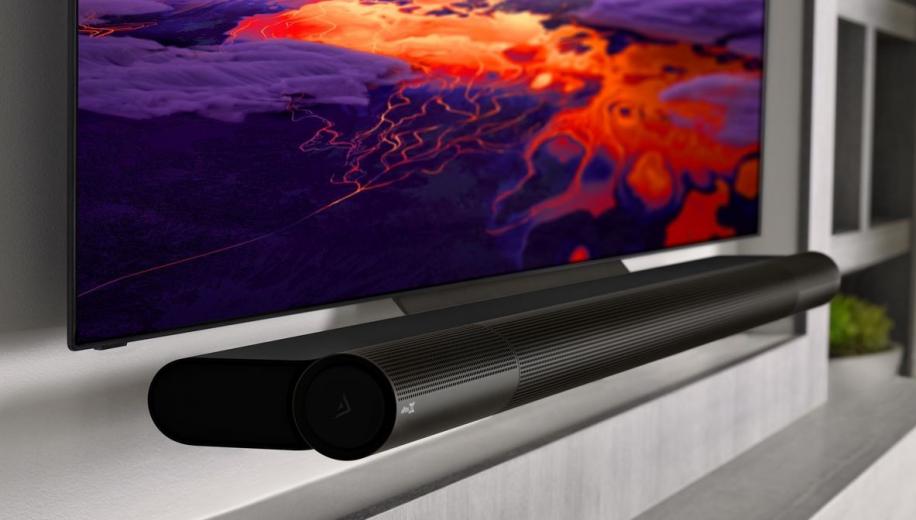 Vizio has unveiled a full array of soundbars at CES 2020 including the 18 driver Elevate, plus M- and V-Series soundbars variously featuring support for Dolby Atmos, DTS:X and DTS Virtual:X audio formats, HDMI 2.1, Bluetooth 5.0 and backlit remotes.

As the number one soundbar supplier in the US, Vizio is almost duty bound to come up with something pretty eye (ear?) catching at CES 2020 to maintain its position at the top of the US TV sound table.

And it may well have done that with its flagship offering, the 5.1.4 channel Elevate soundbar which sports a P-Series model number to match up to the nomenclature of Vizio’s top end Quantum TVs. The headline feature here is the two outermost speakers that can switch orientation between upward-firing height speakers and forward-firing stereo boosting speakers. The rotation into position is automatically triggered by the detection of Dolby Atmos or DTS:X audio and this automatic signal detection is something that all of the company’s 2020 soundbars feature.
Vizio are keen for consumers to see the Elevate as a perfect match for its newly announced OLED TV and beyond the rotating drivers, the Elevate soundbar has a total of 18 drivers when the included 8-inch wireless subwoofer and wireless surround speakers with their own upfiring drivers are taken into account. The subwoofer has a reported frequency response down to 30Hz and the total output from the complete Elevate system is 107dB.

The included HDMI 2.1 ports bring with them eARC support enabling lossless audio, including object-based audio formats such as Dolby Atmos and DTS:X to be passed from an eARC compatible TV and its TV apps.

The other newly announced soundbars are named to match up to the M- and V-Series TVs and also reflect the same entry and mid level price brackets and have been designed with lower profiles to make them easier to arrange in your listening space.

M-Series soundbars
There’s a range of choices in the mid range M-Series from the All-in-One soundbar, which eschews any satellite speakers for dual subwoofers built into its wave-shaped body and DTS Virtual:X to simulate surround effects, to 5.1 and 5.1.2 multi-channel soundbar solutions.
The M-Series 5.1 and 5.1.2 models are capable of supporting Dolby Atmos and DTS:X with their wireless surround speakers and subwoofers which are capable of reaching 45Hz, and both offer separate tweeters, mid-bass drivers and passive radiators for the front three channels. The 5.1.2 version adds upwards firing speakers in the bar for overhead sounds.
V-Series soundbars
The entry level V-Series models come in 2.1 and 5.1 channel versions both featuring wireless subwoofers with the 5.1 adding a centre channel for dialogue and wireless satellite surrounds. Support of uncompressed audio is dropped in these models (and also the M-Series All-in-One) since eARC is not featured, although HDMI-ARC is present.

The V-Series soundbars, like all the mid and premium models, can connect to compatible sound sources via Bluetooth 5.0 and digital voice assistants can be used by connecting to an Amazon Echo Dot or a Google Nest Mini. Once connected to a smart speaker Vizio’s new soundbars will automatically lower their volume when you’re speaking to your digital assistant, and then raise the volume again once you’re done interacting.
With this new generation of soundbars, Vizio has also enhanced menu navigation, redesigned remotes to add backlit controls in premium models, and introduced multicolour input indicators to make the systems even easier to use.

Bill Baxter, Chief Technology Officer, Vizio, said, "VIZIO isn't resting on its industry leadership in audio; instead we're making bold steps forward to continue to elevate the industry and improve the listening experience across the board. Today, we're announcing the most competitive and immersive sound bar series we've ever launched." he further added, "Not only do our soundbars bring a design and finish that stands out from the rest of the market, but we're providing new levels of audio performance and ease-of-use to every price point.”

Is Vizio pushing innovation in the right direction with its rotating speakers in the flagship ELevate soundbar? Let us know in the discussion thread what you think of this new set of soundbars.