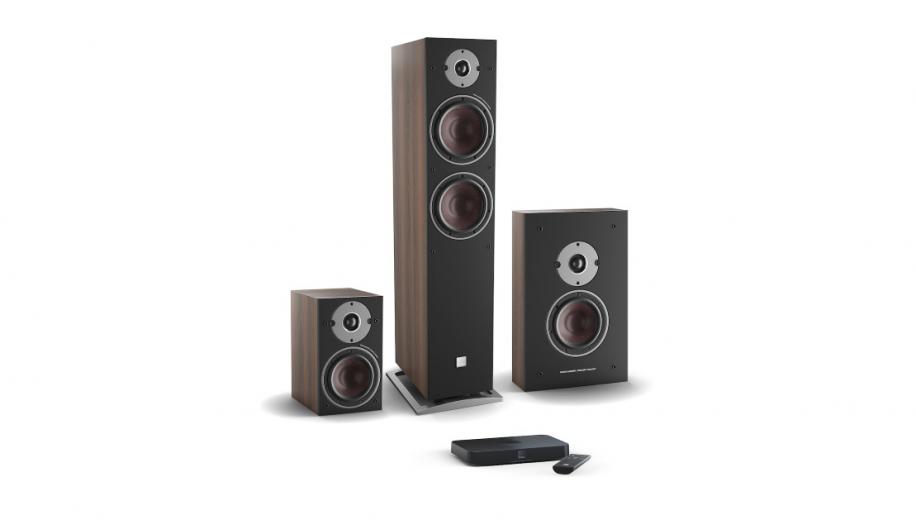 Danish purveyors of high end speakers DALI (the name stands for Danish Audiophile Loudspeaker Industries, so the clue’s there) launched the original OBERON series of speakers in 2018 and marketed them as entry level audiophile speakers, with the implemented SMC disk technology greatly reducing mechanical distortion. Now, the release of the OBERON C series sees the same SMC technology matched with added wireless convenience alongside the high end audio quality.

There are three different active two-way speaker options covering the choices for floorstanding (the OBERON 7 C), bookshelf (OBERON 1 C) or wall mounting (OBERON ON-WALL C). Each is compatible with the new Sound Hub Compact wireless audio preamplifier or existing DALI Sound Hub (the streaming brains behind the CALLISTO and RUBICON speakers) though they can be used in a conventional wired configuration.

However, it’s the wireless setup that DALI feels will impress with its ‘Power Pair Play’ mantra emphasising the ease and convenience of getting things up and running. Essentially, owners are simply invited to turn on the system and let it get on with the set up procedure as there’s no separate control app involved.

The Sound Hub Compact has been designed to act as a central hub for TV integration with HDMI ARC as well as other wired digital and analogue sources. It can also pair with Bluetooth enabled devices and features AAC and aptX HD high performance codecs. The stable wireless connection between the Hub and the OBERON C speakers means that the Sound Hub Compact can be located as much as 10m apart from the speakers without risk of connection failure or signal interruptions. Audio transmission latency from input to speaker is quoted as ‘typically less than 15ms’ with inter-speaker timing down to a single sample period of broadcast audio data.

The speakers are easy to position since the driver materials, crossover design and geometry applied all contribute to a wide dispersion pattern, which ensures a well-integrated sound, even when listening at a significant off-axis.

The OBERON C amplification comprises two 50 Watt peak, closed-loop Class-D power amplifiers. One amplifier powers the high frequency driver while the other powers the bass/mid driver (or twin drivers in the case of the OBERON 7 C).

OBERON C speakers are available in Black Ash, Dark Walnut, Light Oak, and White to fit in with most home decors and the systems are now available for shipping as follows:

Any of the OBERON C speakers systems can be upgraded to work with the DALI SOUND HUB and BLUOS Module for an additional £250.