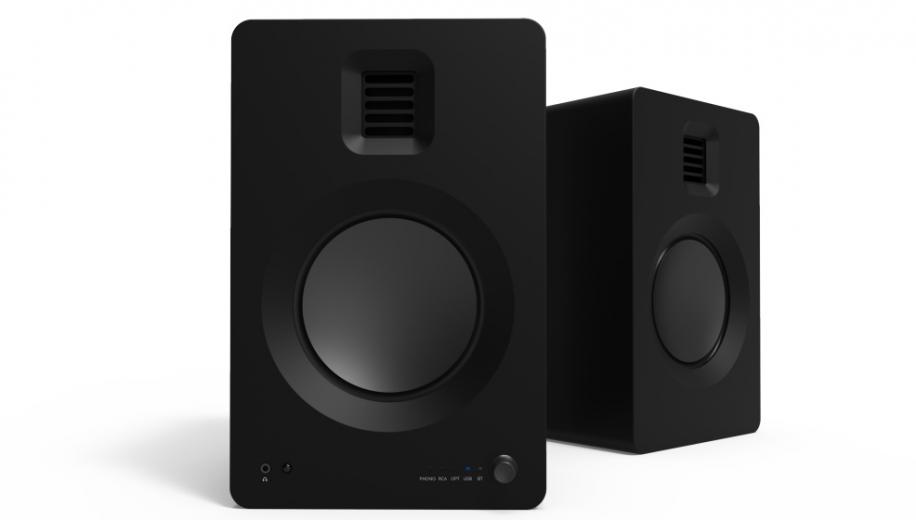 Canadian speaker specialists Kanto may only be just over a decade old but they have a number of powered bookshelf speakers and subwoofers available. Their newest addition is the premium TUK.

Possibly a new name to UK audio fans, Kanto is releasing its high performance flagship bookshelf TUK which features an Air Motion Transport tweeter, Bluetooth and a host of connection options for £750.

This wireless, powered stereo speaker system is Kanto’s most advanced yet and is designed to be space saving and versatile without compromising on quality.

Built on a power base of 130W RMS delivered by class D amplification, each channel receives 65W.
The tweeter in each speaker uses an Air Motion Transformer (AMT) design which means it is extremely lightweight and can react faster than standard dome tweeters, the result is a quick, accurate high range. In addition, the pleated nature of the tweeter improves efficiency by increasing surface area, allowing for more air to be moved than by a comparatively sized dome tweeter. The rectangular shape maintains a relatively wide horizontal audio dispersion yet limits vertical dispersion so that less audio is reflected off the ceiling and floor. Thus, all the listeners in the room hear a consistent frequency response.

The 5.25-inch aluminium cone driver, in each cabinet, is incredibly rigid, making them less prone to deformation when pushed to their limit. By preventing the driver from flexing, the amount of distortion the driver introduces to the audio is reduced, resulting in a clear sound at any volume.
The speakers have been tuned using digital signal processing (DSP) which enables Kanto to implement an active crossover network into its speakers for the first time and with, the option to add a Kanto subwoofer, the active crossover further improves low-end resolution by filtering out frequencies below 80Hz when one is connected, which improves resolution and reduces distortion.

The TUK employs Bluetooth 4.2 with the aptX, AAC and aptX HD codecs meaning that if your device supports aptX HD, then it’s possible to stream better than CD quality Hi-Res audio to the speakers.

The front panel presents a row of LEDs to indicate which of the inputs is currently being used, These inputs include dedicated phono and line-level RCAs and an optical TOSLINK port, plus there’s a phono pre-amp, headphone amp and USB DAC all built-in too. Both the optical input and USB port support files up to 24-bit / 96kHz and the USB input provides enough power for an Amazon Echo or Google Home Mini
The TUK can be used in a wealth of scenarios from streaming audio to improving the sound on your TV to listening to vinyl or experiencing a more immersive gaming session.

There is a host of useful features such as reversible channels, custom EQs, advanced signal detection, night mode and more, and the included remote control allows control of a number of these functions.

If you’re wondering how the monicker ‘TUK’ was arrived at, well, according to Kanto, it’s named after the hamlet of Tuktoyaktuk in the North Western Territories of Canada, a sub-arctic area of natural beauty where the aurora borealis can be regularly seen.

The TUK comes in a white or black finish and is available for preorder now from www.gear4music.com for £750 per pair.