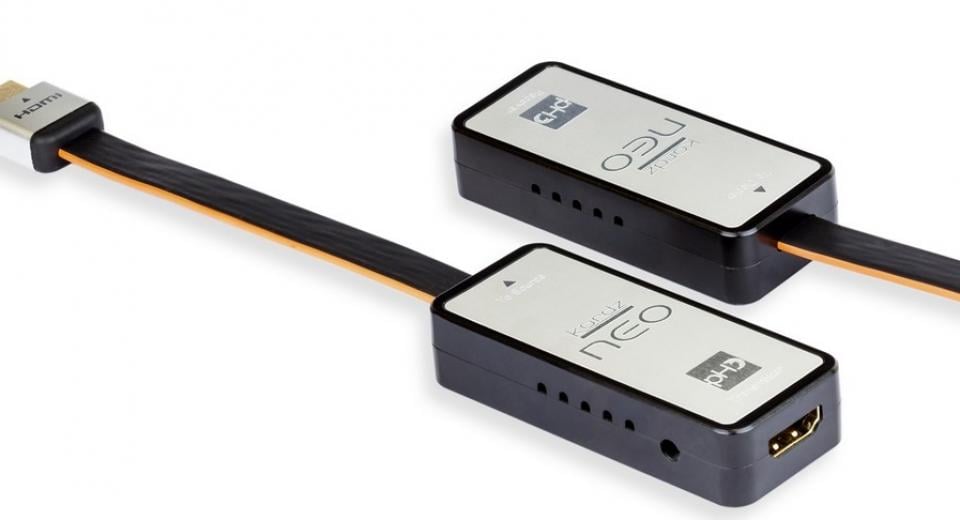 Kordz NEO-S3 Series 3 HDMI Upgrade Kit Home Distribution Product (2013)
If you’ve put lots of time and effort in to chasing those HDMI cables in to your wall, the thought of replacing them to keep up with the times is unlikely to appeal.

Well, this might be your answer as HD Connectivity have announced a partnership with Kordz to distribute their products in the UK. This means that the NEO-S3, is now readily available to the public (and trade) without the need or hassle of importing.

The great benefit of NEO-S3 is that it will turn your existing HDMI cable in to one capable of carrying 4K Ultra HD signals and, for all new installs, can carry the data up to 30 metres on thinner, more flexible, easier to pull cable.

The system is comprised of two compact dongles - a transmit and a receive unit - NEO simply connects to both ends of an existing long length passive HDMI cable, actively upgrading it to High Speed 4K UltraHD compatible. What, they tell us, makes it unique and ‘immensely powerful’ is the fact that it’s double-ended, encapsulating the long HDMI cable, isolating it both electrically and mechanically from the devices. That means that NEO can control every aspect of the HDMI signaling from tip to tip, including DC power, low speed and high speed.
"demystify the new frontiers of HDMI 2.0 and 4K.”
“In Kordz we have a highly specialised partner that shares an affinity for good design and engineering, reinforced with education and real integrity”, says Chris Pinder, Managing Director of HD Connectivity. “Kordz founder David Meyer is regarded as CEDIA’s most authoritative voice in CI-centric HDMI education. And together we want to help demystify the new frontiers of HDMI 2.0 and 4K.”

The NEO-S3 system is priced at £269.99 and available at www.hdconnectivity.com