From rollable to foldable 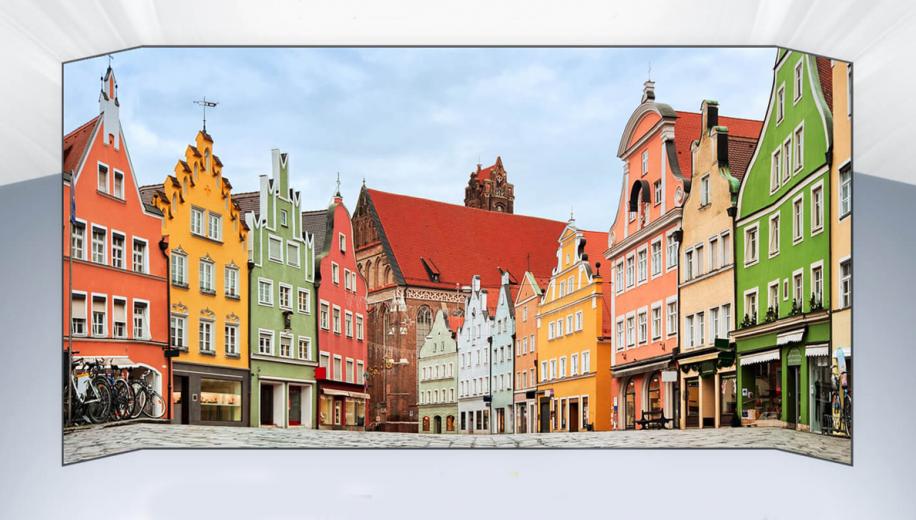 Just over a year ago, LG showed off their OLED R rollable TVs, now a patent for a folding TV looks to have been granted. Could this mean a first showing at CES 2020?

According to LetsGoDigital, the patent was awarded on September 13th 2019 after being initially submitted to The Hague International Design System in March of this year. The patent description is recorded as follows, “This design is for a television receiver with flexible display which can be folded at regular intervals. The square frames on both sides serve as stands, as well as sound bars.”
The accompanying images show a rectangular screen in six equal segments with two side panels that would appear to house the speakers and much of the other required hardware. These appear to provide support during use and protection when the display is folded away using the zigzagged old-school map-style folding lines.

When unfolded, the diagrams indicate a screen whose far left and right panels are angled forward to provide a curved effect and the large aspect ratio of at least 21:9 combined with these ‘side’ screens could lead to an interesting immersive experience when watching movies.


As with most companies that explore technological innovations, not all patents lead to a marketable product but an interesting aspect of this patent is that it has been under the umbrella of LG Electronics rather than the more R&D oriented LG Display affiliate. Could this mean that a product is closer than expected, possibly for showcasing at CES 2020?

There’s no indication whether this patent applies to just OLED displays, as in the case of LG’s OLED R rollable display - which notably still hasn’t hit the TV market - or LCD TV screens too.

If it did become available as a fully fledged TV product, it would be interesting to see how it would be marketed. Superficially, it appears to be a method of keeping a viewing space free of a large black screen in much the same way as the rollable OLED but most TVs are used for hours at a time every single day, so folding and unfolding it everyday seems very user unfriendly. Also, many TV fans are proud of their carefully researched purchase and want to show it off, plus it doesn’t really help those that want to wall mount their TV either.

Perhaps the more obvious selling point is the potential portability of a folding TV (depending upon its weight), maybe to move it around the home or transport it to friends.

As a side note, LG might want to wait and see how the public react to the raft of upcoming folding smart phones after Samsung’s false start with the Galaxy Fold before they commit to a folding TV.

All that notwithstanding, it’s nice to know that LG is forging ahead with some blue sky development work and along with their longstanding rival Samsung, who recently applied for trademarks for a range of descriptions including Dual LED, Infinity Screen and Zero Bezel, it could transpire that there are some interesting prototype TVs on show at CES in Jan 2020.

Let us know what you think of the idea of a folding TV in the discussion thread.