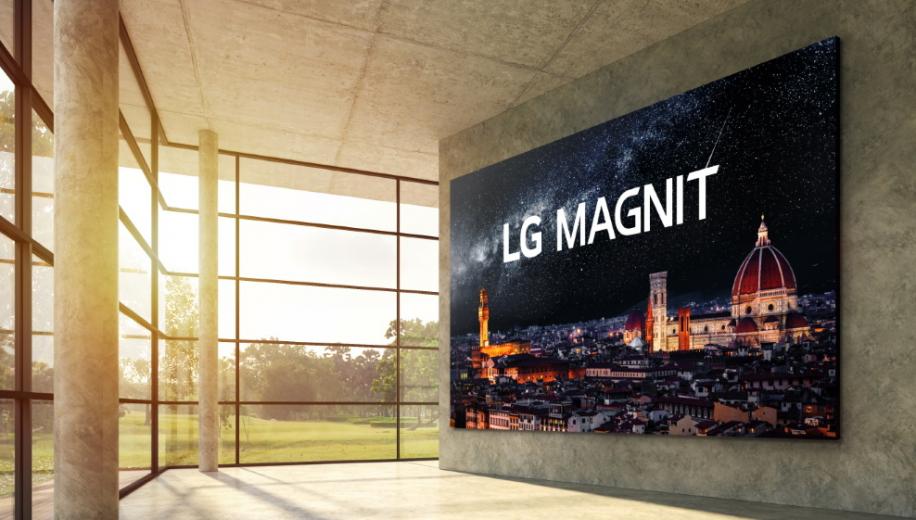 Launched globally this week in major markets in Asia, North America and Europe, according to the company the name Magnit comes from combining the words “magnificent” and “nit,” the measurement unit for luminance.

Originally unveiled in a ‘sneak peek’ at InfoComm in 2019, Magnit’s Micro LED technology involves self-emissive micrometer-scale pixels applied directly to the substrate board to deliver images with improved contrast and a wide viewing angle. LG also applies its new Black Coating technology which has a number of benefits including further improving contrast and colour reproduction, reducing glare, reflections and also making it easier to remove fingerprints and smudges. Finally, it also protects the minute LED pixels from moisture, dust and external impact.

With a pixel pitch of 0.9mm and peak brightness of 600 nits (1200 nit peak), the Magnit uses the Alpha 7 Intelligent Processor, which has been adapted from LG’s TV ranges, to recognise, analyse and optimise content using deep learning AI technology, thus improving the image quality.

In addition, the Magnit includes support for HDR10 and HDR10 Pro which is LG’s own solution to process HDR signals by using enhanced dynamic tone mapping.

The individual panels that make up the various sized display options measure 600 x 337.5 x 44.9mm (WxHxD) and slot together so technicians can quickly erect large-scale displays on site. This block-assembly design allows power to be sent to each cabinet via pin connectors located on the edges of the LED cabinet hub.

The largely wire-free assembly - there’s only a few cables on the back of the displays to link the cabinets to system controllers and power mains - is further exemplified by Wireless Data Transfer and LG’s webOS smart signage platform for intuitive navigation and control of features and presets.

Initially aimed as a signage solution for public spaces, convention centres, corporate and hotel lobbies, luxury boutiques, broadcast studios, control rooms, exhibition halls and museums, the Magnit will also function as a luxury home cinema installation at 163-inches with a 4K resolution. There’s also a Frame Kit available to ensure a smooth edge to the display.

Clearly taking on fellow South Korean electronics giant Samsung at its own game, LG’s Magnit will go head to head with Samsung’s The Wall Micro LED display, although at this stage of the game, Samsung’s version of the technology appears nearer to finding its way into consumer environments with a 75-inch version being shown at CES in January with a launch being mentioned for later in the year.

Leave a comment in the discussion thread to let us know your thoughts on LG’s latest display announcement.