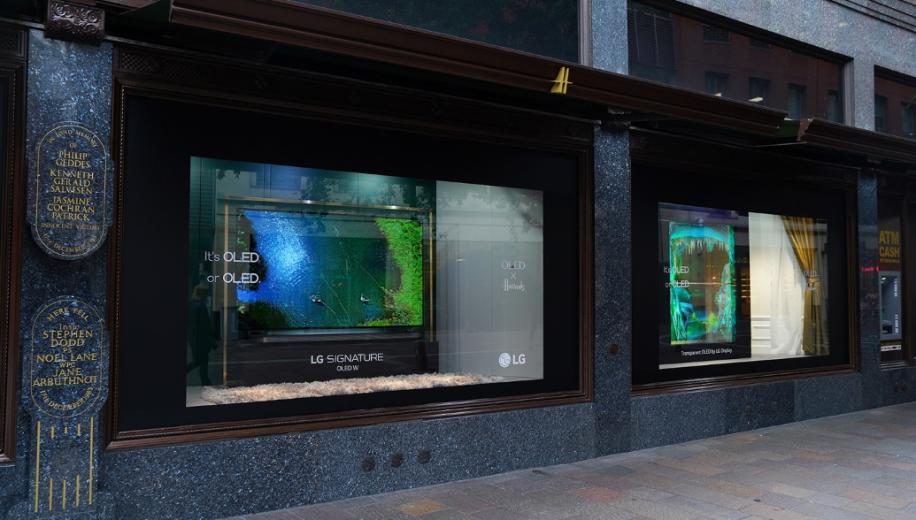 October 7th to 28th is Harrods’ Tech Month and the famous retailer has partnered with LG Display for a second time in order to demonstrate the South Korean company’s latest OLED developments in its Hans Crescent store windows.

On exhibit will be LG Display’s 55-inch FHD transparent OLED display which features in a doubled up, vertically stacked display featuring a transparency of 38 percent. According to the press release, the content being shown for the public passers-by will be ‘exciting and interactive’.

LG Display is the only manufacturer of large-size transparent OLED displays in the world and has been pursuing OLED as the best display technology to realise transparent screens as it requires no backlight since the OLED’s pixels can produce their own light. This means there are no extra layers behind the screen obscuring vision through the display.

Of particular interest to retailers, transparent displays enable information about a product to be shown while the transparent nature of the screen allows the product to be on display behind it, in the background. Their attention-grabbing premium allure is also a useful tool in getting consumers to engage with products.

KJ Kim, Vice President and Head of Global OLED Promotion at LG Display stated, “LG Display will provide more chances for the public to experience the innovation of OLED by collaborating once again with world-renowned department store Harrods which showed its willingness to embrace OLED as an unmatched next-generation technology.” He added, “As the pioneer of OLED displays, LG Display is committed to leading the future of OLED, thereby enhancing people’s lives with this cutting-edge technology.”

Harrods and LG Display previously collaborated over the summer bringing prominence to the latest OLED TVs from brands including LG Electronics, Bang & Olufsen, Panasonic and Philips, all of which use OLED TV panels made by LG Display. Indeed, Panasonic’s own version of a transparent OLED display, on demo at last month’s IFA expo, would have been built around LG Display’s OLED panels.

This ongoing collaboration between the world’s most famous store and the world’s largest producer of OLED panels is seen as a perfect fit between the premium nature of OLED TVs and the luxury heritage of Harrods.

LG Display is also taking its market awareness drive to the continent with OLED Zones set up in five major electronics distribution brands, including Media Markt and Saturn, to enable European consumers to see what OLED TVs might bring to their home entertainment setups.

If you’re passing Harrods during their Tech Month why not let us know what you thought of the transparent OLED display and any other products you saw.