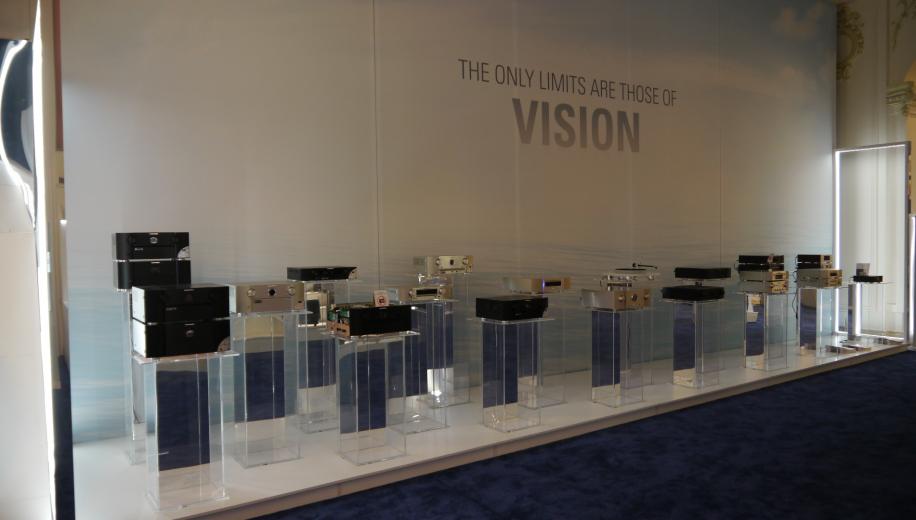 Marantz are now part of Sound United, so along with stablemate Denon they are joined by US speaker manufacturers Polk and Definitive Technology.
As a result of the recent buy-out there will undoubtedly be opportunities to pair some of Marantz’s highly musical AV Receivers and renowned HiFi products with some impressive high-end speakers. In the meantime Marantz have been busy consolidating their AV Receiver line-up by adding new features like HEOS, Hybrid Log-Gamma (HLG) and Dolby Vision across the range and even including Auro-3D free of charge in their higher end SR7012. In terms of their AV Receivers, Marantz have made something of a niche for themselves with their slimline models that offer all the benefits of a full-sized AVR but with a less intimidating appearance. Their 2017 slimline models look to retain that key selling point but expand the range of features. So this year we have the 5-channel NR1508 which will be available in June for £499 and the 7-channel NR1608 which will also be available in June at a price of £599, with both models being available in black or silver. Along with its slimline chassis the NR1608 includes a 7.1-channel platform with 90W of built-in amplification per a channel. New this year is support for the HEOS multiroom system, along with a retuned sound and 32-bit AKM DAC. There’s also support for Dolby Atmos (5.1.2), DTS:X, AirPlay, Spotify Connect and up to DSD5.6 streaming. There’s WiFi and Bluetooth built-in and 8 HDMI inputs and an output which along with 4K 60p, High Dynamic Range (HDR 10), Wide Colour Gamut and HDCP 2.2 will also support Hybrid Log-Gamma (HLG) and Dolby Vision thanks to a firmware update in the autumn. Finally the NR1608 supports Audyssey MultEQ along with the Audyssey App, making it a very impressive AV Receiver when you consider its less imposing dimensions. Of course if you’d rather have a full size AV Receiver then there’s the SR6012 which includes 9 channels of built-in amplification with 185W per a channel. Marantz have retuned the receiver around a new 32-bit DAC and it includes a current feedback preamp, 11.2-channels of processing and 13.2 preouts. New this year is the addition of HEOS support but the SR6012 also supports Dolby Atmos (7.2.4) and DTS:X, as well as Spotify Connect, Deezer, Tidal and Hi-Res Audio. The SR6012 has 8 HDMI inputs and 3 HDMI outputs, all of which support 4K 60p, High Dynamic Range (HDR 10), Wide Colour Gamut and HDCP 2.2. In the autumn Marantz will also add support for HLG, Dolby Vision and eARC via a firmware update. The addition of enhanced ARC (Audio Return Channel) will allow Dolby TrueHD and DTS-HD Master Audio to be passed back via ARC over HDMI. Finally the SR6012 will support Audyssey MultEQ XT32 with Sub EQ, Audyssey LFC and the Audyssey App. The receiver will be available from August in black or silver at a cost of £1,099. Marantz plan to launch a new 11-channel flagship AV Receiver late this year or in early 2018 but until then the top AVR is the SR7012 which includes 9 channels of discrete amplification at 200W per a channel. The SR7012 has all the features found on the SR6012 but adds Auro-3D built-in and bass synchronisation technology. The SR7012 will be available in October in a choice of black or silver and will retail for a suggested price of £1,499. Marantz will also be launching the new AV7704 Multi-Channel AV Pre Amp in October at a suggested price of £1,899. This Pre Amp will offer high quality 11.2-channel processing with XLR and RCA outputs. It will also include a retuned sound, new parts and a current feedback HDAM Preamp, along with 13.2 pre outs, 7.1-channel inputs and a phono input. There will be support for HEOS, Dolby Atmos, DTS:X and Auro-3D, along with DSD and Hi-Res audio. The AV7704 has 8 HDMI inputs and 3 HDMI outputs, all of which support 4K 60p, High Dynamic Range (HDR 10), Wide Colour Gamut and HDCP 2.2. Marantz will also add support for HLG, Dolby Vision and eARC via a firmware update. Finally the AV7704 includes bass synchronisation technology and Audyssey MultEQ XT32 with Sub EQ, Audyssey LFC and the Audyssey App.

That's certainly an impressive range of receivers with features and price points to suit most needs and if they can retain their usual flair and musicality, Marantz will have another strong line-up for 2017.
To comment on what you've read here, click the Discussion tab and post a reply.
News Discussion (49)