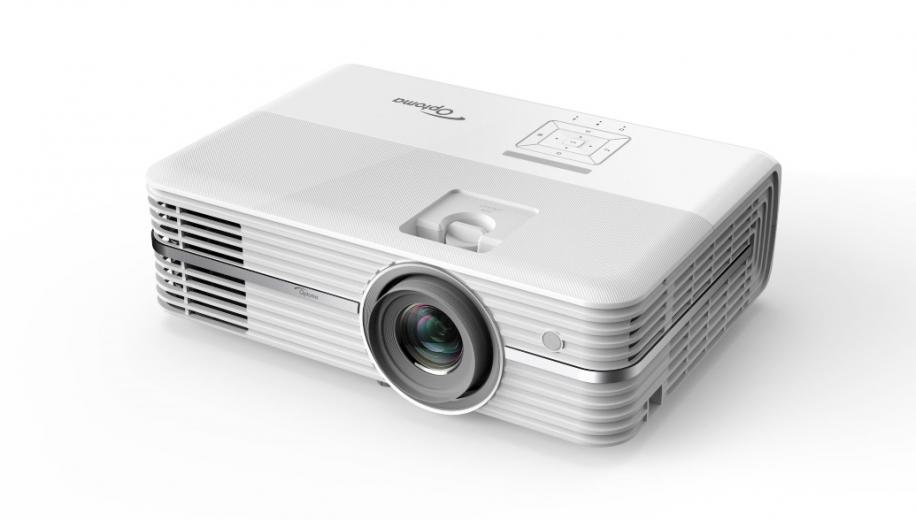 Optoma wants their newest home projector to sit proudly in your living room rather than be hidden away in a darkened home cinema set up. As such, the UHD52ALV features a bright 3,500 ANSI lumens meaning you can watch movies and TV or play games in your family room without needing to plunge it into near total darkness. And with the inbuilt stereo speakers, the projector provides everything that’s needed to start the cinematic experience.

As a 4K unit, over eight million pixels bring four times more detail to the image than Full HD resolution and HDR10 and HLG HDR formats are supported to bring out more depth in both the shadow areas and highlights.
Replacing the UHD51ALVe, the UHD52ALV is equipped with Optoma’s Amazing Colour technology which uses an enhanced colour wheel combined with special modes and settings tuned by Optoma’s technicians to provide colour performance that includes accurate Rec.709 HDTV broadcast spec colours.

Serving as the family’s entertainment hub, the UHD52ALV works with Alexa and Google Assistant as long as you have a compatible Amazon Echo or Google Home smart speaker hooked into your home Wi-Fi system. Simple voice commands enable the projector to be powered on and off, switch inputs, pause playback and control volume.

The built-in media player allows movies to be watched directly from the projector without the need for a laptop, simply by plugging in a USB stick containing your favourite film files. The UHD52ALV is compatible with 3D formats too and can playback material from almost any 3D source including 3D Blu-ray players, 3D broadcasting and the current generation games consoles.
Given installation in a main family room may have certain limitations, the vertical lens shift function makes it easier to position the projector in your room by enabling a wider range of screen size options.

Connections include 2 HDMI 2.0 inputs with HDCP 2.2 support and the TapCast app enable wireless sharing of content from iOS, Android, MacOs and Chrome based devices. The app also acts as a wireless mouse and keyboard allowing you to control your projector.

Further control is available via the use of If This Then That which is a web based service allowing simple strings of commands to be combined to provide automation with smart IoT devices and there’s also easy access to popular streaming services through the Optoma Marketplace.
Kishan Mistry, Senior Product Manager at Optoma EMEA, said: “Building on the success of the UHD51ALVe, the new UHD52ALV projector offers the ultimate convenience. Exceptional brightness for lights on viewing, 4K crystal clear detail, HDR and HLG compatibility and built-in smart home features make this a truly compelling entertainment solution.”

Listings on the ProjectorCentral.com website show shipping in October and an MSRP of $3,399 with a much lower street price of $1,799. No UK price has yet been announced.

Are there any AVForums or site visitors that have been looking for a large screen entertainment solution for the whole family that doesn’t involve designing and building a home cinema space? How does the UHD52ALV sound as a possibility? Let us know in the discussion thread.