Q-symphony brings TV and soundbar together 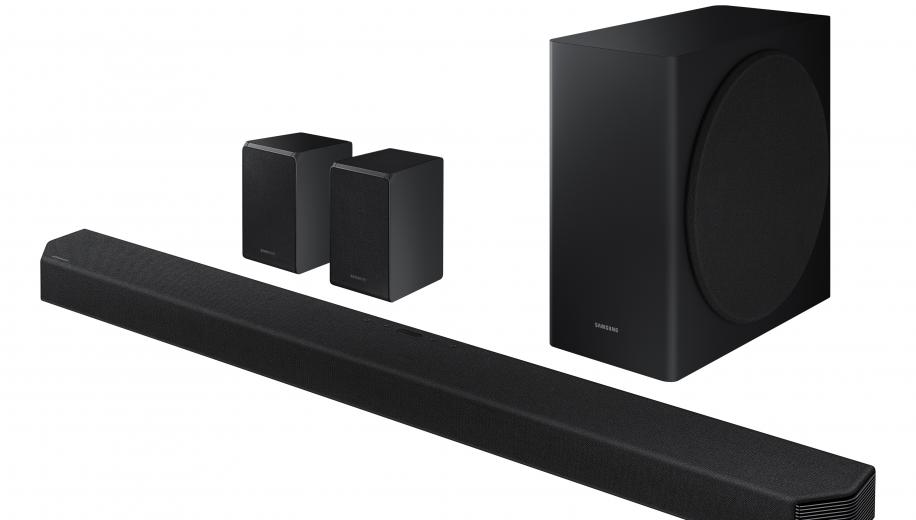 Picking up a CES 2020 Innovation Award honouree nod, the HW-Q950T and HW-Q900T have been launched to complete Samsung’s 2020 Q-Series line-up of premium soundbars.

The company’s flagship HW-Q950T is a 9.1.4 soundbar and represents the highest number of audio channels currently available in a single soundbar while the smaller of the two devices, the HW-Q900T, maintains a premium label and fires its audio through a slightly reduced 7.1.2 channels. Both support Dolby Atmos and DTS:X object-based 3D surround sound formats for maximum aural immersion.

They join the existing midrange Q-Series soundbars for 2020, the Q800T (which AVForums recently reviewed), the Q70T and the Q60T.

Like last year’s successful HW-Q90R, which it replaces at the top end, the HW-Q950T has two wireless rear surrounds that feature up-firing speakers but also adds additional left and right wide channel speakers within the bar to increase the width of the sound field.

The HW-Q900T loses the two rear speakers (and therefore the rear up-firing function) so relies on the two up-firing speakers in the main soundbar for its height channels. However, both new soundbars come with a wireless subwoofer to bolster the low end and also support Dolby TrueHD which they can pass losslessly via eARC.

One of the most significant elements of the Q-Series soundbars is their ability to synchronise with Samsung’s own 2020 QLED TVs using proprietary Q-Symphony technology to reproduce audio from both the TV and the soundbar for a fuller sonic experience.

Both soundbars have reduced their overall height from last year’s 83mm to 69.5mm to enable them to fit perfectly with the company’s QLED TVs, and they are now wrapped in stylish Kvadrat textile, which allows maximum sound penetration.

The two new models work with the SmartThings app and voice control is available via Alexa voice assistant, so music can be selected from a listener’s favorite music streaming services such as Amazon Music, Spotify, TuneIn, and iHeart Radio.

Transferring music from your phone to the Q950T and Q900T is achieved with a simple tap using the Tap Sound feature and, as with all the company’s soundbars, they have been tuned at the Samsung Audio Lab in Valencia, California.

Release dates and prices have not confirmed for the UK but Australia already has the soundbars available and conversion of the prices indicates the HW-Q900T will be somewhere around £900 while the HW950T will be in the region of £1,149 - £1,199.

The AVForums podcast is moving to Wednesdays