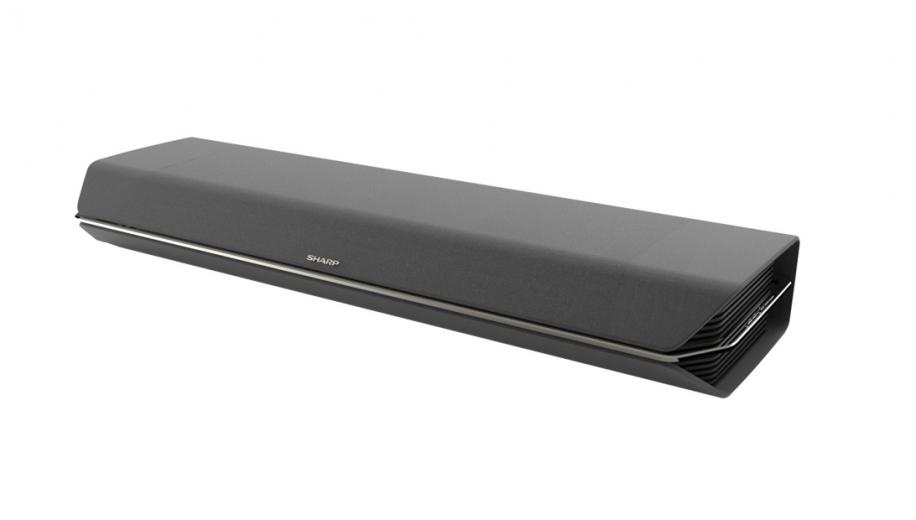 Sharp has announced a pair of soundbars aimed at different markets. One could give extra life to an old TV that just won't give up the ghost, while the other could elevate your TV’s audio performance to new heights.
Not everyone has the latest smart TV or wants to upgrade to one just at the moment but for those who feel they might be missing out on the latest TV shows only available via a streaming device, Sharp’s new 2.1 HT-SBW310 Smart Soundbar can add the smart functionality needed to give your faithful old TV a new lease of life. Meanwhile, the 5.1.2 Soundbar HT-SBW800 offers a room-filling immersive audio experience courtesy of Dolby Atmos support.


IFA 2019 Berlin, 05 September 2019 – Sharp, one of the world's leading electronics groups, is presenting a range of innovative audio products at the International Funkausstellung (IFA) in Berlin. Sharp is rounding off its broad range with two new soundbars. At the IFA premiere of Sharp’s Smart Soundbar and a 5.1.2 Dolby Atmos® system, the company will also provide insights into new products and technologies for 2020.

Smart soundbar designed by Pininfarina
The 2.1 Premium Soundbar HT-SBW310 makes every TV smart and upgrades sound at the same time. Sharp is the first manufacturer to present an innovative smart soundbar, which creates new possibilities in terms of connectivity and an all-round audio experience. Customers with non-smart TVs, displays, projectors, monitors, or any devices with outdated smart features, will benefit from a wide range of content and convenient voice control, with access to Alexa and some of the best world-wide, and local, streaming services. The built-in DVB-T2 tuner also enables connection to terrestrial television.

Equipped with two Class D amplifiers, two 2.5-inch drivers and a tweeter, the soundbar delivers voluminous sound at the highest level. An external subwoofer with 60 or 100 watts can also be added for some extra bass power. The HT-SBW310 Smart Soundbar reproduces audio content in 4K HDR video quality and also supports Dolby Digital™.

Sharp is supported by the Italian design legend Pininfarina, known for its design of luxury vehicles. The rounded corners, complete metal frame and striking side elements give the soundbar an extraordinary appearance.

Puts you in the middle of the action
The 5.1.2 Soundbar HT-SBW800 with wireless subwoofer provides a thrilling sound experience. The integrated Dolby Atmos® technology guarantees a 3D experience that lets the users immerse themselves into the world of sound. Loudspeakers are integrated on the side and top of the speaker allowing the whole room to fill with sound. Other sound formats such as Dolby THD™, Dolby Digital™ and Dolby Digital Plus™ are also supported. Two HDMI 2.0 inputs and an output with 3D/4K pass-through are available as connections for external devices. Furthermore, the soundbar has an optical input, a coaxial input and an AUX input, with wireless streaming via Bluetooth® also possible.

At IFA 2019, Sharp will be presenting further soundbar solutions and giving insights into the upcoming line-up. Asides from the HT-SBW800, a 5.1.2 soundbar with Dolby Atmos®, DTS® Play-Fi® is planned to be released in 2020.

With the DTS-Play Fi® wireless audio system, the sound bar can be seamlessly integrated into a multi-room audio system, or be the centrepiece of a wireless surround sound system. DTS Play-Fi sends audio content, whether music or TV audio, to compatible DTS Play-Fi speakers throughout the house in perfect sync. Using the DTS Play-Fi app for iOS and Android, users can access streaming services such as Spotify, Amazon Music, Tidal, Qobuz, Napster and Deezer. Internet radio stations and podcasts are also available. AirPlay2 and Works with Alexa compatibility provide additional ways for users to stream to their soundbar, including direct voice control from Siri or Alexa.

The 5.1.2 Soundbar HT-SBW800 with Dolby Atmos is now available for a recommended retail price of £549.