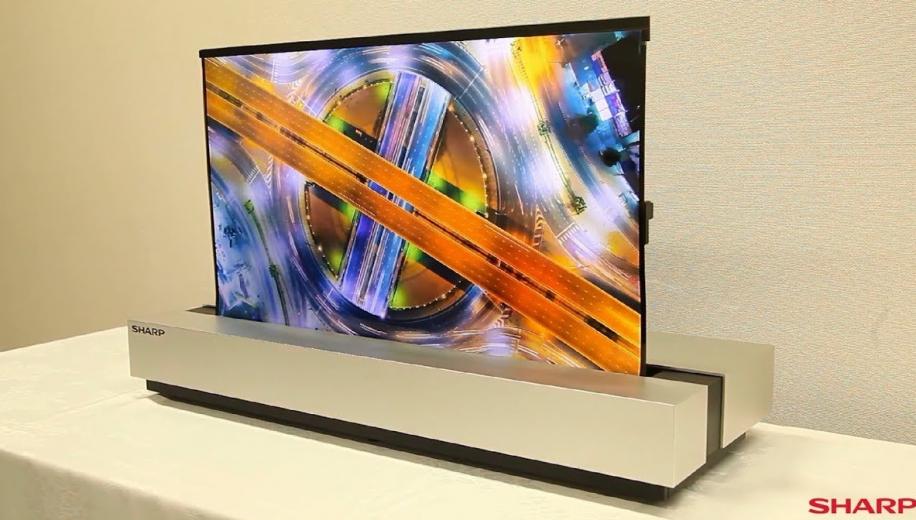 With the LG Signature Series OLED R rollable TV still not out in the consumer market yet, Sharp has revealed it has been developing its own version in partnership with broadcaster NHK.

The Japanese firms recently unveiled their rival to LG’s CES 2019 debutant and will be demonstrating it at the Inter BEE 2019 international broadcaster show.

At only 30-inches in size, though still sporting a 4K resolution and 60Hz refresh rate, the Sharp rollable OLED might perhaps be a touch overshadowed by the 65-inch model LG had on show at CES 2019 in terms of pure dimensions but the OLED technology behind the screen offers advantages in other areas. The model on show is being described as a ‘prototype’ and ‘in development’.
The production process eschews the standard approach taken by LG Display in their manufacturing approach whereby the panel is made up of pixels that use four subpixels to produce the colours white, red, green and blue - hence LG Display’s WRGB OLED panels. Instead, Sharp has used a vapour deposition technique that creates an RGB pixel structure that produces red, green and blue directly, which according to Sharp, creates more vibrant colours since no colour filter is required. The screen itself is just 0.5mm thick and forms a tube with a diameter of 4cm when rolled up.
This RGB manufacturing approach allows Sharp to describe the screen as ‘the world’s largest colour filterless 4K display’ since LG’s process involves projecting the pixel’s self-emissive light through a filter to create the requisite colours.

There’s no word on when (or if) this concept will make it to the market and it could be that Sharp is waiting to see how consumers take to LG’s R9 rollable OLED, which is expected to be very expensive and will be seen as a premium product
With its smaller screen and compact case, Sharp could be aiming for the more affordable end of the TV market, perhaps with an eye on those whose living arrangements simply do not have the space for a 65-inch screen, such as those residents of flats and apartments.