Sony and Microsoft team-up for cloud gaming and AI projects

The enemy of my enemy is my friend? 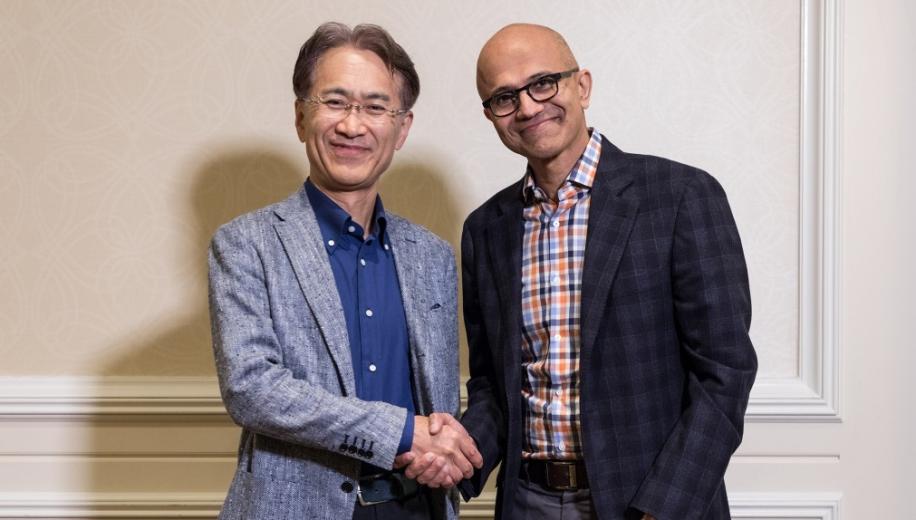 Fierce rivals, in the gaming world at least, Microsoft and Sony have announced a surprise partnership geared towards cloud solution development, and semiconductor and AI exploration.
A post on Microsoft’s news blog showed the Sony and Microsoft CEOs, Kenichiro Yoshida and Satya Nadella respectively, shaking hands and smiling. The accompanying release promised that the two companies “will partner on new innovations to enhance customer experiences in their direct-to-consumer entertainment platforms and AI solutions.”

What does this mean? Well, the expectation is that Sony will now have access to Microsoft’s Azure cloud service which could allow the Japanese electronics giant greater opportunities when it comes to streaming services.

Sony does already have a well established games streaming service in the form of PS Now, which allows access to PlayStation back catalogue titles. According to IHS Markit analyst, Piers Harding-Rolls, this accounts for a 36% share of the $387m global games streaming market - the largest slice - but industry experts suggest that, given the expected rapid expansion of the streaming market, Sony’s relative lack of expertise and infrastructure could see them struggle to go it alone in the face of competition from the likes of Apple with their recently announced Arcade games platform and Google’s upcoming Stadia project, another streaming based gaming service.

So, even as Microsoft is preparing to use its own servers to power its Project xCloud gaming service, it is perhaps this competition that has galvanised them into allowing Sony access to its Azure cloud service in an effort to prevent Amazon from stepping in and offering its own, significant, Amazon Web Services computing power.

"It is clear that Microsoft is the best choice for Sony even with the competitive dynamic between Xbox and PlayStation,” Mr Harding-Rolls said. He went on, "Working together they have a better chance to head off competition from the likes of Google, which has gone on to dominate the last wave of technology disruption in the mobile space alongside Apple."

As the progenitors and dominant forces of mainstream, console-based gaming it could be argued that Microsoft and Sony will gain a shared benefit from joining forces in the face of new approaches to entertainment which leave their established gaming model feeling somewhat antiquated.

The precise elements of the partnership are wrapped up in assertions of collaborations involving AI, semiconductors and image sensors. However, the hardware expertise that Sony could offer may pay off for Microsoft if the Redmond based software titan can get its cloud computing integrated into more consumer products such as TVs and mobile phones.

“Sony has always been a leader in both entertainment and technology, and the collaboration we announced today builds on this history of innovation,” says Microsoft CEO Satya Nadella. “Our partnership brings the power of Azure and Azure AI to Sony to deliver new gaming and entertainment experiences for customers.”

Both companies continue to work separately on their next generation gaming consoles and there’s no indication that this partnership will impact on the core hardware approaches each is taking. However, could the streaming side now be provided by the same server infrastructure?

What do you think of this collaboration? Could it mean we’re a step closer to cross platform gaming? Let us know in the discussion thread.