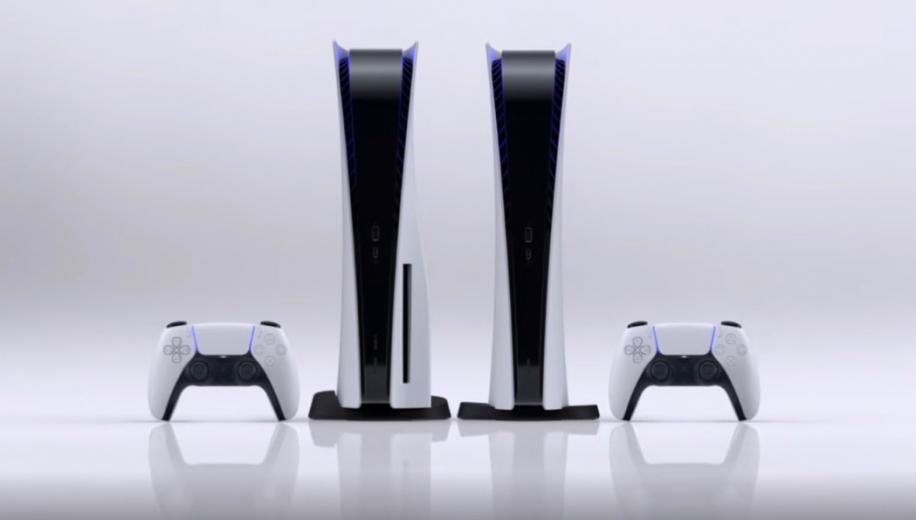 Dubbed, “The Future of Gaming,” Sony’s pre-recorded online event has showcased a number of games that are in development for its hugely anticipated PS5 console. And it finally gave the world its first look at the final console hardware.

Months of speculation, guesswork and some impressive fan art can all now be put to rest as Sony proudly unveiled its next generation gaming console - the PS5.

Matching the already revealed PS5 DualSense controller, the main console has white textured side fins sandwiching a central black core with grilles and blue strip lighting and which also houses the I/O ports. The promotional footage of the console seemed to indicate a vertical orientation was the preferred way of positioning the console but in actual fact the circular black stand looks like it can be repositioned in order to have the console in the flat, horizontal orientation too.

Overall, there’s a smooth, sleek curviness to the design which hints at power contained within.

There are two versions, the PS5 Digital Edition, which lacks a disc drive but looks all the more pleasing as a result and the PS5 which has a disc drive nestling in a side (or bottom) bulge that gives the console a rather asymmetric look, almost as if the drive’s addition was an afterthought once the discless design had been signed off on.

Aside from the DualSense wireless controller, Sony showed off a selection of hardware accessories, including a charging station for the controllers, which was shown cradling two of them, a dual lensed HD camera and the Pulse 3D wireless headset. Finally, there’s also a media remote control which will no doubt come in handy if you are using the disc drive version to watch movies.

The online event was 95 percent dedicated to games though and Sony assembled around 25 titles, including some updated favourites that will see the return of Rachet and Clank in Rift Apart, Sackboy in a A Big Adventure, Agent 47 in Hitman III Death Awaits and Aloy in the sequel to Horizon Zero Dawn which is called Horizon Forbidden West.

Of the new games that are being created for the PS5, there’s a number which look interesting including Ghostwire Tokyo which is due out in 2021 and which demonstrated some extremely spooky-tinged Matrix-style gameplay, while the Groundhog Day infused Deathloop features assassins killing each other over and over again and had some striking visuals to match its murderous plotting.

Of the titles that look like they’ll be ready for the PS5 launch during the Holiday Season at the end of the year, there’s Spider-Man: Miles Morales, racing simulator Gran Turismo 7, Godfall from Gearbox, The Far Shore from Super Brothers, NBA2K21 and Bugsnax which brings the childhood fear of turning into what you eat, to life. Additionally, the concluding part of the current Hitman World of Assassination trilogy will be ready for Jan 2021.

Other titles such as Resident Evil Village and Solar Ash won’t be ready until some time in 2021 while Pragmata isn’t slated until 2022.

What looks to be clear is that, as promised, developers are taking the tools that the PS5 offers and are using them to create immersive worlds and ideas that haven’t been seen before. Sure, there’s lots of impressive graphics that are on offer as you’d expect from brand new hardware this powerful but the promise of something new and different in the experiences on offer could actually come to fruition.