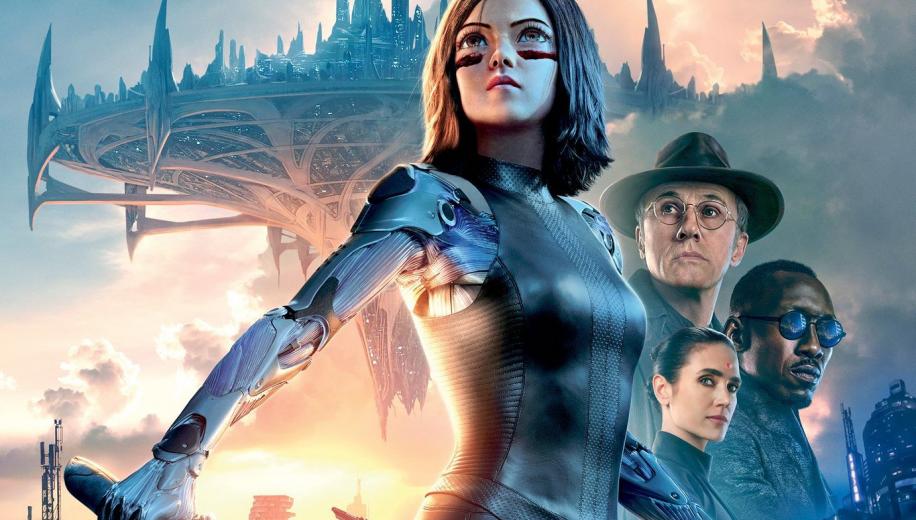 Twenty years in the making, James Cameron has finally brought his sci-fi/manga blockbuster to our screens, with help from director Robert Rodriguez and an eye-watering budget. The film was inspired by Yukito Kishiro’s Battle Angel Alita manga, and has been on Cameron’s radar since at least 2000. Of course, he’s had his hands full with a little film called Avatar and its many, many sequels since then, so Rodriguez stepped in to take the reins on Alita: a futuristic, CGI-goldmine cyberpunk blockbuster.

Set in the year 2563, the film centres around Alita (Rosa Salazar bolstered by some eye-catching stop-motion effects), a bodiless cyborg who is discovered and pieced together by Dr Dyson Ido (Christoph Waltz), a kind technical whizz who names his new robot pseudo-child after his late daughter.

Alita soon develops a friendship with Hugo (Keean Johnson), a local junkyard dealer who has some shadowy dealings with Vector (Mahershala Ali), the decidedly Machiavellian tyrant who rules over Iron City. Alita’s having some memory trouble, like so many sci-fi heroes from films gone by, though naturally as the film goes on she learns more about herself – not least that she’s a pretty handy fighter who packs quite a punch.

Alita: Battle Angel is a veritable feast of movie magic and technology, and certainly goes to show how far cinema has come even within Rodriguez’s career (remember Spy Kids 3-D: Game Over? Me neither). The title actually belies how much serious skill, technique and clever visual signposting there is, particularly within the first hour of the film. This is Pinocchio meets Blade Runner meets Ghost in the Shell meets Terminator… interspersed with some of the most eye-catching effects seen on screen for years.

Peter Jackson’s Weta Digital took care of the visual magic on display, and did a fantastic job. The film opens with aplomb, and introduces us to the postmodern, hyperreal and futuristic Iron City with genuine beauty. Plentiful fight scenes are actually extremely absorbing, and stunningly shot; 3D effects amplify everything to the nth degree, making for a visual feast that ends up being let down by a muddled, overly crammed script. Which is ironic, considering there are already plans for multiple sequels – more time on development and explanation would have rounded out this film and given the digital effects more of a platform. Salazar is truly one of the best things about the film, bringing charm, spike and plenty of character to the lead role. This is in spite of the fact that she’s hidden behind distractingly gigantic digital eyes; clearly a nod to the manga character that inspired the film, Alita’s eyes are incredibly eerie, and a needless distraction from the already scattered and dizzying film.

Alita combines a lot – a lot – of sci-fi elements with a refreshing and interesting take on the coming-of-age story as Alita discovers the marvellous extent of her powers, but ends up throwing so much else at the film that it all comes out a bit… much. There’s a half-explained planet backstory, a burgeoning teenage love story, a bizarre sport that takes on a mind-boggling amount of significance and lots of exposition that comes from clunky dialogue, rather than being displayed to the viewer through developed narrative.

The first half of the film is really enjoyable, all intrigue and innovation. It’s after the halfway mark that things go downhill, as Alita’s backstory isn’t well explained, plot holes start appearing with alacrity, and the Alita-Hugo lovestory becomes cloying, saccharine and entirely unnecessary. The film’s fixation on motorball (a truly weird sport that apparently holds Iron City’s inhabitants in thrall) apparently stems entirely from aesthetic need, and while it leads to a particularly lively sequence as Alita realises her (android) life goal of becoming a top motorball player, it’s also shoehorned into the film in nonsensical ways. It is a fabulous way to combine Rodriguez’s wheelhouse – big-hearted B-movie style scraps – with the big-screen techno-blitz.


If you’re keen to see Alita you absolutely must see it on the big screen, and it’s one of the rare occasions where 3D and IMAX is well worth it

As the title and trailer suggest, this is for all intents and purposes a non-serious, somewhat silly film – it’s futuristic sci-fi where the lead character is a feminine android with diabolically dish-shaped eyes and unearthly fighting skills. But suspend your disbelief, and this is an example of what true blockbuster films should really be like – big, bombastic and blustery; shiny, sensational and spectacular.

There are so many plot holes and loose threads by the end that it’s almost laughable how much Alita is set up to have sequels. This, combined with some weak character development, a pretty mirthless script and a plotline that leaves plenty to be desired could add up to a valueless blockbuster romp; instead, truly impressive visuals, a winning performance from Salazar and exciting plotting (particularly during the first hour) make this an enjoyable film with plenty of fun. It’s not got the humour you’d maybe expect of a Rodriguez film proper, but there’s such futuristic technological showmanship on display it’s hard to notice.

If you’re keen to see Alita you absolutely must see it on the big screen, and it’s one of the rare occasions where 3D and IMAX is well worth it!