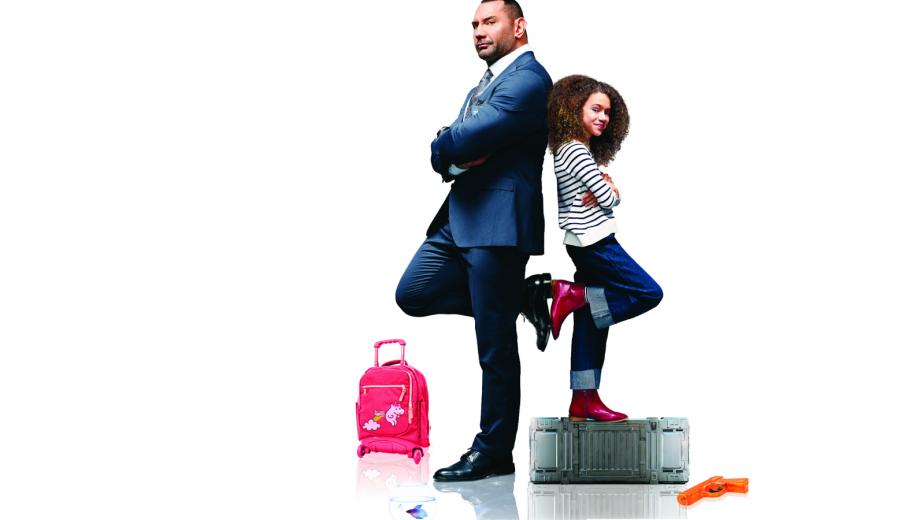 A surprise last-minute entry to the "Amazon Original" banner, Dave Bautista's My Spy proves a light but surprisingly fun and funny ode to Arnie's Kindergarten Cop that enjoys plenty of hilarious film references.

The poster and trailer - if you got that far - don't do a great deal to sell this new action comedy from Bautista, who enjoyed a spectacularly hilarious dryly super-witty role as Drax in Guardians of the Galaxy, but hasn't quite been able to convert that into an enduring new angle to his career, despite his best efforts in Stuber and now this. But don't be so quick to write off this 2020 reworking of Kindergarten Cop; it enjoys a very self-aware attitude, playfully paying tribute to a whole host of movies and earning kudos for a game Bautista and a spunky counterpart in Big Little Lies' wannabe-spy Chloe Coleman.

Don't be do quick to write off this 2020 reworking of Kindergarten Cop; it enjoys a very self-aware attitude, playfully paying tribute to a whole host of movies

Hunting a dangerous arms dealer, US Special Forces soldier turned CIA newbie JJ is forced to undertake a complicated stakeout, watching over the arms dealer's extended family for when contact is made. When his cover is blown by the arms dealer's nine year old niece, Sophie, JJ is coerced into basically being her own personal bodyguard, which eventually devolves into literally taking him back to school.

After an explosively over-the-top and suitably fun intro sequence, JJ's boss - played perfectly by the ever-reliable Ken Jeong (Hangover, Community) - chews him out for little reason (c.f. the start of Seagal's Exit Wounds) and dumps him on an assignment he doesn't want with a partner he fails to acknowledge (Toy Story's Kristen Schaal, on superb form), leading him to the kid and her potential love interest mum (Parisa Fitz-Henley from Jessica Jones and Luke Cage). The chemistry between Bautista and Schaal is very good, as her computer nerd agent fawns over the super-soldier, and this is keenly reversed when the kid (Coleman) hits the scene, proving to be more than a challenge when it comes to all his spy techniques, and often able to outwit the tough but indelicate JJ.

It's silly, but it absolutely knows it, trading in a number of excellent references - the best of which are often overtly called-out by the characters themselves "all we need are Nazis" when a fight takes place near the propellers of a slowly moving plane; or jokes about Mickey Rourke's Russian accent in Iron Man II. The self-awareness and sense of humour is hard to resist, particularly for fans of the genre, with a personal favourite recreating a montage from the underrated Redford/Pitt thriller, Spy Game, to delicious effect.

The action is also pretty good, really, for this kind of family feature, from the heavily stylised opening sequence to the closing chase and peril moment, where - despite knowing the ultimate outcome (it's still genre fare, irrespective of nuances), you don't quite know how they're going to get there. And with no sign of blood, it's only the occasional, lesser, swearing that would suggest that perhaps it's not quite for viewers below the age of the 9 year old protagonist.

A self-aware, meta action-comedy, which lovingly updates the basic formula of 1990's Kindergarten Cop, and contains not only a bounty of competently staged action sequences but also some superb humour for the adults who are watching, My Spy is far better than it has any right to be. Sure, it'll never be a classic, and it might not have survived a theatrical run given the borderline rating (it's still a 12A for a reason, but that's easier to mitigate at home), but this is perfect Amazon Prime Original material (and a bonus in 4K HDR, as we'd have likely never had a physical 4K release), and prime family entertainment during the lockdown.