“I didn’t begrudge it my time” – Tom Davies. Now there’s box copy for you! 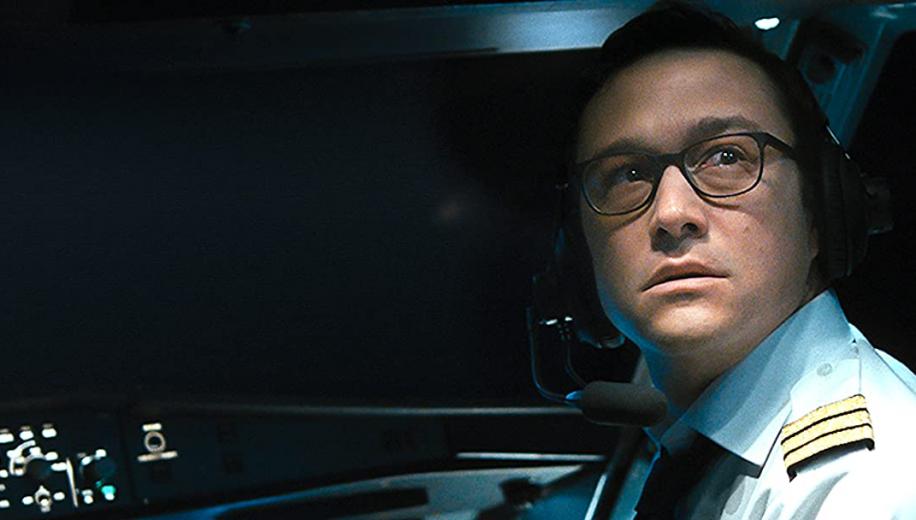 Aeroplanes are a great way to bottle your characters for maximum dramatic tension. Trapped in a silver tube at 35,000 feet, held aloft by nothing but goodwill and magnets (I don’t know how aircraft work), it’s a crucible for heroes to test their mettle. Add in some terrorists and a hijacking and you have all the ingredients for some high-stakes thrills. Die Hard 2, Air Force One, Executive Decision – these have plenty in common with each other, but not so much with the real world. Amazon’s new movie, 7500, starring your favourite actor and mine, Joseph Gordon-Levitt, attempts to redress that balance.

Co-pilot Tobias Ellis (JG-L) is methodically making the initial checks on his flight from Berlin to Paris. It’s set to be a clear run with a small measure of iffy weather. His girlfriend, a member of the cabin crew and the mother of his son, is visible through the cockpit door. The captain is impatient to get moving and is griping about late passengers. This is a normal day at work for Tobias. Until the plane reaches cruising altitude and a four-man team of fundamentalist hijackers reveal themselves, laying siege to the cockpit.

It’s not ground-breaking stuff, but you can't knock it for its effectiveness.

The film demonstrates real self-confidence in its opening, allowing long silences to punctuate mundane checks and small talk while the cockpit door camera displays little but the curtain between the cabin crew and passengers. An awful lot is achieved with very little and the result is one of the tensest opening acts likely to be seen on film this year.

Within the movie's established boundaries, cinematographer Sebastian Thaler cultivates effective claustrophobia through shooting in much closer quarters with much tighter angles than are necessary, making the cockpit seem even smaller than it really is. Shots seem forever bordered by walls or furniture, effectively making the audience feel like they’re an intruder into this space, craning their neck and getting in the way. It’s not ground-breaking stuff, but you can't knock it for its effectiveness.

Not all of the braver initial choices work without caveat, however. There is, for example, a lot of telegraphing in the early scenes of exactly what’s going to become important later in the film. Some of it feels a bit like being hit over the head - the coincidences are slightly too many to be truly plausible. There is a disconnect with the outside world established early on too. The use of security camera footage in the opening scenes of the airport, the blank windscreen and the cockpit door camera are the only portals into the outside world for the majority of the film. This blackout succeeds in creating a pressure cooker of the film’s only set, the cockpit, and enables Tobias to make some hauntingly difficult decisions by choosing which of the terrorists’ actions he witnesses. But it also creates a barrier between us and the passengers on the plane, diminishing the effect of some of the intended gut-punches.

The point at which the focus expands to one particular member of the group hijacking the plane is the point at which the film really loses its footing and becomes mired in stale negotiation and subterfuge games. Scenes of attempted connection between Ellis and his hostage-taker are punctuated by brief scuffles which, rather than bringing us to the humanity of the aggressor, serve to highlight just how underwritten and two-dimensional this reluctant young fundamentalist is.

Through it all, however, is one aspect of the film which holds everything together: the strong central performance from Joseph Gordon-Levitt. His meek manner, shifting to shock, distress, despair and resignation speaks to a believable, relatable character. Not a hero, but just a man doing his job under the worst imaginable circumstances; masking his agonising moral decisions with his professional responsibilities, reverting back to reciting his actions, both for the benefit of the flight recorder and to centre his mind, enabling him to continue to fly the plane. It’s characteristically excellent of JGL who continues to show a depth and breadth of ability that remains generally underappreciated in Hollywood. It’s not that without him the movie would fail – indeed, the also very talented Paul Dano was originally set to star – but he truly carries the film through its less turbulent moments.

In the moments where the film achieves the balance of heightened realism that it’s reaching for, 7500 is heart-stopping. Sadly, a plot development at the halfway point and some stereotypical terrorists twenty years out of date all but take the rocket fuel out of the jets (did I mention I don't know how aircraft work?) and has the film simply gliding to its inevitable destination. It’s almost a neat little film and, although I didn’t begrudge it my time, it all falls apart just a little too easily.