A suburban drama fanning the flames of inequality 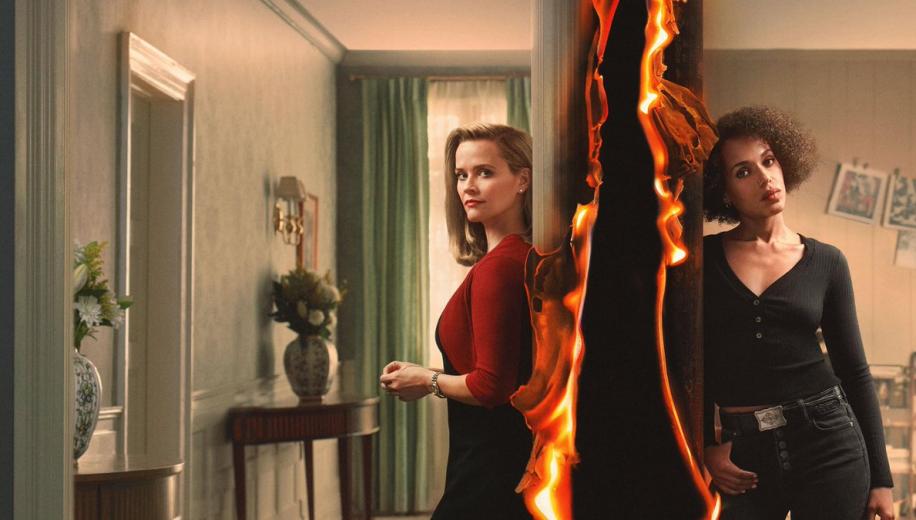 Perfectly timed if it feels as though you’ve burned your way through everything else on streaming services during the hundreds of weeks of lockdown we’ve already had, Little Fires Everywhere stars Kerry Washington and Reese Witherspoon and is based on Celeste Ng’s 2017 bestseller.

The drama is set in Shaker Heights, an affluent suburb in Ohio, and begins with a rather large fire that has destroyed the home of Elena Richardson (Witherspoon). Her rebellious daughter Izzy (Megan Stott) is presumed to be the cause of the blaze, which a fire marshal says was actually caused by – wait for it – “little fires everywhere”.

The storyline that hops back in time a little to introduce us, and Shaker Heights, to Mia Warren (Washington) and her daughter Pearl (Lexi Underwood). Elena’s first response to seeing the black family asleep in their car is to call the police, and her resulting guilt eventually leads her to find the Warrens a home and offer Mia a job as her “house manager”.

The little fires of the title aren’t just the ones set in the arson; they’re the flickering embers of tension that arise when two worlds collide

The beginning of the first episode might suggest a sort of whodunnit about the fire, though the series isn’t really about that at all. It’s a drama about mothers and families, and what happens when worlds collide in the most unremarkable of neighbourhoods.

Elena is a searing portrait of a character lots of us know or have seen (most likely on Facebook) – the minimum middle class white woman who ostensibly means well and throws out phrases like “I just don’t see colour.” An early example of her racial insensitivity occurs when her husband Bill (Joshua Jackson) wonders whether asking artist Mia to be essentially a glorified maid is a bit racist, and Elena enthusiastically counters that not offering her a job because she was black would be racist.

It’s not just Elena, either – we’re introduced to this world of potentially well-meaning rich people and shown in no uncertain terms the social, economic and ideological differences between the Elenas of the world and the Mias. When Elena’s friend Linda (Rosemarie De Witt) calls Elena “Superwoman” for letting her spare home to Mia as “charity”, we get a fuller understanding of the ways in which this society views Mia, immediately.

Clearly, this is a series with issues of class, race and family at its heart. There are parts – many, many parts – of the eight-episode arc where it’s dealt with exceptionally. But there are other areas where storylines and tensions are repeated again and again, which does serve to strengthen the characters’ interests, but makes some episodes feel a little like treading (well-acted, well-written) water.

Pearl is very keen on spending as much time at the Richardson house as possible, which means interacting with Elena, Bill and their kids Izzy, Lexie (Jade Pettyjohn), Moody (Gavin Lewis) and Trip (Jordan Elsass). Mia’s conflict between wanting to placate Pearl and her deep rooted (and valid) misgivings about Elena doesn’t stop the two families becoming fatefully intertwined. The little fires of the title aren’t just the ones set in the arson; they’re the flickering embers of tension that arise when two worlds collide.

The series does begin to fizzle out a little bit when it becomes less a close-up portrait of these family struggles – which function as a microcosm for broader societal issues of race relations in a really effective and watchable way – and more a bigger sweeping narrative. The series introduces another player, Bebe Chow (Lu Huang), an undocumented immigrant who’s searching for her daughter, and things start to get a little convenient, favouring typical TV melodramatics over the really interesting topics the first episodes threaten to explore.

The addition of the racial politics makes for a topical, high-stakes and emotional drama, and the casting of Washington and Witherspoon is pitch perfect.

All that said, it’s a fantastically engaging show from start to finish, thanks in no small part to two year’s best leading performances. It will come as no surprise to anyone who’s had the pleasure of watching either Witherspoon or Washington’s work on Big Little Lies or Scandal that both are fantastic in Little Fires Everywhere. Washington has one of the most expressive faces in television, and has mastered the art of realistic portrayals of extreme emotion – she’ll let Mia come right to the cusp of a breakdown before visibly pulling herself together. Witherspoon is, of course, fantastic at lending heart to even the most superficial characters, and brings a depth and realness to Elena that belies her unlikable surface. It’s starting to feel like you simply can’t have a sleek skewering of the suburban middle class without casting Witherspoon as a feisty Type-A.

Witherspoon’s portrayal of Elena is multi-faceted. It’s hard not to feel for her when Mia bristles against her slights, though there’s no one who can play vindictive suburban rage when she needs to quite like Witherspoon. Her scenes with Izzy and Bebe are particularly heartwrenching. Elena and Mia’s relationship starts cool, begins to warm and then shatters into shards around episode 4, Witherspoon’s portrayal of Elena’s hurt, anger and defensiveness is exquisite. Washington’s Mia is poised, passionate and present; she’s unafraid to stand up for herself and her beliefs, and Washington’s delicate expressiveness means she’s incredibly empathetic.

While introducing many laudable and vital differences to the source material – for one, in the book Mia and Pearl’s race isn’t mentioned, though it’s inferred that they’re white – the series doesn’t quite manage to capture some of Ng’s nuanced social criticism, which is probably understandable considering it’s a brisk-paced eight-episode series. The addition of the racial politics makes for a topical, high-stakes and emotional drama, and the casting of Washington and Witherspoon is pitch perfect.

The show repeats a lot of things – the same arguments are had over and over, tropes and themes are brought out time and again – and veers a little too close to soap opera territory at times, but still succeeds at being a scorching portrayal of ordinary lives and the way we treat each other. Viewers who enjoyed Big Little Lies will be enthralled with Little Fires Everywhere, though there’s plenty more here too for those seeking drama and conflict with well-written and superbly acted characters. The melodrama flame does burn too bright at times, but the series smoulders from start to finish and is worth the price of admission for the duelling leads alone.