Just one last job and then you'll retire? Really? 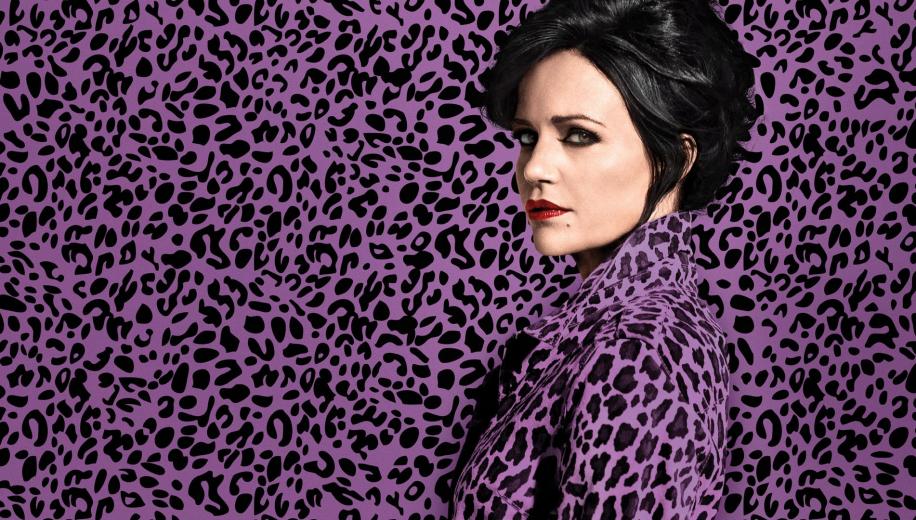 Gugino has always felt a little underserved by her projects, seldom really required to stretch herself, and mostly reliant upon pure sex appeal to keep audiences. A fond favourite of Robert Rodriguez (cast as a regular in the Spy Kids franchise, as well as Sin City), she recently enjoyed a decent Big Screen role opposite Dwayne Johnson in the enjoyably daft disaster romp San Andreas, as well as some small screen prominence in Netflix's The Haunting of Hill House, but most of her attempts to go solo have landed badly, with her Out of Sight spin-off series (well-chosen to replace Jennifer Lopez on the small screen), Karen Sisco inauspiciously cancelled before anybody even got to see all of it.

Pushing 50, despite looking far from it, Jett finally sees Gugino headline a project which is at least a modest success - or has at least been promoted as such - although, looking behind the scenes, it would appear that long term partner Sebastian Gutierrez may have had a hand in this, having cast her in every single one of his productions (often in the lead), and now creating what appears to be little more than a vehicle for her. Nepotism it may well be, but it's not like Gugino hasn't worked hard to finally get this opportunity.


Jett is pretty-much what you would expect from Cinemax - lots of sex, unabashed nudity, heavy stylisation, violence and a thrumming soundtrack
Daisy "Jett" Kowalski is a retired thief, relatively fresh from a stint in prison, with a young daughter she wants to make up time with, and little desire to go back behind bars. Nonetheless, she's drawn back in for one last job, soon finding it going off the rails and getting very bloody very quickly, as Jett gets stuck between warring crime bosses, undercover sting operations and an assortment of brutish criminals, whilst skipping backwards in time to figure out how she got in this mess.


Jett is pretty-much what you would expect from Cinemax (compare with their recent, better, Warrior), and that's not necessarily a bad thing - lots of sex, unabashed nudity, heavy stylisation, violence and a thrumming soundtrack. Apart from Gugino, almost all of the other cast members appear to be under standard Cinemax full-frontal contract conditions (including Nightflyers' Jodie Turner-Smith, soon to be in Queen & Slim, Peaky Blinders' Gaite Jansen, and The Skin I Live In's Elena Anaya), although there is still some attempt to keep it relevant. Refreshingly, there is some long form work her on character design to tie in even those mostly naked players, and we don't just get background into Gugino's career thief, her work woes, betrayals, time in prison and how she got into this complicated mess, but also how she made lifelong trusted friends (Anaya's backstory is particularly well developed, and Jansen's isn't far behind) as well as her less trustworthy acquaintances.

Initially, it relies a little too heavily on style over substance, often plotting thickly but not always cleverly. In some ways this makes it feel like a bit of a bloated, more gratuitous Out of Sight (but with the sex of the protagonist reversed) which is probably where it gets the noir labelling from. However, without that razor-sharp Elmore Leonard dialogue to carry you through, and with Gutierrez on writing and directing duty, for which he can only muster a certain amount of panache, it feels like it is overly reliant on split-screens and vibrant palettes to paper over the cracks; only succeeding half of the time. The irony of this succeeding, where Gugino's actual Leonard-based Karen Sisco series did not, would not be lost
but, in a way, faux Leonard is still better than no Leonard, and Jett thankfully does appear to have some kind of a plan to unfold over its first season, rather than just throwaway episodic frivolities, building palpably and organically until it becomes something really quite decent.


Those who jump after one episode won't care either way, but those who stick with it will want to know what's next in store for Gugino's seductive protagonist, which is certainly the mark of a show doing something right

A slew of familiar faces pop up in varying degrees of supporting roles - The King of New York's Giancarlo Esposito (recently in The Mandalorian), Ally McBeal's Gil Bellows (recently in The Handmaid's Tale) and Star Trek's Bruce Greenwood (recently in Doctor Sleep, although it's also interesting to see him back opposite Gugino after their work on Netflix's adaptation of Stephen King's Gerard's Game) - giving it a little extra colour, and whilst that doesn't save the lightweight opening episode, the bit players gradually embrace the maelstrom, and the end result is all the better for their more experienced presence, even in the background.

Gugino is still the obvious draw, however, and she commits to the opportunity to lead the heady mix, giving you an anti-hero protagonist to at least interest you and mostly root for, and one who is far from squeaky clean. Even if it's not always easy to root for the show, she helps push past the pain point and eventually becomes the show, so you find yourself hooked anyway by about 4 episodes in, needing to know how her anti-hero is going to masterplan her way out of this situation, and maybe even caring about her and those lost souls close to her.

The long-form narrative is nowhere near as painfully stretched as it would have been on Netflix (Cinemax have a much better track record in this regard), building to something quite rewarding and the visual dynamic - whether the 'style' or the sexuality - certainly doesn't make it an unpleasant watch, and somehow, possibly unexpectedly, it actually becomes impressively visual by the halfway mark, rather than just reliant on pure style, developing a somewhat flimsy start into an almost promising finale, even if silence over any renewal yet (which doesn't particularly bode well given it finished airing in the US some 6 months ago) may frustrate those who are pot-committed. Those who jump after one episode won't care either way, but those who stick with it will want to know what's next in store for Gugino's seductive protagonist, which is certainly the mark of a show getting at least a few things right.