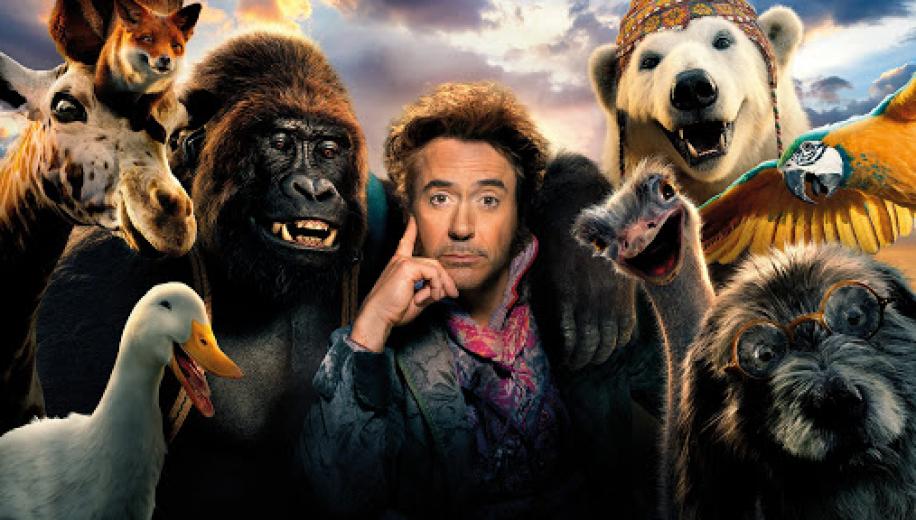 Something smelled wrong - and that's coming from the guy who loves the smell of butts.

Dolittle is fuelled by what feels like a ridiculously dubbed "Welsh" performance from Robert Downey Jr., a bloated, big budget monstrosity which offers precious few charms - even for kids - and never comes close to recapturing the magic of its opening animated prologue.

It was always interesting to see what Downey Jr. was going to do post-MCU, but nobody could have possibly anticipated this, with Universal throwing a Disney-sized budget at this live action remake and succeeding in providing the best CG money can buy (much like Disney's The Lion King and The Jungle Book remakes), but failing to put together any kind of compelling story whatsoever. Worse still, Downey Jr's particularly odd performance hardly endears you to this eccentric soul, whose way with animals should have ideally been at the very least a source of childlike wonder, but ends up closer to a ludicrous farce.

Dolittle's opening animated prologue is tremendous, making you almost wish for that film, carrying action, adventure, romance and tragedy on its sleeve, but everything goes wrong right from the opening live action sequence, with Downey Jr called upon to do some ridiculous things - even for a character who is already called upon to communicate with all animals in their own language. It doesn't help that his 'Welsh' accent is appalling and quite clearly appears to have been mostly done in post-production, with ADR, so - despite perfect lip-sync - it sounds like horrific dubbing and totally undermines the character. There is some comedy that vaguely works (the voice cast is expansive, but only a few - like Octavia Spencer and Ralph Fiennes - own their roles), and Michael Sheen is a suitably dastardly antagonist, but this was still a monumental megablockbuster misfire of epic proportions.

Dolittle comes to UK 4K Ultra HD Blu-ray courtesy of Universal, in the wake of its likely identical preceding US counterpart, with a pretty flawless 4K presentation for this Ultra HD Blu-ray release, despite the ostensible limitations of a 2K digital intermediate.

Dolittle was shot at 8K resolutions, it's initially a little disappointing to find the 4K release supposedly restricted by a 'mere' 2K digital intermediate, but the reality is that this is a spectacular video presentation, enjoying the broader, projector-friendly 'full' widescreen scope, and making the most of its absolutely seamless CG implementation, which is prevalent throughout and which affords some striking shots in the vein of Disney's live action versions of The Jungle Book and The Lion King. Detail is impeccable throughout, from facial hair to weathered clothing, dilapidated settings and even during the superbly lit night boat sequence.  Clean and crisp and excellent, it's a fabulous 2020 presentation.

Of course, HDR and WCG, along with the added enhancement of Dolby Vision (and HDR10+) bring a wonderful added level to the piece, giving it a warmth and vibrance, not just with the brighter and more colourful tones, but also in the textures and colours of the key animal characters. The dark blue night tones, the bright blue daylight and lush green backdrop for the opening sequences, everything is fabulously rich and vibrant and - even if the film cannot say the same - the presentation doesn't put a foot wrong.
﻿

Dolittle's Dolby Atmos track is pretty damn flawless too, afforded range and depth, and some decent LFE weight to boot, as it attempts to turn this flop into at least an engaging audiovisual voyage.

Assaulting you with animal-speak from every direction as well as more traditional animal noises, this is quite a hectic object-based immersive audio track, fully utilising that extra dimension to the soundscape as it brings crashing waves and stormy weather, roaring lions, polar bears and gorillas, and booming cannon. The initial sequences make you feel like you've entered a veritable zoo, and this immersive cacophony remains pretty consistently throughout. It's an excellent track.
﻿

Dolittle's 4K release has another nice surprise: the 4K disc itself has all the extras, however limited, porting them over from the accompanying Blu-ray.

The 4K disc has all the extras

Unfortunately they're largely fluffy EPK pieces, with about a half a dozen mini-Featurettes running little over a couple of minutes in length each, with half of them rather unbelievably dedicated to Downey Jr's character and performance.

Dolittle is messy Blockbuster flop; a misfire whose interest in CG perfection (which it nails) surpasses its desire for coherent storytelling or character design, with Downey Jr. in particular in a role that's too eccentric even for his eccentricities.

Should have been at least a source of childlike wonder, but ends up a ludicrous farce

Universal's UK 4K Blu-ray release of Dolittle﻿ affords arguably one of the best 4K Dolby Vision enhanced video presentations of 2020 and a stunning Dolby Atmos track to boot, and even ports over all the extras, which is sure to at least please fans of the film.