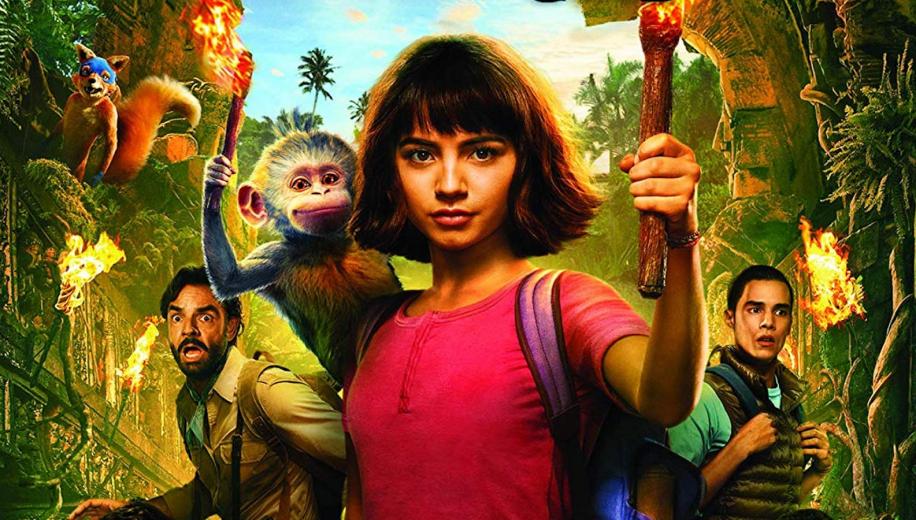 Dora and the Lost City of Gold Film Review

Arguably better than anybody could have possibly expected from a live action adaptation of the animated kid's show, Dora is a fun family adventure where the peril never gets greater than a 6 year old can handle.

For 20 years Dora the Explorer - Nickelodeon's 'educational' animated TV series - has entertained generations of children, interacting with audiences using its fourth wall-breaking style, and helping kids to explore different languages and cultures, not least through its Latina protagonist. In some ways, a live action adaptation was only a natural progression, although there were all kinds of ways it could go wrong, but Dora and the Lost City of Gold largely sidesteps potential pitfalls, embracing the quirky idiosyncrasies of its forebear and channelling its protagonist's wide-eyed exuberance in the direction of an Indiana Jones-lite adventure.

Dora has a tough task ahead of it, juggling catering to the sensibilities of children and adults - a broad spectrum audience which only really Pixar has cornered, but which surprise entries like Bumblebee and Spider-Man: Into the Spider-Verse have managed to also pull off - as well as dealing with both newcomers and seasoned fans, all of which it deals with admirably by introducing Dora at age 7, as a girl who randomly speaks Spanish to the camera sometimes (much to the amusement of her parents - who include an on-form Michael Pena) and has a CG monkey friend who likes red boots, and whose adventures with cousin Diego are largely just in their imagination (but do involve a pesky CG fox who swipes stuff), and then skipping forward a decade to give us the film's slightly less cartoonish protagonist.


Indiana Jones, Jumanji and Crocodile Dundee rolled into one, and reworked for pre-teen sensibilities

Isabella Moner's 17 year old Dora is still bounding around the jungle, and it's only her fish-out-of-water transplant to the Big City that (nearly) takes the wind out of her sails, reminding of a teen Crocodile Dundee as she passes a backpack full of survival gear through the school metal detector or pulls a "that's not a knife, this is a knife" out when needed. There's plenty of room for gags at school, but it's when we head back to the jungle that the real Indy adventure begins, bringing with it deadly plants, quicksand, and even a hallucinogenic trip back in time, as well as a whole host of traps and puzzles to solve before time runs out.

Moner carries the show, and it's amazing that - after Michael Bay managed to sexualise her 15 year-old self back in Transformers: The Last Knight - they managed to de-sexualise her even now she's 18, and turn this into a surprisingly wholesome family-friendly outing that fits the gap for kids who are ready for a little more than Pixar's (admittedly excellent) animated fare (or Frozen II), but aren't quite ready for Jumanji: Welcome to the Jungle, or Marvel, at least not at the Big Screen.

It really is Indiana Jones (particularly The Last Crusade), Jumanji (particularly the reboot/sequel), and Crocodile Dundee rolled into one, and reworked for pre-teen sensibilities, and whilst diluting these classics down to this makes for a distinctly light watch for adults (you need to drop at least a point off the score if flying solo), it's a nice introduction to stronger stuff for kids, and far, far better than you could possibly expect from a film based on Dora the Explorer.

Dora and the Lost City of Gold Blu-ray Picture


Dora and the Lost City of Gold makes its UK Region Free Blu-ray bow just a couple of weeks after its US release, sporting likely the exact same 1080p/AVC-encoded High Definition video presentation, framed in the movie's original theatrical aspect ratio of 1.78:1 widescreen.

Shot digitally and even afforded a 4K Digital Intermediate, it's somewhat surprising that Dora didn't get a full fat 4K release, but perhaps that will come down the line if this turns into something of a franchise, and nonetheless, the 1080p Blu-ray renders a very handsome picture indeed. Detail is pretty-much perfect throughout, lapping up beads of sweat, matted hair, dirt and clothing weaves, enjoying the rich jungle environment and all the trappings of the Indy-like temple. The colour scheme is also gorgeous, perfectly promoting the primaries on offer - Dora's shorts - with vivid blues, purples, oranges and - of course - the luscious greens of the vibrant jungle environment. Black levels are rich and strong and form a backbone to a largely flawless demo presentation.

Dora and the Lost City of Gold Blu-ray Sound

Surprisingly we do get a Dolby Atmos track, which is absolutely terrific
Perhaps surprisingly - given that they didn't deliver a full 4K release - we do get a High Definition 3D Object-based Immersive Audio Dolby Atmos track, which is absolutely terrific. Dialogue is clearly and coherently delivered throughout, taking priority over the jungle hijinks and over-dramatic score, disseminated across the frontal array, whilst effects bring the jungle alive with dynamics and surround usage is very good indeed. Whether sinking into a bog, rolling down a hill in a log, or being engulfed in a chamber full of water, or whether facing myriad puzzles, pits of flames or collapsing temples, the array puts you right in the thick of the maelstrom, giving weight to the more punchy impacts, and sweeping you up in the adventure. LFE input is noticeable and the score, whilst a lite variation on the kind you would expect for this kind of teen adventure, still knows when to deliver a rousing theme and when to dial up the tension. Overall, it's a great track.

Dora and the Lost City of Gold Blu-ray Extras

A few Featurettes, some Deleted Scenes, and some Bloopers comprise the extras

Dora and the Lost City of Gold Blu-ray Verdict

Dora and the Lost City of Gold Blu-ray Review


Dora sidesteps potential pitfalls, embracing the idiosyncrasies of its forebear and channelling its exuberance in an Indiana Jones-lite adventure
Dora and the Lost City of Gold earns an excellent video presentation and superb - and perhaps surprising - Dolby Atmos audio track, as well as a nice selection of extra features, leaving this a great little Blu-ray package for fans of the film to pick up.

Blinded by the Light Blu-ray Review