When a character prophesies at the start of the film that the end is near, you'll wish it were true. 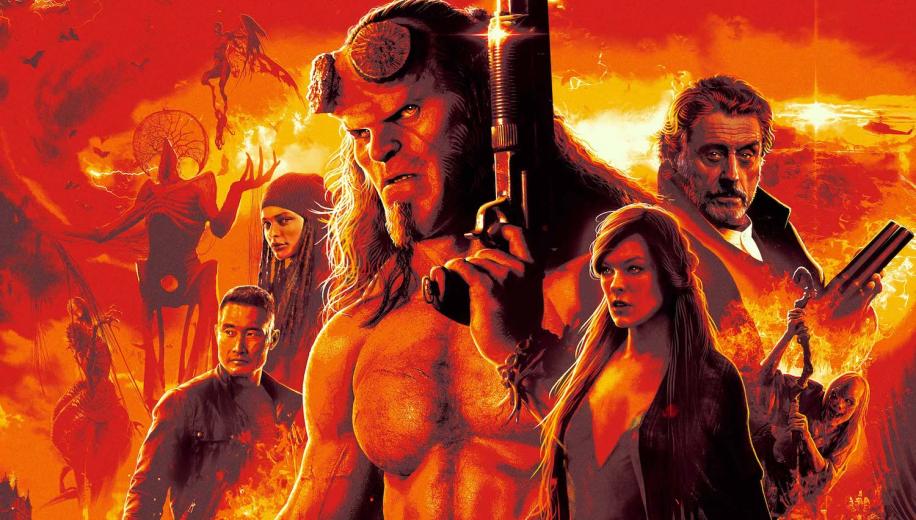 No match for Guillermo del Toro’s vision of Hellboy, this reboot feels like half-finished mindless entertainment, only without the entertainment.

For those who don’t know, Hellboy began life as a comic book character created back in the early nineties by Mike Mignola. As with many comic book characters Hellboy was eventually turned into two feature films written and directed by Guillermo del Toro in 2004 and 2008 and was met with a fairly positive response. But alas, as the new tradition suggests, the adaptation has now been rebooted and we have been given another rendering of this big red beast and his story.

There’s a brief moment during the opening scene of the latest rendition of Hellboy that leaves you unsure whether it’s just another production company’s animated logo or the actual movie. And as soon as Ian McShane’s voice-over begins you realise both that this is the movie and that it certainly does not have the previous Hellboy maestro at the helm; and I have a strong suspicion that despite any shortfalls his two films had, audiences across the land will find themselves longing for Guillermo’s Hellboy by the end.

Thrust from the depths of hell as a baby, Hellboy was taken in by Professor Broom (Ian McShane) and brought up to go into his adoptive father’s line of work: keeping the forces of evil at bay and making sure the world lives to see another day. But certain factions fear that Hellboy will actually bring about the end of the world and will undo their efforts. So when rumours start circulating that a once-vanquished, all-powerful and almighty sorceress has been resurrected, Hellboy and his crew must stop this wicked witch from regaining her powers before it’s too late. Director Neil Marshall (The Descent) and writer Andrew Cosby have taken the fairly tame and classically ‘super-hero’ films from Guillermo and regurgitated up something entirely different. Combining folklore surrounding none other than King Arthur, occult dabbling nazis, a secret government organisation (Bureau of Paranormal Research and Defense) and a wicked witch hellbent on bringing about the apocalypse, Marshall and Cosby’s Hellboy is a wholly different, and not for the better, kettle of fish.

It skims over the backstory adding in flashbacks to flesh out the bare bones of the main story. The actual storyline of the film is pretty basic — save the world before that bad guys end it. But it is just too basic, there’s something to be said for those films where you ‘check your brain at the door’ but Hellboy goes way beyond that and feels like a bad straight to video type film, that would be found in the bargain bin. The script is all over the place with cheesy one-liners, eye rolling and groan worthy attempts at comedy. The unnecessary amount of pointless swearing wears thin almost immediately and brings absolutely nothing to the table and winds up feeling like it’s trying to score cool points with the kids. There is also too much gore oozing from every orifice, flitting between budget B-movie CGI and looking moderately half decent.


David Harbour is not quite Ron Perlman's Hellboy, but he is the only good thing about this movie

The one and only saving grace for this ramshackle remake is David Harbour as the titular Hellboy. He’s not quite Ron Perlman’s Hellboy, but he is the only good thing about this movie. Harbour’s gravelly voice, dry sarcasm and looming frame work well as the rouge horned demon-come-god. He’s not quite the smooth talker that Perlman was and adds a rougher edge to this Hellboy, but it works. Sadly though, Sasha Lane - who was great in her acting debut American Honey - is completely miscast and wasted here as speaker-with-the-dead, Alice, sporting a terrible English accent. Unfortunately, Milla Jovovich doesn’t fare much better (and watching her here feels like watching her in the first Resident Evil from 2002 today and realising how schlocky the ‘special effects’ were) and also attempts an English accent (and fails) in her role as Nimue, The Blood Queen. It’s almost as if the writer ran out of steam when it came to giving the other characters any decent dialogue and hoped that Hellboy would be enough to carry the film through from start to finish, which sadly it is not.

Hellboy is sadly not going to surpass its predecessors from 2004/2008. At about 2 hours long, every minute is felt and that’s with elements of the story line feeling half finished. It is not even mindless entertainment - perhaps mindless but nowhere near entertaining… except for maybe David Harbour.

The Trial of the Chicago 7 (Netflix) Movie Review