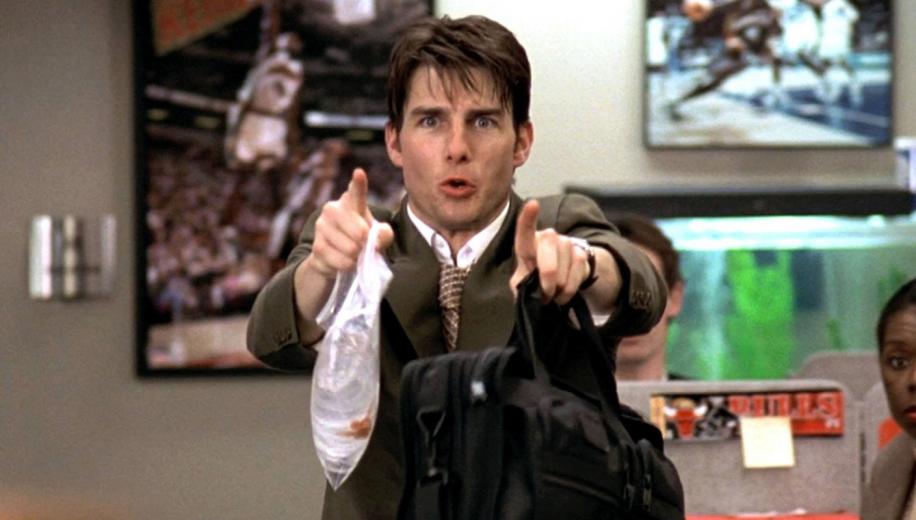 Did you know that the human head weighs 8 pounds

Even in 1996 the genre of the romantic comedy was already well established, but where Jerry Maguire sets itself apart from the crowd is with its setting and talent. Let’s face it, the story of a cynic finding compassion and love is hardly new, but placing it in the cut throat world of sports agents was something unseen, and with Tom Cruise, Cuba Gooding Jr. and Renée Zellweger, all young, enthusiastic talent in front of the camera, and with Cameron Crowe behind it, the stage was set for something a bit special.

Everything about the film screams classic

Jerry Maguire doesn’t stray far from the path, its hard-nosed protagonist, with his ‘think-of-number-one-money-is-king-let-nothing-get-in-the-way-of-profit’ approach immediately recognisable, and while his about face is a bit quick, it is played well, with his redemption coming late in the day, there is obviously no doubt where it is going. But winning over the audience is the cast; Renée Zellweger, who has made a bit of a career out of such characters, is delightful as the single mum and love interest, while Cuba Gooding Jr. is a blast as the only athlete to stick with Jerry, winning an Academy Award for the effort. Even the kid, Jonathan Lipnicki, is a winning character! Indeed, I’d argue that the weakest link is the main star Cruise, and whilst he does nothing wrong, his chemistry with Zellweger is questionable and his height kept pulling me out of the picture (the one two-shot he had with Zellweger she had no shoes on and they were the same height, but in any close up he’s taller …!).

Nit-picking, I know, because the film is a winner throughout; it is very difficult not to be drawn into the set up, the believability of the situation and the way the characters react is wonderfully drawn and of course it has those two great lines, ‘Show me the money’ and ‘You had me at, hello’. Everything about the film screams classic.

The result is a beautifully filmic presentation that is wonderfully detailed; skin texture, clothing weaves, fish scales, table settings, sports crowds, paparazzi cameras – everything has keen and tidy edges. The WGC and HDR give an intensity to the colours with all the primaries having a depth and vividness lacking in the 1080 image. The black level is rich and intense giving good depth, while the white scale gives highlights real vibrancy – check out lighting, candles or sun glints.

The source is immaculate, with no digital issues, it is, however, grainy, very grainy, lending an air of authenticity to its film origin, never looking out of place and, indeed, giving a rich experience.

The Dolby Atmos track is quite subtle, relying on ambience and the score to benefit from the major immersion; although the opening narration is nicely mixed, with the dialogue being spatially higher and the music being spatially lower in the room. The hotel press conference, as well as the sports fields make use of the overhead channels allowing more separation and a greater sense of immersion, while the dialogue is natural, dominated by the frontal array but given nice directionality when required.

Bass is limited, due to the nature of the film, but is tight and held firm. Surround effects are numerous; the office clatter of computers and chatter, or restaurant ambience, etc., work well, as well as more obvious tricks; Tidwell walking off camera towards the screen, his dialogue then coming from the rears, for example. In all, it’s not dynamite but the surround field is expansive and natural sounding.

Here’s the Thing Podcast – Hosted by Alec Baldwin, and is entitled The Fast Times and Long Career of Cameron Crowe.

Behind the Scenes at the Video Commentary

The Making of Jerry Maguire

"My First Commercial" by Rod Tidwell

Drew Rosenhaus: "How to Be a Sports Agent"

Jerry Maguire, even in 1996 was not an original idea, with the notion of the romantic comedy having a genre for years. It does win out though with the talent both behind and in front of the camera making the story of a cynic finding humility and love, a moving and emotive experience; every inch the classic it deserves to be.

The set as a whole is absolutely stunning

This 4K UHD is only available as part of the Columbia Classics box set. It has been newly remastered and is in native 4K with Dolby Atmos sound; the picture is filmic in nature, well coloured with terrific blacks, while the sound is natural with good effects and separation. There is one new extra on the UHD, the rest have been previously available but are all encompassing. The set as a whole is absolutely stunning and a must have.

Back to the Future Part II 4K Blu-ray Review

Back to the Future 4K Blu-ray Review