Escapism and fantasy at its best. 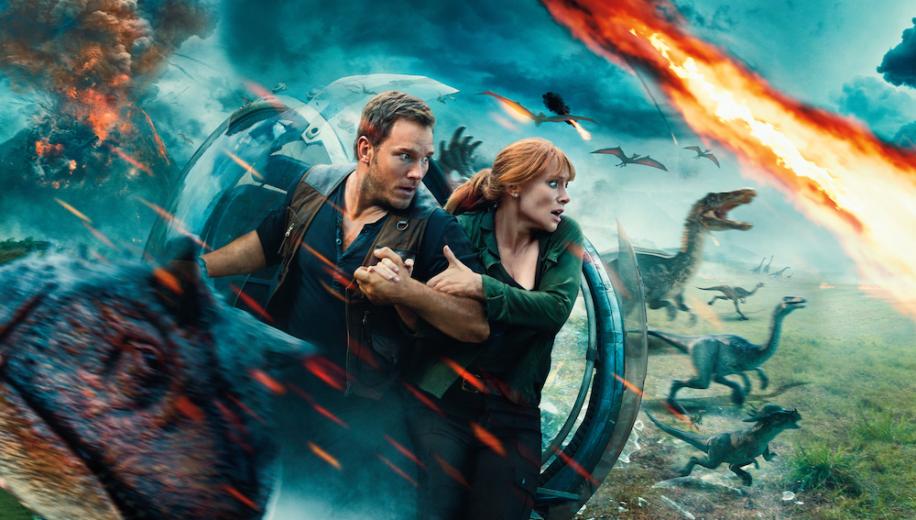 There is a formula at work here, but it’s one that is sure to please audiences and leave them wanting more.

Jurassic World(2015) saw scientists once again attempting to meddle with the fabric of life and rich corporate types trying to make a buck or two from a theme park with the once extinct dinosaurs as the main attraction. Suffice to say nature cannot be kept down and, once again, the park caused mayhem and destruction which resulted in the dinosaurs claiming Isla Nubla as their stomping ground.

Now, director J. A. Bayona picks up where Colin Trevorrow left off in the second instalment of the renewed franchise adding in some delightful touches, perhaps reminiscent of his work on The Orphanage and some wonderful nods to the very first Jurassic Parkfrom way back in 1993.


A film where you can sit back and be swept away into a world where dinosaurs walk the Earth.

The island just off of Costa Rica which has now become home to the prehistoric beasts is under threat from an erupting volcano that could once again make all dinosaurs extinct. With government officials and animal rights activists debating and protesting the conservation of the animals, we’re once again introduced to Claire Dearing (Bryce Dallas Howard) who’s now taken to standing up for the preservation of the dinosaurs.

With the help of super wealthy Benjamin Lockwood (James Cromwell), once the partner of John Hammond, and his young assistant type Eli Mills (Rafe Spall), the dinos are given the lifeline they so desperately need in the form of an island sanctuary free from cages where they can once again roam free like they did so many thousands of years before. But in order to procure the critters the help of Owen Grady (Chris Pratt) is needed, especially when it comes to Blue, who’s a very clever girl indeed (the clips of Grady training the baby Velociraptors is too adorable for words).

Once back on the island Claire and Owen, along with paleo-veterinarian Zia Rodriguez (Daniella Pineda) and computer whizz kid Franklin (Justice Smith) and a heap of military personnel, set about locating the various species, but as you can imagine things don’t quite go according to plan. After a close call with an erupting volcano and narrowly escaping a stampede of fleeing dinosaurs, Claire and Owen find themselves back within the Lockwood estate and are finally privy to what the ‘real’ rescue mission was for. Cue seedy foreign business men, an illegal auction and the latest in dino-engineering: the Indoraptor. There is so much packed into the just over two hours running time of this film that it almost certainly requires a second viewing. It’s set equally between the now dilapidated and overgrown Jurassic World park and the huge gothic mansion of Lockwood which makes for a nice juxtaposition between the huge open space of the park and the cramped, winding hallways of the mansion.

The story line is pretty straightforward and probably a little bit predictable in places, but even still it remains entirely enjoyable to watch throughout with enough new-ness to keep it feeling fresh. The musical score by Michael Giacchino perfectly complements the action on screen and amplifies certain emotional moments (and the music by John Williams still manages to give me goosebumps).

It looks and feels like Bayona had fun making this film, especially when it gets to the second half where the creepy mansion and his play with shadows is used to heighten the tension. Bayona’s also added in plenty of nods to the very first Jurassic Park film which I thought was a nice touch and didn’t ever feel like it was retreading old ground but more taking inspiration from.

The script is well handled by Trevorrow and Derek Connolly and doesn’t over complicate things but successfully plays up each of the actor/character strengths throughout. There are little narrative threads woven into the main story which add a bit of depth, but also function to punctuate the issue at the heart of the film surrounding the question of meddling with Mother Nature.

The casting for the film was spot on throughout. Pratt has such a likeable, good-guy quality which makes him perfect for the wise-cracking, sarcastic Owen. The chemistry between Pratt and Howard is such a good combination with her playing serious to his playfulness.

In smaller, but no less significant roles are Justice Smith who does geeky and cautious superbly; Daniella Pinedawho does strong-willed and cool down to a tee and Ted Levine as the military, big game hunting machismo guy, who is instantly ‘that’ guy but he does it well. It wouldn’t be complete without a young child who runs the risk of being a light snack for whatever beast is encountered, and this comes from Isabella Sermon as Maisie Lockwood, Lockwood’s beloved granddaughter. Oh, and of course not forgetting Mr Jeff Goldblum who makes a return, albeit briefly, as Ian Malcolm to forewarn us of the meddling and it’s consequences.

Jurassic World: Fallen Kingdom is fun, pure and simple. It may have moments of predictability, and maybe one small plot hole, but it doesn’t detract from the fact that it is a film where you can sit back and be swept away into a world where dinosaurs walk the Earth. Leaving the cinema I felt like my seven year old self having just seen Jurassic Park for the first time. It’s escapism and fantasy at its best.

The Trial of the Chicago 7 (Netflix) Movie Review