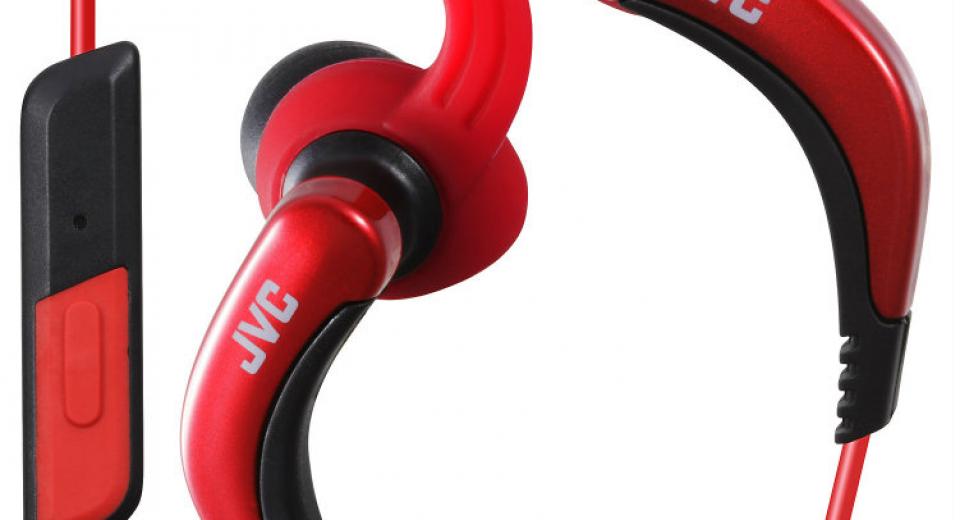 In the ongoing boom in headphone sales, the divide on what is considered an 'earphone role' and a 'headphone role' has become a little more blurred. I never fail to be surprised by the size of some headphones that people use on the move and equally the ultra high end earphone market continues to tick along nicely and sees people using earphones in setups and contexts where you'd have never imagined doing so.

One area where the earphone has kept a certain degree of dominance is in the sport and exercise accessory category. From the moment that earphones became commonly available they were enthusiastically seized upon by people that wanted the least amount of mass and equipment with them when running or the like. Recent innovations have included making sport models waterproof which makes them more sweat resistant and technically something you could take swimming although the mind boggles slightly at that one. JVC has been active in this category for some years and the latest model lineup has an entire sport category. The HA-ETR40 is midway up this considerable lineup and has a variety of features to keep a budding athlete happy.

There is a small problem with this though. I am not entirely inactive- I like walking around and the like but I don't do anything that challenges the abilities of a normal earphone, let alone a sport one. As a result, I drafted in the expertise of a friend of mine who actually visits the gym to see what the JVC does when used in more energetic circumstances. I then went about testing the HA-ETR40 in my usual rather sedentary way. Sports orientated or not, the JVC has to function first and foremost as a pair of earphones and perhaps unsurprisingly given their fairly low price, they are built around a pair of dynamic drivers, one in each enclosure and measuring just over a centimetre across. These are then placed in housings that are themselves relatively small but seem larger than they are for two reasons.

The first of these is that the driver housing is attached to a large curved assembly before moving onto the cable. The function of this is not completely clear. It isn't hollow so doesn't add to the volume of the housing and really just seems to be a piece of styling that prevents the cable having to join the driver housing directly and provide a place where a JVC logo can be placed with a bit of elegance on the side.

The second protuberance (a word I've been longing to use in a review context) is more interesting and more useful. This takes the form of a deformable rubber horn that sits in the inner ear section and keeps the ETR-40 in place when you move about. This is a bit of a mixed bag in results terms. I found it works rather well but I appear to have completely 'normal' ears (perhaps the only aspect of me that is). My fitness correspondent did not feel that they were as effective for her. This being said, the JVC is perfectly capable of staying put in an ear when you move around or shake your head. The 'sport' aspect of the ETR-40 really starts to put in an appearance with the fact that the JVC is entirely water resistant. This means that sweat isn't an issue and neither is hosing them down afterwards. Technically you could swim with them too but I'm not sure how well that would work in practise. Neither is JVC done there. The ETR-40 has a break in the cable that allows for the cord to be used with an arm mounted Apple product or similar with less cord flailing around and potentially getting in the way. The upper cord has a one button remote and mic on it to allow for easier control on the move.

Another part of the sport functionality is more interesting. The JVC is designed to allow noise in to ensure that while out jogging in public the risk of you being flattened by a vehicle you never heard is reduced. From an audio perspective, this does put the ETR-40 at something of a disadvantage but it is hard to argue with the logic of doing this for safety reasons.

The overall build and finish of the ETR-40 is perfectly acceptable for the asking price. I don't think that they trouble the SoundMagic E30 or Shure SE112 but these models don't have to make the design and material choices that the JVC does to work in the way JVC wants them too. I imagine that the very nature of items used in exercise means they will have a shorter life than a 'normal' earphone but there are no real signs of cost cutting in the way they are assembled. I went about testing the JVC in the same way I test all earphones. I used a Lenovo T530 ThinkPad running Foobar and used it with and without a Cambridge Audio DacMagic XS and a Chord Hugo- that's right, I tested a £35 pair of earphones with a £1,400 preamp as it still offers the best absolute judge of performance. It was then tested with a Motorola Moto X 2014 and iPad 3 for use on the move. Material included lossless and high res FLAC, Tidal and on demand video services.

The sport testing was carried out on two evenings of gym work by my friend using an iPod Nano and a collection of MP3s assembled over the years- much more the arrangement of a normal member of the human race and not me.

Sound quality in normal use? The JVC has a few advantages that help it work well as an affordable earphone. It is usefully sensitive and needs very little power to reach decent listening levels. The tonal balance is also fairly flat when judged by the standards of some of the competition which means that the ETR-40 is capable of producing a performance that bears a fair resemblance to the actual recording. It is perfectly possible to listen to and enjoy the HA-ET40 as a means of listening to music.

There are some less desirable facets though. The ETR-40 has a tendency to harden up at high levels and does so quite quickly and aggressively. This is separate to the performance of the headphone amp as even with the Hugo in use- a product that only generates any level of harshness at earbleeding levels- it still started to sound rather ragged at higher levels. Compared to the staggeringly well sorted Shure SE112, the JVC has a much narrower comfort zone.

The catch for the JVC is that the other performance issue is one of its own making. The design decision to let the JVC leak noise in is undoubtedly good for preventing squashed joggers but it is entirely unsuccessful at ensuring that they generate meaningful bass. The ETR-40 leaks low end energy and no amount of faffing or switching to the 'closed' bungs seems to be able to restore this. If you want to enjoy the Prodigy's latest effort at high levels and with meaningful impact, this is probably not the earphone for you unless of course, you are looking at it for exercise. In some ways, the design of the JVC does extremely well in its intended environment but things still aren't perfect here either. Being both female and therefore possessed of a smaller ear than me and also one that has an inner lobe piercing, my friend found the ETR-40 was fairly comfortable but still started to feel a little awkward after an hour or so. In complete fairness to JVC, no earphone at any price has ever been truly comfortable for her though. The rubber horn arrangement worked well at keeping the earbuds in place.

She was also very complimentary about the right angled jack at the end of the cable which manages to avoid snagging on clothes. She was less enthused about the relative lengths of the cables though. If you aren't using a player on an armband, the upper section of the cable is too short for use anywhere else. If you then attach the lower section though, there is a rather problematic additional loop of cable that you have to do something with while exercising.

The biggest issue for her was once again the very limited bass response. The gym is an environment where you want more aggressive noise isolation and the JVC struggled to deliver this and the meaningful low end extension that gives the thousands of random workout playlists on Spotify et al the required oomph. The rubber horn arrangement worked well at keeping the earbuds in place.

There is little real purpose to comparing the JVC to the star performers at this price point because neither of them is designed to be washed after use or stay put under heavy exertion (although it must be said that neither the Shure SE112 or SoundMagic E30 are exactly poor in this regard). Judged by the specialised nature of the design, the JVC does a fair job of keeping pace with the class leaders provided that you use them within their operating limits. The catch is that these limits are narrower than is ideal.

If the ETR-40 was a viceless partner for exercise this would be easier to deal with but it has some annoying limitations here too. The main one is that while the sound venting is a good safety feature it would be more helpful if this was properly nullified by the closed bungs and could be eliminated when not required. As it is, the HA-ETR40 might be ideal for those that jog on public roads but for use in other situations, it faces some very stiff competition.