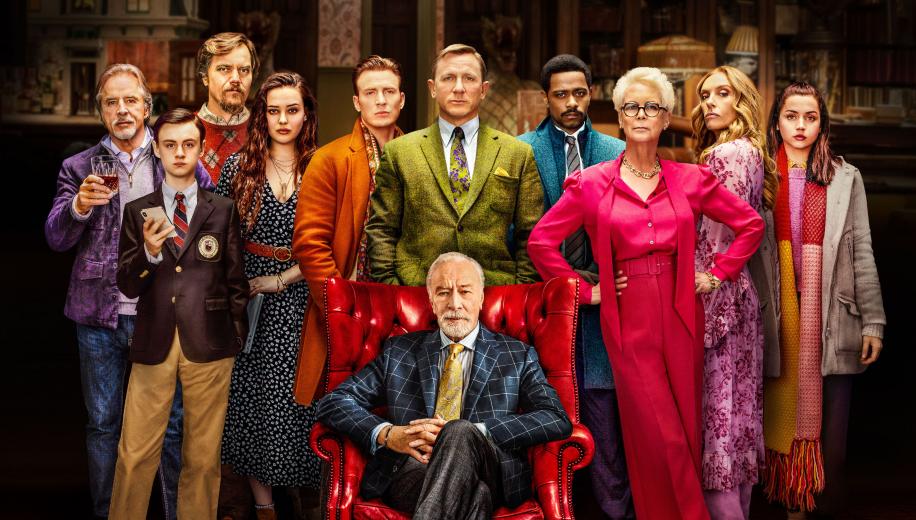 It must have been easier to fool audiences in decades gone past - it's why Orson Welles' radio reading of The War of the Worlds proved so unexpectedly effective - but modern generations don't even have to read detective novels to be fully armed with the tools needed to be the best backseat detective: a steady diet of background Murder She Wrote, Morse, Poirot and then a decade of CSI should be enough to immunise any viewer to even the most elaborate forms of trickery and subterfuge. You don't need to rely on your little grey cells; you just need to be able to read a modern movie narrative.

So it's quite refreshing to be kept guessing so admirably, and - if nothing else - writer/director Rian Johnson's modern throwback whodunnit does just that, affording quirky, eccentric characters, an atypical detective, a nice female protagonist (/suspect?) and a series of twists and turns that will leave even the most hardened cynic at least mildly diverted on the path to the answer. It's not particularly novel, nor does it break the mould, but Knives Out is a decent Friday night's entertainment.


It's refreshing to be kept guessing, and - if nothing else - Johnson's whodunnit does just that

When wealthy crime novelist Harlan Thornsby is found dead, purportedly having slashed his own throat, the family gather together to be interviewed by the police, who bring in a rather unusual consultant - private detective Benoit Blanc - to help put together the pieces of this mystery. Falling under the spotlight are all of the children, unsurprisingly each given their own potential motives for wanting the Godfather of the family dead, as well as Harlan's young nurse Marta, who appears particularly devastated by the death.


Before the controversy that was The Last Jedi, Johnson had cut his teeth on unusual modern noir with the excellent Joseph Gordon-Levitt mystery, Brick, reuniting with the actor for his third feature, Looper, and then planning on following that up with another murder mystery - an idea he'd come up with during Brick, and one which quite clearly appears heavily influenced by Agatha Christie but also distinctly self-aware in that respect too, trading some fine wit that never undermines the core story, but instead merely flavours the murder caper.

Of course, now Johnson is "the director who ruined Star Wars", which is an unfair title in many respects, not least due to the fact that the man clearly can put together a decent twisty-turny narrative (Brick and Looper both speak to that). Hopefully Knives Out will be a nice clean start for the guy, commanding an ensemble cast and - if rumours are to be believed - possibly even giving star Daniel Craig a new franchise to get his teeth into after next year's final, final death of his Bond tour.


It's not particularly novel, nor does it break the mould, but Knives Out is a decent Friday night's entertainment

Somewhat ironically, despite being a highly colourful character (yes, the accent takes a bit of getting used to, but he keeps it up, and eventually all it makes you do is long for another Dave Robicheaux movie after Heaven's Prisoners and In the Electric Mist), Daniel Craig is frequently either outclassed or overshadowed by his cast who are either more impressive, or more eccentric, respectively. Christopher Plummer commits to the former, and is absolutely superb as the rich victim at the centre of it all; Jamie Lee Curtis, after a great return to Halloween, is clearly enjoying something of a low-level comeback; Don Johnson brings his usual seasoning to the mix, which is welcome in everything from Watchmen to Cold in July; Michael Shannon is underused but effective, even if he's basically a less played-for-laughs Dwight from The Office; Toni Collette is suitably vacuous; and Chris Evans makes the most of what feels like little more than an extended cameo. And, when all is said and done, Ana de Armas' innocuous nurse with a 'gift' when it comes to telling lies, absolutely steals the limelight, adding her own layer of 'reality' to the flashback proceedings.

Johnson doesn't break the rule book, and has cited everything from Christie to Gosford Park, to a bunch of spoof murder mysteries as inspiration - all of which fit the bill here. Knives Out never succumbs to parody but is pleasantly self-aware nonetheless, and Johnson has done well to refresh a tired sub-genre with such quirk and verve. I'm not sure Craig's quite earned himself a franchise here, but if Johnson puts together another star-studded story for Craig's only-slightly-less-bumbling-than-the-detectives-he-mocks sleuth to walk us through, then it certainly wouldn't be unwelcome.