"Long ago, the world was full of wonder. It was adventurous. It was exciting. And most of all, there was magic..." 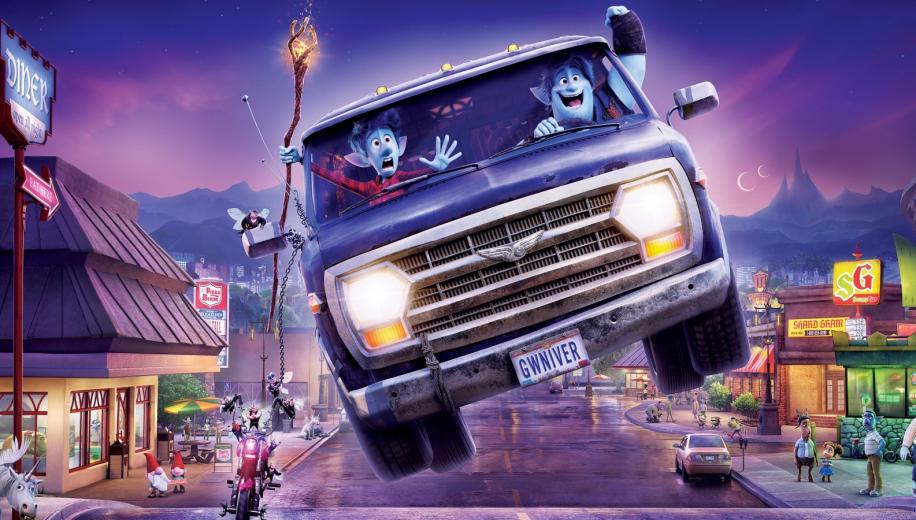 If any film studio has managed to successfully bottle lightning, it is Disney, whose Pixar arm continues to deliver consistently engaging movies for children, which also thoroughly enthral adults and - more often than not - bring them to tears. From the Coco grandmother relationship to the Lion King-esque moment in The Good Dinosaur, grown ups - and, of course, in particular, parents, get hit hard by these outings. And whilst Onward ostensible rock role-playing sensibilities might throw the scent off, it doesn't take long to realise that you're in for a heartbreaking ride as two elf brothers go to the ends of the earth to try and get one last moment with their late father.

It's got a hell of a lot of heart, and dads across the country will find it hard to hold those tears back in the final few scenes

Onward hits some superb notes, enjoying a great double-lead in Spider-Man's Tom Holland and Guardians of the Galaxy's Chris Pratt, who voice the brothers (and, occasionally, almost look like them) that go on this journey, with Pratt in particular afforded the opportunity to let rip and go full Jack Black in the role. The humour is excellent, and the social observations are on-point (particularly as Holland's awkward elf tries to invite some classmates to his birthday party), whilst biker pixies, a raging Mantacore (easily Octavia Spencer's most fun role) and a kick-ass single mum keep you on your toes as to just what to expect next. The story may not be an obvious contender for traditional Disney/Pixar magic, and the end result might not be remembered as one of their all-time classics, but it's still got a hell of a lot of heart, and dads across the country will find it hard to hold those tears back in the final few scenes, which is that trademark secret sauce that the company have quite clearly bottled.

Onward stuns with immaculate detail, from the texturing of the characters' hair, to the clothing weaves, and the background nuances. Clarity is razor-sharp, topping the already faultless 1080p Blu-ray presentation courtesy of that native 4K source, which gives it the extra edge here, leaving the image frequently jaw-dropping, even when you'd least expect it.

Of course HDR and WCG make all the difference, doing the heavy lifting and impressing even without any added Dolby Vision or HDR10+ enhancement, pulling some unsurprisingly striking tones out of basically anything magical, as the blue/purple energy tones not only glow and cascade across the screen but light up the characters' faces and the backgrounds. It's also subtly employed too, making night driving - streetlights and car lights - curiously realistic for an animation, but also allowing the more extravagant setpieces to explode into colourful fury. Black levels are inky and bottomless, but never impinge upon your ability to see the characters clearly, instead providing the perfect background to this largely perfect presentation.
﻿

Onward also enjoys a superb High Definition 3D object-based immersive audio track in the form of Dolby Atmos, which frequently goes rock-tastic for some fun setpieces, whilst providing an energetic, engaging and engulfing background to the proceedings.

Dialogue maintains clarity largely across the frontal array, whilst effects enjoy the gruff growl of the A-Team elf-mobile, the fiery blaze caused by the Mantacore, the road-rage chaos of the biker-pixie attack and the epic magic-infused conclusion, with all the 'magical' moments gifted some suitable energy for the displays of the powers. The score hits all the right notes too, knowing just when to go wild for the ride, and just when to let the emotional wave sweep over you. It's a great track, only dropping that perfect 10 score for the fact that it necessitates the now-obligatory volume-adjustment commensurate to almost every Disney Atmos track.

There's nothing on the 4K disc itself, but the accompanying Blu-rays provide a solid selection of features.

A solid selection of features

There's a Director's Commentary, a number of interesting behind the scenes Featurettes that dip behind the characters, and key moments including the epic conclusion, as well as a look at the score and a hefty quota of partly unfinished Deleted Scenes, with the disc rounded off with some trailers.

Disney/Pixar continue to impress with their diversity, with Coco's colourful and touching exploration of Dia de Muertos and now this unexpectedly heartbreaking role-playing rock-infused road-trip that is pure father/son magic.

A must-have release for Disney/Pixar fans

Disney's UK 4K Blu-ray release of Onward is absolutely spectacular, delivering utterly reference native 4K video, as well as a tremendous Atmos audio track. A decent selection of extra features round out the package as a must-have release for Disney/Pixar fans.