Putting the 'War' in Star Wars, this is the film you've been looking for 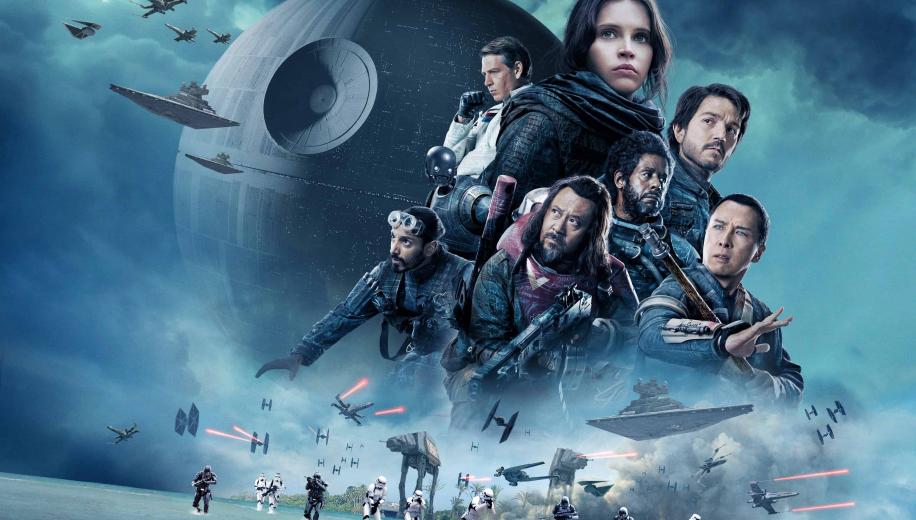 An adult Star Wars movie, and a Darth Vader, that fans have probably been waiting the best part of half a century to see, and whilst not perfect, it fits perfectly, which was more than half the battle.

Back in the 70s and 80s, George Lucas had the stories to tell, but didn't quite have the budget or effects to fully realise his vision, introducing cinema to a world of possibilities with this new-fangled Blockbuster model, and its galaxy of wonders to explore, and largely delivering on hitherto unseen grand-scale space battles. As wars go, however, the original trilogy struggled to really capture any kind of galactic conflict, dipping into it most successfully with Hoth, but losing the plot with its Ewok-assisted woodland skirmish in Return.

Decades later and Lucas would be gifted another shot at the title, and all the VFX tools to finally bring these ideas to life, unfortunately largely squandering them - never more unforgivably than in his summarising the fateful 'Clone Wars' as a by-line at the start of Episode III. For a series called 'Star Wars', it was a little surprising that there was so little actual 'War', but this franchise had always been family-friendly... until Rogue One.

Taking some element of risk with the spin-off tale (which, after all - on paper - was a story that we all knew the outcome of, which nobody was asking to be told in prequel movie format), Disney's first "A Star Wars Story" chapter was an absolutely outstanding effort that surprised everybody with its desire to stay true to the wartorn battlefront that had been so frequently alluded to in the other films, but never really depicted. Here, the Resistance were a ragtag ground of desperate con-men and criminals, with few heroes left amidst their ranks; few that didn't have the blood of innocents on their own hands, doing whatever it takes just to survive another day as the tyrannical empire chokes the galaxy with its stranglehold.

Both the first and last great modern Star Wars movie

Repurposing a classic war movie structure of anti-heroes set on an impossible suicide mission - Dirty Dozen is the obvious comparison - Rogue One takes its time to paint the decimation of this universe, now heavily occupied by troops (the Stormtroopers far-more in-line with their engineered soldier backdrop from the prequels than their clumsy cannon-fodder antics in the Original Trilogy), with the few rebels sent scurrying like rats. Even the Resistance movement are shown taking drastic steps to ensure that they are not discovered; torturing and interrogating to avoid being betrayed, making their few remaining soldiers pay the price of loyalty often in blood.

The Jedi? They're unsurprisingly nowhere to be seen in this post-The Great Purge landscape, and indeed Rogue One stands out as the only entry in the entire grand franchise to eschew both space cowboy and Jedi as main characters in favour of a more down-to-earth depiction of the evolving battlescape.

Rogue One puts together some of the most memorable and skilfully realised set pieces Star Wars has ever seen, combining the standard of VFX that the prequels largely squandered, and that the Original Trilogy didn't have, and putting them to great use for once, whether in small-scale battles (Donny Yen's an inspired blind samurai choice, getting some great against-the-odds moments), the land assaults (AT-ACTs tearing up the beachfront, as X-Wing fighters try and give the ground troops support? It doesn't get any better than this. Even the space sequences are absolutely spectacular, as they desperately try and get through the shield defences.

And Vader? He's so impossibly scary and jaw-droppingly powerful in this sequence that it'll make it hard to take the OT Vader seriously after seeing him full force unleashed here, the way he always should have always been. Rogue One finally put the war into Star Wars, and it's only a shame that - aside from perhaps The Mandalorian - it had very little impact on the course of the grander sequel 'trilogy', leaving this both the first and last great modern Star Wars movie.

Rogue One: A Star Wars Story comes to US 4K Ultra HD Blu-ray in advance of even an announcement over a UK equivalent; a shameful omission from the opportunity to provide a complete Star Wars collection with the recent lavish 'Skywalker Collection' and a glaring omission on the UK release schedule, made slightly more tolerable given the lack of region coding for UHD discs - leaving an import an easy and obvious solution to this predicament.  Shot digitally, the glorious native 4K Digital Intermediate is what forms the basis of this Ultra HD Blu-ray release.

Rogue One was shot using Ultra Panavision 70 lenses on Arri Alexa 65 large format 6K cameras, and gifted a full fat native 4K Digital Intermediate, and the results speak for themselves, elevating it to arguably the best looking of the entire expanded series (better than the remastered 4K of Star Wars, and better than the best-looking of the prequels, Revenge of the Sith, whilst competing favourably with even the latest entry, Rise of Skywalker). Stylised to reflect the wartorn environment, Gareth "Monsters" Edwards' Rogue One battlefront look is gritty and grainy, but also stunningly detailed, allowing the textures to come to the fore, with weathered clothing and scarred, dirty faces commonplace amongst the resistance. The clinical depiction of the perfected Empire is keenly juxtaposed with the down-and-dirty resistance, and there are similar wonderful clashes between the technology and the classical desert and beach settings.

Environments are fabulously realised with a more tangible, in-the-thick of it, feel, but also given an epic scale wherein the effects never falter in delivering the goods (questionable less-than-subtle reincarnations notwithstanding).

Detail is superior throughout, whilst HDR and WCG (even without the Dolby Vision that Disney has chosen to implement exclusively on their digital platform) are superbly implemented, from the glow of the X-wing engines to the shields, blasters and planet-levelling destruction on offer. Primaries pop within the otherwise dour landscape, lighting up the night sky during the mountain assault, whilst the climactic beach-front sequence boasts some fantastic visuals, from the clear blue seas to the lush green foliage, as a perfectly atypical backdrop to cast the battle against. Black levels are rich and inky, at the opposite extreme to the peak brightness afforded this presentation.

Already wowing on Disney +, Rogue One's 4K disc bests even the impressive streaming visuals - even with that aforementioned Dolby Vision enhancement - and remains arguably the pinnacle of all the 4K releases from this franchise.

Rogue One already enjoyed demo status on its Blu-ray release with a tremendous DTS-HD Master Audio 7.1 track that more than delivered the goods, however, the Dolby Atmos upgrade on their 4K release, notwithstanding the now-frustratingly-familiar volume tweakage required to bring Disney titles up to 'reference level', is outstanding. The 3D Hi-Def object-based immersive audio track brings an extra dimension to the audio, expanding the battle action out across your array and implementing some impressive discrete elements from specific weapons fire to booming explosive shockwaves.

The Dolby Atmos upgrade is outstanding

Dialogue is rendered clearly and coherently throughout, afforded priority across the frontal array throughout, even in the thick of the battle, whilst Michael Giacchino's (Mission: Impossible - Ghost Protocol, Spider-Man: Far From Home) excellent score perfectly captures the feel of this desperately doomed mission, and the dirty fight against the Empire, getting keen resonance across the array, and providing an excellent backdrop to the film's major set pieces. Of course, you really came here for war, and that's what you get, with the beachfront assault, space-based action and even the more personal skirmishes given epic expanse on the surrounds, whilst the LFE channel underpins the whole affair with guttural bass-laden impact. Sure, it'll need you to dial it up to 11, but when you get there, the results are excellent.
﻿

As per all of the Star Wars 4K releases thus far, without exception, Rogue One's 4K disc itself is absolutely bare bones, and unfortunately all of the old extras - on the accompanying Blu-ray - are not added to with any new stuff here.

The 4K disc itself is absolutely bare bones

The Blu-ray's slew of mini-Featurettes takes a broad-stroke approach to covering all the bases behind this production, affording a look at the premise, story and director; the characters and casting of Jyn, Cassian, the Droids, the Guardians, the Revolutionary, and the Empire's villains; the 1977 stylisation behind Rogue One, to integrate it with A New Hope, the digital resurrections, and the reactions to the finished film.

Rogue One: A Star Wars Story is a relatively rare Star Wars film - namely one that is neither particularly divisive nor universally derided, sitting up there with Empire as one of the great entries in the expanded franchise, and proving easily the best of the modern efforts.

One of the great entries in the franchise

Disney's 4K Ultra HD Blu-ray release of Rogue One: A Star Wars Story is, rather disappointingly, not currently on the UK roster, and was not a part of the recent, highly anticipated Star Wars 4K Collection, dubbed the Skywalker Collection to allow Disney the excuse to extract further cash out of fans just to complete their actual collection. Thankfully, 4K discs have no region restrictions, so picking up this US disc really is a no-brainer, with arguably a contender for the best native 4K video and Atmos accompaniment of all of the Star Wars films recently released on the format, it is absolutely unmissable.