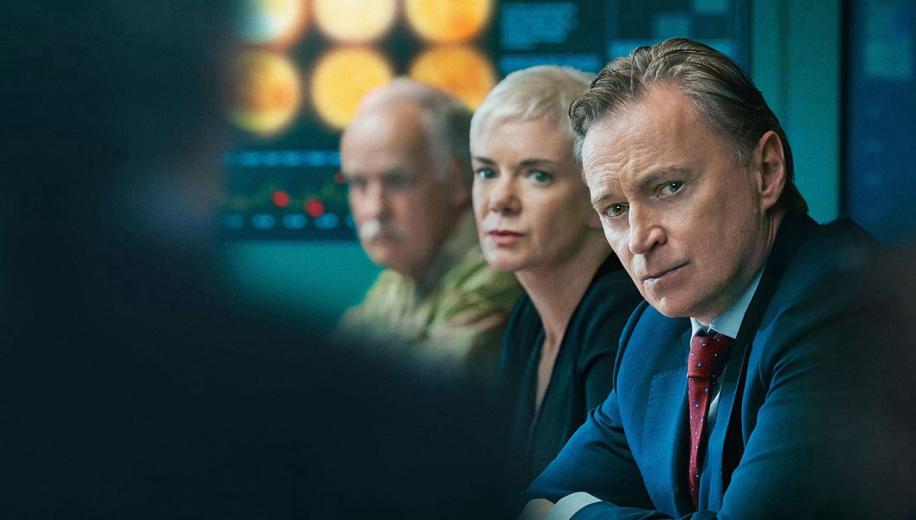 A show which would have probably been celebrated as an impressive feat for the BBC or ITV to pull off, Cobra is somehow a little less impressive on Sky, neither quite fitting their bill for slick US productions nor wielding all that much Brit grit. It's a generally well put together miniseries, which benefits from Sky's additional budget when it comes to some of the more grand sequences (although the first episode's effects clearly blew the budget for the entire series, as there's little more that isn't practically staged), and is clean and stylish, boasting a strong Brit cast who commit to their roles, however thinly painted they are.

When a solar flare threatens to cause massive, catastrophic disruption to the country, the PM convenes ongoing COBRA meetings to address the potential disasters - most prominently, widespread power outages - which eventually spark civil unrest, looting, political upheaval, and paramilitary movement. To make matters worse, the PM's daughter is in her own mess with personal drug use, his outdated Home Secretary is plotting a coup, and his most trusted Chief of Staff may have been compromised, and she doesn't even know it. It's going to be a long time before order is restored and the country is put back on track, but will the beleaguered PM be able to see it through to the end?


Cobra stands for the far less impressive 'Cabinet Office Briefing Room A', but it gets the job done as a punchy title for this political drama, which opens with a UK TV-scale take on the kind of disaster you'd see in an Emmerich blockbuster, as solar flares disrupt flights and shut down power across the country. It's subsequent 'disasters', however, remain largely generated by fallout - some well conceived, most utterly contrived, and all pretty much par for the course if you've ever seen an episode of the Kiefer Sutherland production Designated Survivor.

Indeed, in some misguided attempt to give it more depth, there's back-story overkill here, with soap trauma abounding in the background - from the PM's own daughter (who could rival 24's Kim Bauer) to a political player in bed with a foreign spy, a character who appears to have been drafted in just to spout agenda-speak, an older weasel-pimp who seems to want to bring the whole show down for no other reason beyond someone has to be on moustache-twirling duty, and the rather incredulous rise of armed militia who overrun the police force equally implausibly, armed with a single double-barrelled sawn-off. Whilst some rioting is expected, the plotting here just doesn't fly in a country as small as the UK - it's like they wrote it for the US (or just repurposed it from three seasons of Designated Survivor) and assumed it would be an easy fit in the UK. It isn't. Just as bad is the racial contingent, where neo-nazis rise up like the Fourth Reich, and it would seem that nobody on the streets is minded to stop them.

Despite all of this, Robert Carlyle somehow stands out from the crowd (well-partnered with Victoria Hamilton's tough-as-nails Chief of Staff), embracing the PM position but also eventually devolving into more traditional Carylye-ism, as he f-bombs his way through meetings, often looking like he's going to glass anybody who annoys him (and there are plenty of idiots who rear their heads during the country's time of national disaster, so you can't really blame him for losing it). He's still a joy to watch, particularly unleashed, and whilst it gives the show about as much credibility as Martin Shaw's defendant-punching Judge John Deed, or, back in the day, Clint Eastwood's Magnum-toting Dirty Harry, it dials up the entertainment factor to 11, which arguably is the show's only saving grace.

Ultimately proving pretty damn flimsy - they stretch things out way beyond breaking point, even in a 6-episode run - Cobra isn't going to leave audiences itching for a second season, and doesn't really do enough of anything to justify its existence. It's neither bitingly scripted like West Wing, nor superbly-plotted like Homeland (or even the considerably better UK vehicle Spooks, albeit in its nascent seasons), and it actually isn't even as wide-ranging as Designated Survivor, instead often feeling like a mini-season of 24, only without Jack Bauer, and held almost entirely from within the confines of CTU. Even with Begbie itching to burst out, Carlyle can't save that.