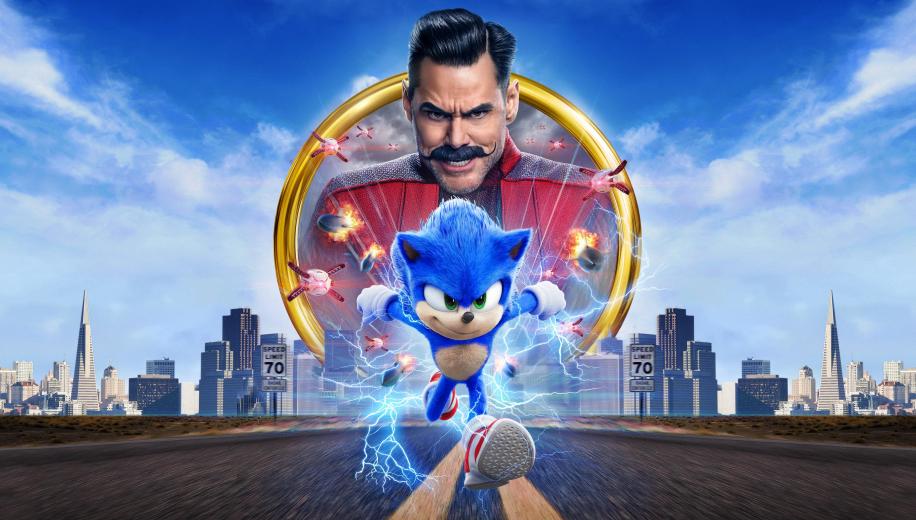 Sonic gets a big screen makeover in this energetic romp, which is a little like a PG Quicksilver solo movie, with Jim Carrey having the most fun with a character he's had since the 90s.

Adapting the massively popular Sega video game character Sonic into a movie - and now a movie franchise after the sequel was recently greenlit - must have been a tough ask, given the relatively limited scope established by the games themselves, however, somehow Jeff Fowler, making his directorial debut no less, has put together a suitably frantic action adventure with more than a little comedy (often courtesy of an on-form Carrey), some heart and plenty of inventive setpieces - all revolving around a blue CG hedgehog who is really fast.

Sonic the Hedgehog shoots for something of a road movie, as the supercharged foreigner finds himself in the sights of a dastardly tech genius - Dr. Robotnik - who makes it his mission in life to capture the furry fastball, leaving Sonic forming an unlikely bond with a well-meaning local sheriff, who aids him in his tearing-across-the-country mission to get his magical rings back so he can escape not only Robotnik but the whole planet.

The behind the scenes production woes on Sonic are barely evident in the end result, other than in a good way (it spent years in production, passing from Sony to Paramount, and almost landing with a very different looking Sonic until fans balked at the teaser and the film was delayed 6 months to redesign Sonic completely), and the subsequent Box Office popularity probably shows that it was worth going the extra mile. The narrative has enough heart to keep you invested, whilst the main setpieces rely on the now-trademark Quicksilver-effect which leaves several key sequences impressive, inventive and pretty damn funny. And Carrey? He's having an absolute blast going full snarkasm for the part. It has no right to be this enjoyable, really, providing a solid night's entertainment for the whole family.

Shot at resolutions just under the 4K DI that it's been finished with, Sonic still makes a healthy upgrade on the format, drawing out more detail from the fairly busy on-screen action, with seamless effects and some superb "Quicksilver" setpieces that look tremendous. Skin textures, Carrey's distinctive haircut and moustache, clothing weaves and screen-littering tech (a la Spider-Man: Far From Home) all look superb, with no signs of softness or drops in clarity.

Of course, HDR and WCG, along with the added enhancement of Dolby Vision, make all the difference, bringing that added vibrance to Sonic's distinctive blue fur, allowing the tech to glow with energy-fuelled orange, or pop with rich laser red, whilst Sonic's electric energy surges blue-white in intensity. Black levels are deep and inky and round out an excellent presentation.
﻿

Sonic the Hedgehog's Dolby Atmos track is unsurprisingly superb too, bringing home all the energy and chaos - as well as fun song tracks - that you'd expect from a decent 3D object-based high-definition immersive audio mix, particularly for a CG-dominated action-adventure based on a video game character who runs really fast.

Dialogue remains clear and coherent, rising above the proceedings, and enjoying prioritisation for all the key players, despite how chaotic it can get, whilst the score buzzes along in an effective but generic fashion, fuelling the array, and driven by some great song tracks that liven up the key "Quicksilver" moments. Effects are expansive, with the visually busy screen served by a very effective soundscape that sees drones whizzing around your living room - as well as Sonic himself of course - and is underpinned by some welcome LFE input. It's a great track.
﻿

The 4K disc is bare bones but the accompanying Blu-ray has a healthy set of extras that cover all the bases.

A healthy set of extras

Headlined by an excellent Commentary from the director (and, somewhat disconcertingly, Sonic himself - or at least the actor who voices him), there are a few short Featurettes (mostly focussed on Carrey's performance - and quite rightly so), a slew of Deleted Scenes and Bloopers and a Music Video.

Sonic the Hedgehog is a pretty decent bit of family entertainment, transforming the threadbare video game concept into a decent origin story for the Quicksilver-ish character, with plenty of inventive action and some great humour mostly thanks to Jim Carrey.

It has no right to be this enjoyable, really, providing a solid night's entertainment for the whole family