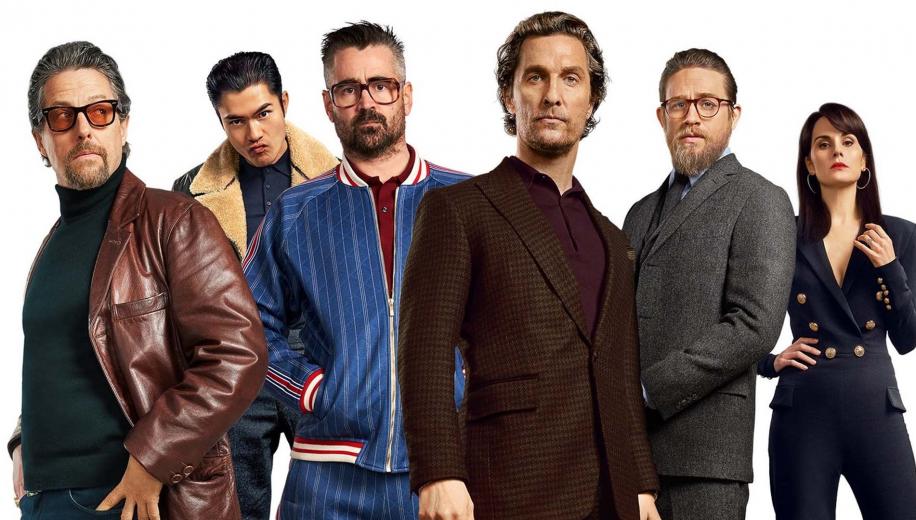 Guy Ritchie's latest is less Lock Stock and more Knives Out; a gangster whodunit that's not quite as clever as it thinks it is, but is a perfectly engaging crime flick.

Ritchie has quite competently made the transition from relatively low budget but stylish Brit gangster flicks to Hollywood blockbusters over the course of the past two decades, with even his Man from UNCLE adaptation, whilst a Box Office flop, nonetheless a solid and perhaps even underrated updating of the source series, and his popular Sherlock Holmes outings wonderfully engaging (here's hoping that a third is finally actually going to be made). King Arthur was a mess, but still entertaining in a way that - for example - the recent Robin Hood 'revision' just couldn't lay claim too, and his live action Aladdin was also surprisingly good. Now, after possibly his least 'Guy Ritchie' movie, he goes back to what he started with - gangsters in London - bringing some Hollywood talent with him for the trip.

The Gentlemen isn't classic Ritchie, at least not in the sense of Lock Stock and Snatch, but they were a product of a time long gone, and it's altogether harder to pull the same wise-ass, too-smart-for-the-viewer trickery you would maybe get away with twenty years ago. These days audiences are too savvy, and it is hard to do something new - look at how elaborate Rian Johnson's Knives Out had to be in order to even slightly keep you guessing - particularly in this genre. To that end, Ritchie does well to revisit his old stomping ground and do so with a modicum of novelty to at least some of the ideas, attempting to bring a little self-awareness to the fable (the story-within-a-story from Hugh Grant's hugely over-the-top 'storyteller' mostly works) and occasionally spinning things off thoroughly unpredictably (Colin Farrell absolutely steals the show, and basically provides every genuine belly laugh in the entire affair) as it tells what should be a predictable tale given how damn well-trodden this territory is.

It's altogether harder to pull the same wise-ass, too-smart-for-the-viewer trickery you would maybe get away with twenty years ago

He's got a solid cast, cleverly not making McConaughey's gangster the primary focus (despite being the primary focus of the 'story-within-the-story') and instead leaving the heavy lifting to the Charlie Hunnam's more interesting lieutenant, as well as Grant and Farrell as flavouring to veritably spice up the proceedings. The ostensible villains of the piece are much less interesting (although perhaps we'll never get a memorable Brick-Top again, and maybe a modern equivalent wouldn't even work) but that doesn't always matter as the key is often to find out just who is a villain.

Perhaps better viewed through the lens of an oddly effective companion-piece to Knives Out rather than another stylish, witty and smart gangster flick 'from the writer/director of Lock Stock and Snatch', expectations do need to be moderated here. This isn't classic in any sense of the word, but, with that in mind, it's never less than engaging as it weaves its unsurprisingly convoluted tale involving a colourful collection of a dozen or more characters who, somehow, by the end of it, you kind of know. Whether you care about them is another matter, but The Gentlemen keeps moving fast enough for that not to matter too much, escaping close scrutiny to provide an entertaining and engaging ride.

The Gentlemen hits UK 4K Blu-ray courtesy of Entertainment in Video, almost identical to Universal's earlier US release, at least on the video front, boasting what seems to be the same very strong native 4K presentation that forms the basis of this Ultra HD Blu-ray release.

Hardly a big budget production, The Gentlemen nonetheless looks rather dapper in native 4K, enjoying strong detail and textures on everything from facial hair to the variety of clothing on screen, retaining clarity throughout, with a fine sheen of filmic grain pervading the piece but never intruding. Settings pop to life, and whilst it is hardly overt demo material, it's generally very impressive nonetheless.

HDR and WCG complete the package and add some distance beyond the SDR 1080p Blu-ray, only popping in a couple of moments courtesy of cannabis lighting and primary-based outfits, but bringing out rich and inky blacks for the peak whites to be juxtaposed nicely against. It's hard to fault and, even if it doesn't necessary hit all the buttons to make for a reference release, it's got enough demo moments to just about edge a commensurate score.

A Dolby Atmos accompaniment would bring superb 3D Hi-Def object-based immersive audio to the fore for this lively crime caper, but the UK release ditches the US track in favour of a DTS-HD 7.1 mix, still whipping up something a storm on the soundscape as the frenzied pace sweeps you up and carries you along with your feet barely touching the ground for the entire duration.

Dialogue comes across clearly and coherently throughout, allowing you to maintain pace with the frantic dialogue and complex plotting, whilst the score keeps the tempo, engaging you where necessary and reflecting the tone as appropriate. Effects are surprisingly punchy, particularly when the heavy guns get cracked out, allowing for some decent use of the surrounds and, despite the fact that this is - much like the video - not obvious demo material, it scores enough points to be given the benefit of the doubt.
﻿

The Gentlemen's 4K disc is bare bones, however, its Blu-ray counterpart contains a small selection of very short extra features which barely get started before they end.

Shockingly, the making of Featurette is little over 90 seconds in length, with a longer but more pointless summary of the best lines from the movie and a glossary of cannabis names just to add to the whimsy.

The Gentlemen is a very engaging little flick that sees Ritchie return to his wheelhouse to recapture some former glory. It may be a decade later, but it's fun nonetheless, and a diverting little crime caper.

Perhaps better viewed through the lens of an oddly effective companion-piece to Knives Out rather than another stylish, witty and smart gangster flick 'from the writer/director of Lock Stock and Snatch'

Entertainment in Video's 4K Ultra HD Blu-ray release of The Gentlemen looks to be, on the face of it, different from Universal's US 4K disc, boasting the same impressive native 4K presentation, but losing the Atmos track, with the same smattering of frivolous extra features. Ritchie fans should consider it a strong purchase, but die-hards will want to import.