It's a kinda Mazik 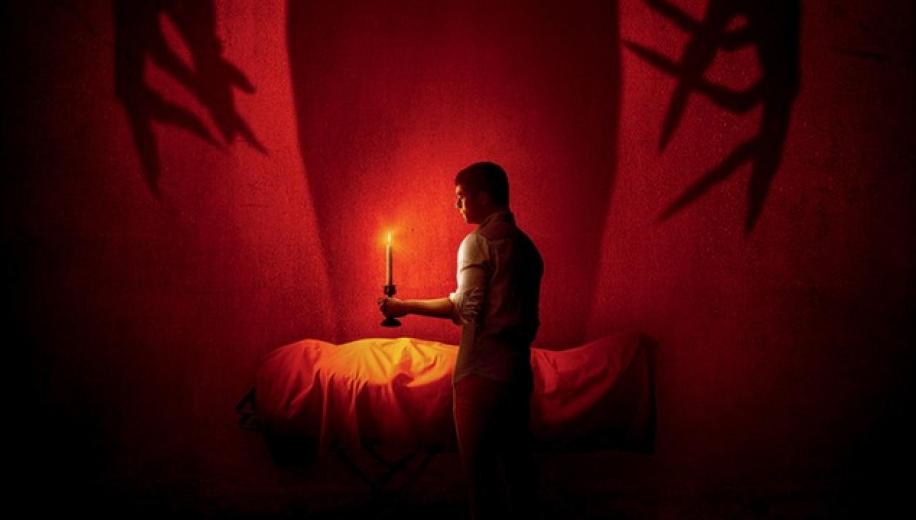 In Jewish folklore, there are the same tales of malevolent spirits present in all cultures. Demons and devils which attach themselves to people or insinuate themselves into the lives of the living through objects or places.

The most widely known, thanks to a plethora of ghost hunting shows and the absolutely bonkers 2019 horror movie Killer Sofa, is the Dybbuk. The Dybbuk is a restless spirit which may possess an individual or simply follow them causing suffering and bad fortune. Another is one which has become an affectionate term for a mischievous child: mazik, or ‘imp’. First time writer and director Keith Thomas, combines the two to create a malign spirit that enjoys toying with the person it is attached to in order to feed off their sorrows. And he does a very compelling job of it.

After his brother’s death, Yakov has left his Hasidic lifestyle behind. Unsure how to make life work in the wider community and with no workable skills or qualifications he reluctantly accepts a job offer from a Rabbi friend as a Shomer. A man in the community has recently died and there is no one able to keep watch and pray over the body, as is required in Jewish rite. Insistent that the work may restore Yakov’s faith, his friend escorts him to the house of the deceased, Ruben. The house is still occupied by Ruben’s widow, a holocaust survivor now suffering from dementia…and something else.

...uniquely anchored in its sense of tradition, culture and faith

Blumhouse has given almost free rein to another uncut talent, presumably supported by the insane success of its trashy, money-raking fare like this year’s Fantasy Island. Keith Thomas is a film maker with a background submersed in Jewish culture, even attending Rabbinical school for a time, and he brings that deep understanding of the characteristics and peculiarities of Jewish lore to his first film. The result is a film which is uniquely anchored in its sense of tradition, culture and faith.

This anchoring is the film’s most engaging aspect and allows Thomas to explore some interesting philosophies regarding individual isolation within isolated communities and inter-generational trauma. The notion that PTSD is an intrinsic part of Jewish life passed down unintentionally through the generations from the holocaust and before, living memory becoming a sort of race memory, is a compelling subject for exploration. The implication that the Mazik represents an ever present horror in the lives of Jews today, something that the older generations have lived with and are, knowingly or unknowingly, passing on to their children and grandchildren gives the story a troubling core. This is further reinforced by Yakov’s own personal trauma, which also occurred as a result of prejudicial and bigoted behaviour and demonstrates a cyclical nature to Jewish suffering.

It’s a heavy topic to grapple with but through a combination of Thomas’s use of some smart shooting techniques and Dave Davis’s performance as Yakov, the movie mostly carries it off. Thomas’s style of very shallow focus, blurring everything but a single character, hits home the isolation that Yakov feels – and that all the characters feel in some way – in a way which is subtle and effective. Davis’s body language, his awkwardness and his ability to portray emotional rawness completes the effect of being trapped and vulnerable.

As a first-time writer/director it’s neither hugely surprising nor unforgivable that there are some minor wobbles in the presentation. The score lacks consistency of tone using a mix of dance, industrial and classical elements, at one point turning what could have been a portentous moment into something unintentionally funny. The film also has an admirable devotion to ambiguity, but it sadly then tips over into being clumsy in its final moments and appears unsure what it wants it say, particularly regarding the place of both faith and medicine in psychological disorders. The use of eye imagery throughout the film is visually interesting but, personally, I couldn’t really fathom its purpose.

The Vigil has definitely marked out Keith Thomas as someone to watch.

The weakest aspect of The Vigil, sadly, is the horror itself. It’s thankfully short on BlumJumpsTM (music builds, fake out, lull, gotcha scare accompanied by loud orchestral sting - though the movie isn’t entirely free of that sort of low-rent mash) but there’s nothing in the way of scares that hasn’t been seen a hundred times before. Creaking bones, flickering fluorescent lights, a phantom phone message – to divert slightly, I would like to make a quick PSA to horror movie makers on behalf of horror movie fans: mobile phones are not scary. Trying to make them scary is a fool’s errand. Sending a scary text message is not the new “call from inside the house” – as well as a bit of videotaped exposition. Worse, the design of the Mazik itself is straight out of the Bumper Book of Blumhouse Bogeymen. All rubbery appendages and silly Cirque du Soleil movements. It barely needs saying that the more you see it, the goofier and less scary it becomes.

Despite the horror elements being almost infuriatingly cookie cutter, The Vigil has definitely marked out Keith Thomas as someone to watch. If nothing else, The Vigil shows us that he has a voice and frame of reference that is something different and curious. It also shows that he’s got his fingertips just dipping into an acuity for interesting imagery and it seems like it wouldn’t take too much of a push from the right person to get something unique out of him.