A much refined effort from Toshiba that will keep most happy 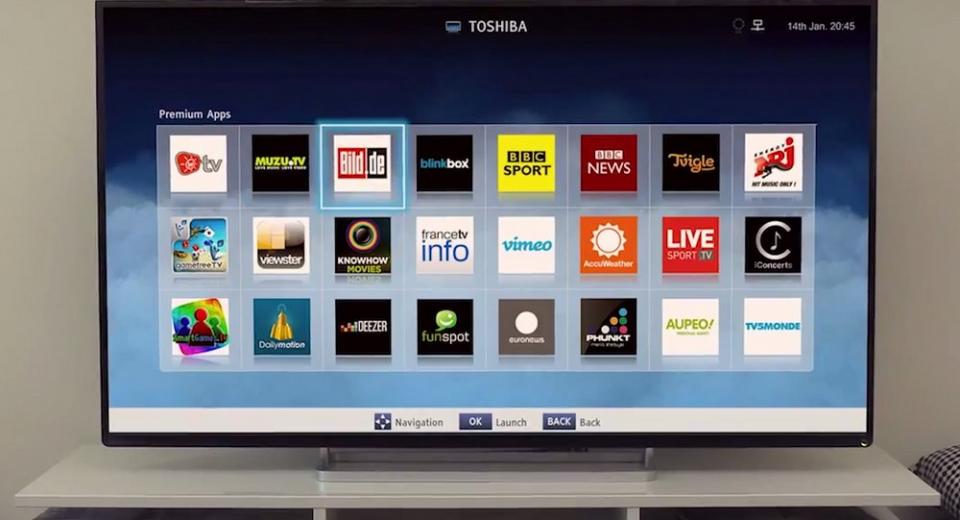 While Toshiba’s 2013 Smart TV system certainly looked the part, it was often sluggish to navigate and, as a result, frustrating to use.

The company are looking to set that right this year however and most of their range now carry beefed up processing to complement the various services on offer. The review was conducted using the impressive L74 but most of their Smart TVs carry the same set of features so we can expect a similar performance from them.

Toshiba has an awful lot of work to do if they want to compete with the current top dogs of the Smart TV market. This year has seen something new and very special with LG’s Smart+ (webOS) system and whilst we’re not expecting a match for that, it would be good to see Toshiba at least give it a run for its money.

In terms of appearance, the Smart TV Cloud Portal looks very similar to last year’s but thankfully it’s much slicker to navigate around and not plagued with the constant pauses of the 2013 platform. The Home Screen is split in to 5 categories – Games, TV & Video, Current TV, Featured Apps & Other Categories – but features a persistent set of tiles for Wireless Display, Internet, My Photos, My Videos, My Music and My TV Library that’s always placed centre-right. As well as those ever-present tiles you also get a permanent set of icons at the bottom of the screen. One shows the weather where you are; there’s also a Search facility; an icon for MediaGuide; a Support option and there’s also one for Settings. We’re not sure there is the need for five main areas and perhaps TV & Video could have been consolidated with Current TV but it’s a friendly enough interface and relatively easy to find your way around.

The aforementioned MediaGuide is a highly souped-up Electronic Programme Guide which includes a database of information on actors, TV shows and movies as well as pretty pictures and links to 'bazzillions' of TV programme descriptions, celebrity profiles, and searchable data on TV shows since 1960. Plus there’s included background information on shows and movies. If, for example, you would like to know in what other movies the actor on screen appeared in, MediaGuide can give the answer and it will even indicate if one of these movies is aired on any of the available channels within the next eight days. MediaGuide also makes suggestions for what users may find interesting, based on editorial reviews, personal preferences, keywords, categories and other parameters. One of Toshiba’s big pushes this year is for the MediaGuide Replay function, which is a TiVo-esque programme recommendation function that tracks what you watch and then suggests and records content you might like. The function is fully integrated with Freeview and Toshiba will also supply you with a specially designed external disc drive on which to dump the recordings. It goes by the rather odd product name STOR.E ALU TV KIT and has a 1TB storage capacity, interfacing with the TV via USB 3.0. With online prices of around £50 is a good alternative to a standalone PVR but given the fact all Toshiba’s TVs are only single tuner, it means that you don’t get the watch one/record another functionality that even basic recorders provide. We got one sent to test and we have to say it works very nicely in practise and the option to mount it discreetly at the back of the TV is a bonus. You also get a Remote Record option, via the mobile app, once you have gone through the process of creating a Toshiba Cloud TV account and have linked the TV to the account. This could get a bit confusing so bear with us. Toshiba’s main app for 2014 is named MediaGuide and is billed by Toshiba as being available for iOS devices only. That’s not actually true and there is an Android Version with limited device support (a load of Toshiba Tablets, Nexus 7 & 10 plus Sony Experia Z) and it seems to work equally as well on our Nexus 7 as it did on our iPad 4, which is a refreshing change for Android users who normally get the thin end of the Smart TV app wedge. As well as all the extra programme information, noted above, MediaGuide can also act as a full remote control replacement with a keypad that works in both portrait and landscape orientations. Considering we’re not huge fans of the current crop of Toshiba TV remotes, this an excellent alternative and we found the L74 responded immediately to its commands. Like the EPG on the TV screen, this one allows for channel editing, favourites and category lists and you can also assign a colour to each available genre. So, for example, Sports can be highlighted in green, whilst movies could be pink. We weren’t that keen on the idea ourselves but you can switch this behaviour off in the Settings Menu.

Android users get parity with Apple owners - if you own the right device, that is.

Each and every 2014 Smart Toshiba TVs features a built-in Wi-Fi adapter that supports the IEE 802.11 a/b/g/n standards. Those that want to stream high definition video to their televisions may still be best off seeking a wired connection or, alternatively, one of the domestic powerline solutions that are capable of carrying high bandwidths more reliably. Toshiba were the World’s first manufacturer to offer for Mobile High-Definition Link (MHL), a new - proposed - industry standard for a mobile audio/video interface that directly connects smartphones and tablets to HDTVs. At the moment the mobile devices that are MHL enabled are pretty much the top of the range from the likes of HTC, LG, Sony and Samsung but support seems to be growing. Even if your Toshiba TV isn’t one of those to support MHL, there are 3rd party MHL>HDMI adapters on the market, should you crave the functionality.

You can utilise the media player functionality from the persistent set of tiles in the middle of the screen with choices of Video, Music and Photos on offer. This is another area where Toshiba has upped their Smart TV game and we had no problems streaming our test suite of MP4, MKV, divX and xVid files from both USB storage and via DLNA over the network. Your limited to .jpg and .bmp files for your photos whilst there is support for MP3, AAC, WMA, LPCM, WAV, ADPCM, WAV and OGG files for streamed audio. Toshiba was one of the first manufacturers to support WiDi, or Wireless Display technology, which is a system that allows you to stream video and audio directly between two devices. WiDi does not need to use an existing network, and requires no router and lets you send video and audio from your PC to your Toshiba TV. Of course, your PC will need to be WiDi compliant - and ours isn’t - so it’s not something we could test. Funnily enough, many Toshiba laptops are built with this feature included.

Where has Skype gone from the platform?

VoD and Other Apps

Toshiba has sensibly focussed heavily on getting plenty of video streaming services on to their Smart TV platform and we have some of the biggest hitters available here. To wit, there are apps for Netflix, YouTube and BBC iPlayer plus Vimeo and Tesco’s blinkbox service. We would like to see more of the UK catchup services – 4OD, Demand 5 and ITV Player – plus Amazon Instant and Sky’s NOW TV and STORE are becoming increasingly more influential but it’s still a decent range of services.

Other highlights include access to aupeo internet radio, Viewster and iConcerts and if you happen to be of Gallic ancestry, perhaps France 24 might be of interest. There is a much improved Web Browser at your disposal too. It is fully HTML 5 compatible and therefore a handy tool for most up-to-date websites, even playing almost all the embedded video we could find on a variety of web pages. The only problem is that navigating using the remote is very clunky, even when using ‘Mouse Emulation’ and the app doesn’t take advantage of the touchscreen capabilities of your smartphone or tablet by providing a virtual scroll pad. That’s something that needs to be addressed as its currently a good browser spoiled by a clumsy control scheme. Two things missing from last year’s platform are Woomi and Skype. We can understand the ditching of woomi with its rather bizarre concoction of soft porn and niche interest services but we’re a bit puzzled at the omission of Skype as it’s become a staple of almost every Smart TV platform out there and an excuse to sell you a mic/camera USB peripheral. We can only guess that the licencing costs outweighed that of the income for the attachment, in Toshiba’s case, but we’ve contacted them for their reasoning on this. It’s not something we use on a daily basis but it is a nice to have and a sensible extension of the Smart TV idea.

HDMI Consumer Electronic Control (HDMI CEC) is designed to allow the user to command and control other CEC-enabled devices that are connected through HDMI by using only one of the remote controls; for example one could use the transport controls on the TV remote to control a Blu-ray player, which is quite convenient and potentially cuts down on the number of handsets lying around. In reality we almost always find each manufacturer has a slightly different idea to the others on how it should work and we find that important controls are frequently missing or not where we would expect and thus we find ourselves searching for the original control. There’s no doubt that, for instance, a Toshiba TV controller works well with a Toshiba Blu-ray player but when you begin introducing kit from other manufacturers, it can all seem like more trouble than it’s really worth.

It’s good to see that Toshiba has made some progress in the Smart TV arena this year. Whilst the range of apps and appearance of their Cloud TV Portal remains more or less unchanged, moving around it is a much more rewarding and speedy proposition. We really liked the modern, tiled appearance in any case, so there was no need to change that.

Toshiba’s major new feature for this year comes through the MediaGuide interaction. MediaGuide is a super-powered programme guide with a huge database of information and the new Replay function provides both PVR and a content recommendation engine that will automatically record programmes to connected USB storage. Recordings can also be initiated via apps for iOS and Android and they can be done when you’re not at home through the cloud.

The platform has a good, if not outstanding, selection of video on demand apps including Netflix, YouTube and BBC iPlayer but they could use a few more catch-up services. Media playback over the network has also been improved as has the HTML5 capable web browser, which is only hamstrung by a cumbersome control scheme. That doesn’t hugely take away from what is a very creditable Smart TV platform which will serve the needs of all but the most demanding.