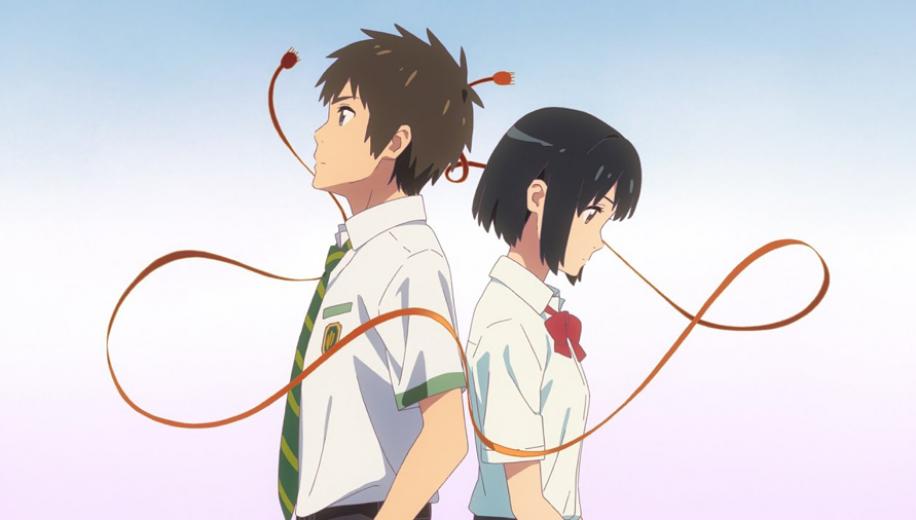 When Taki and Mitsuha wake up in each others bodies neither of them realise the impact it will have on the rest of their lives.

Originally released in 2016, Your Name was a huge success, receiving heavy praise from fans and critics alike. Now in 2017 it is set to be re-released and this time it's being shown in all its glory on IMAX screens across the UK - the first anime to do this. Your Name opens as a meteor passes miles above Japan illuminating the sky with iridescent colours which seems to signify that something magical looms on the horizon. Mitsuha Miyamizu (Mone Kamishiraishi) is a young school girl living in a remote mountain village in Japan. Mitsuha’s family comes from a long line of tradition and is headed up by her elderly grandmother.

Mitusha seems destined to continue these traditions, which her grandmother tells her and her younger sister, signifies both space and time and how they intertwine. But Mitsuha is desperate to escape her simple village life of ritual and tradition. She longs to be in the big city of Tokyo, so when Mitsuha wakes up one morning as usual it comes as more than a bit of a shock when she realises she is not only no longer in her own bedroom but she is no longer in her own body. Mitsuha is in the body of Taki Tachibana (Ryûnosuke Kamiki) a young schoolboy who lives in Toyko - who’s soul has traded places with Mitsuha and awoken in her body. This swapping of bodies continues to take place at random and as neither of them have any recollection of what the other did whilst in the other's body they resort to leaving diary entries in each others phones and notes in schoolbooks. It’s during the initial learning curve of being in a new body that Your Name has it’s most fun. While Mitsuha relishes being in the big city able to gorge on delicious deserts that cost what she could live on for months back home, Taki begins feeling his way through being a girl, literally. Whereas before Mitsuha was a bit of an outsider, when Taki takes her place she is bold and brash and doesn’t take crap from anyone. Similarly Taki is given a softer, more feminine side when Mitsuha takes his place.

But this is no ordinary tale of two people switching bodies. It’s certainly no Freaky Friday. About a third into it, Your Name takes a drastic turn and all the elements that seemed incidental, that were running in the background now take the foreground and become intrinsic to the future, past and present of our two characters.


Written and directed by Makoto Shinkai Your Name is just pure enjoyment. Tipped to be the next Hayao Miyazaki, Shinkai has definitely demonstrated his capabilities here. Visually Your Name is sensational. It’s a film that sucks you in and is quick to make you forget you’re watching an animated film. The colours are both so vivid and delicate at the same time; there is moment midway when the texture changes into pastel watercolours, but it doesn’t ruin the flow of the film and remains effortlessly a part of the whole story. The location scenery is sumptuous and beautiful and almost makes you want to step into this world to explore it for yourself. Time lapse is used to show the passing of time and despite it being animation still looks marvellous. Shinkai blends the worlds of urban city living with the simplistic world of the small village, and similarly with the use of time and its continuous flow back and forth.

The J-pop/rock soundtrack adds another fun element matching the range of emotion our characters go through. The frequent images of doors sliding open and shut might remind some of Sliding Doors but it goes even further and conjures up that old saying: ‘when one door shuts, another one opens’ - foregrounding this tale in opportunities lost and found.

Your Name is a funny, tense, exciting, at times heartbreaking and heart warming tale that explores the difficulties of growing up and a longing for something unknown. I would find it hard to imagine anyone not enjoying this film as its blend of humour and emotion provided something for everyone. It also ends in the most perfect way, not attempting to explain anything more than it has to and leaves the audience with just enough narrative closure for it to retain its sense of magical mystery.