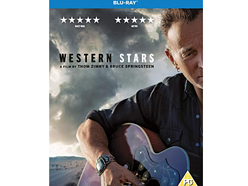 Win a copy of Western Stars on Blu-ray

Win a copy of Western Stars on Blu-ray
Competition Discussion

To celebrate the release, we are giving one lucky winner the chance to get their hands on a Blu-ray™.

Springsteen’s first studio album in five years, Western Stars marks a departure for the legendary singer/songwriter while still drawing on his roots. Touching on themes of love and loss, loneliness and family and the inexorable passage of time, the documentary film evokes the American West—both the mythic and the hardscrabble—weaving archival footage and Springsteen’s personal narration with song to tell the story.

Western Stars which is Springsteen’s 19th studio album, has achieved worldwide success and earned rave reviews. It has been #1 on the iTunes charts on every continent, including such countries as the U.S., the UK, Belgium, Germany, Spain, Italy, the Netherlands, Australia, India, South Africa, and all of Scandinavia, among other countries.

WESTERN STARS is written and performed by Bruce Springsteen, with special guest Patti Scialfa. Thom Zimny, Jon Landau, Barbara Carr and George Travis produced the film, with Springsteen executive producing. The original score is by Springsteen. Joe DeSalvo served as director of photography, and Zimny was the editor.

This competition is open to all eligible AVForums members who are in the Well-Known Member User Group or above, who are not blocking adverts, and who are subscribed to our newsletter.
Our newsletters contain summaries of the latest news and reviews, competitions, podcasts and exclusive special offers. Subscribe now. You can unsubscribe at any time by changing your preferences.

For more competitions go to Competitions.
Movie Review Co-ordinator
The Best Blu-ray and Movie Resource AVForums Movie Reviews Bookmark it now!
My opinions expressed here are not necessarily those of the AV Forums or the associated websites
You must log in or register to reply here.
Share:
Facebook Twitter Reddit Pinterest Tumblr WhatsApp Email Link
Competition Discussion
Top Bottom